News
Business
Movies
Sports
Cricket
Get Ahead
Money Tips
Shopping
Sign in  |  Create a Rediffmail account
Rediff.com  » News » 'The 23 can't force a split in the Congress'

'If the leadership goes back to Rahul Gandhi, then there will be a perception problem about the drama about his exit a year-and-a-half ago.' 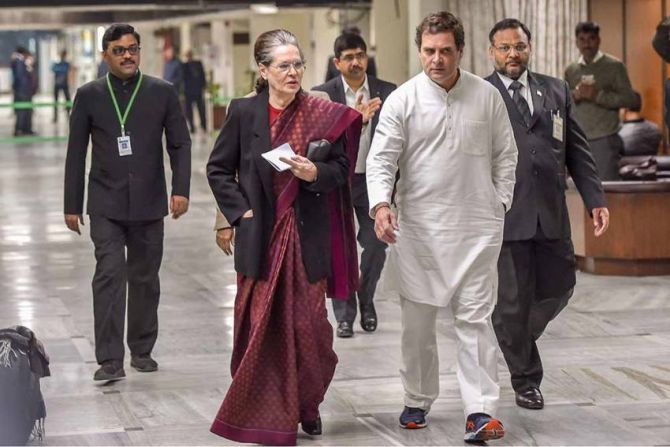 "When Virendra Sehwag is batting in full form, no matter who the bowler is and how well he is bowling, a bouncer will be smashed for a six and nicks will go for 4s."

"That's how it happens even in politics."

"It's the moment in political time where the BJP and Modi are in such a commanding position," Rahul Verma, political analyst and Fellow at the Centre for Policy Research (CPR), tells Rediff.com's Archana Masih. The first of a two-part interview:

Is there now an anti-Gandhi camp in the Congress party?

After the 2019 debacle, things didn't improve and the future continues to look bleak.

The upcoming Bihar election does not bode well for the Congress.

The four states going to the polls next year -- West Bengal, Tamil Nadu, Kerala and Assam -- except for Kerala and Assam, the Congress does not have a chance in the other two.

If things don't get better, they might perform badly in Assam and Kerala too, so there is a section within the party which clearly sees that if the party continues to decline, their own political careers are at stake.

Last month when Sonia Gandhi was having a regular meeting with party MPs, the confrontation came out in the open.

The main issue is the leadership of the party, which still remains unchanged after the CWC meeting. The much discussed meeting did not come up with a solution to that vital problem of the Congress.

There were two points that were made in the letter: One, to counter a leader like Modi you need a leadership that is present at the party office at all times.

Second, the need for an organisational revival at every level. The group of 23 leaders said that organisational elections will throw up new leadership at the block, district and state level and perhaps even at the national level.

The letter writers have been also cautious of not saying a single word or sentence against the Gandhis.

I see it as a group voicing concern, but not an open rebellion.

Both sides are trying to mobilise the party and public opinion in their favour.

One set is saying the Gandhis should be at the helm of affairs and the second set is trying to mount more pressure on the top leadership to take some action about their genuine questions.

Even if not said, there is a sort of unanimity over the issue of leadership and organisational atrophy. Salman Khurshid also wrote in the Indian Express saying there is also a problem of the dilution of ideology.

These three buckets need to be dealt simultaneously.

I think the idea behind this letter was that if you get a new leadership and begin the process of organisational revival, the ideological component will get aligned.

Will a non-Gandhi leader give the Congress a better chance to take on the BJP?

Perhaps, but we are not sure about that. One of the arguments which is mounted against a non-Gandhi leadership is by the Leader of Opposition in the Lok Sabha, Adhir Ranjan Chowdhury. He has said that the Congress performed poorly during a non-Gandhi leader.

It is only once Mrs Sonia Gandhi took the reins in 2000 that the party's prospects improved.

There is this historical evidence which people like Adhir Ranjan are citing that there is no leader within the Congress except the Gandhis who have the full support of the party leadership across the country or party cadres. There is also the fear that the Congress would fragment if a non Gandhi leads the party.

It's a difficult choice that the Congress needs to make. Even if you get a non-Gandhi leader, most of them have a segmental presence and one doesn't know whether the party will rally behind them.

And whoever that leader is will be pitted against Narendra Modi?

I use the cricket example. When Virendra Sehwag is batting in full form, no matter who the bowler is and how well he is bowling, a bouncer will be smashed for a six and nicks will go for 4s.

Sehwag is in such a commanding position that the bowler doesn't have a control on the game. That's how it happens even in politics.

It's the moment in political time where the BJP and Modi are in such a commanding position that you need an alignment of many forces together if you have to challenge them.

Getting a leader is not enough. The Congress needs organisations, a counter ideology to mobilise upon and even if you get all that, you need resources -- money, manpower and presence in media -- to counter a force like the BJP at this moment in time.

It's not an easy task.

Have the tables turned because there was a moment in time when the Congress was in a similar commanding position?

When the Congress was in a commanding position during Nehru or Indira Gandhi's time, the Opposition did not lack leadership -- there was Deen Dayal Upadhyay, Atal Bihari Vajpayee of the Jan Sangh; there was Ram Manohar Lohia of the Socialist camp, they had leaders, an organisation and an ideology, but that was a moment in political time where one idea, one leader, one party was so dominating that it did not make a difference whatever other parties were doing.

What is the possibility of a non-Gandhi as Congress president?

It is a difficult proposition because then it has to be seen whether it will be through an electoral contest and if that contest is between two-three non-Gandhi members or a Gandhi is also present in that contest.

If the Gandhis contest, then the battle will be one-sided, much like when Jitendra Prasada contested against Sonia Gandhi in 2001.

Even if a non-Gandhi does get to lead the party, even in that scenario, one doesn't know if s/he will get a free hand or the power centre will rest with the Gandhis.

It seems a difficult proposition, but it's not an impossible proposition given the nature of the crisis.

What are your thoughts on the Congress crisis that was initiated by the letter written by some party members? Is the grand old party coming apart?

What happened in the Congress party yesterday (August 24, 2020) was brewing for some time.

My first reaction to the letter was that this will just pass, but when Sonia Gandhi also wrote a letter, things looked serious.

The reason I say this was in the making is that because after the 2019 election result and Rahul Gandhi's resignation as party president, he had written a letter mentioning that there were leaders who cared only for themselves or their children's electoral victory, but not for the party.

He also made it known that he felt that he had been taking on Modi and his government without support from leaders within the Congress.

The leaders who were considered part of his team were slowly sidelined, like Ashok Tanwar in Haryana, Pradyot Deb Barman in Tripura, Ajay Kumar in Jharkhand or Jyotiraditya Scindia in Madhya Pradesh.

What are the likely scenarios about the crucial leadership issue for the party?

There are three possible scenarios. One is that nothing happens, which is basically either Sonia continues or Rahul Gandhi takes over the reins. That's why the letter writers said the Gandhis should be part of the collective leadership.

But if the leadership goes back to Rahul Gandhi, then there will be a perception problem about the drama about his exit a year-and-a-half ago.

Though this group of 23 has some significant heavyweights, none of them have a national presence. They can't force a split in the party, especially given that most of the formal positions within the party are still controlled by people who are part of the pro-Gandhi camp.