'In spirit, and more importantly in its DNA, this is the Congress Inc, or Incorporated, a family-run entity,' notes Saisuresh Sivaswamy. 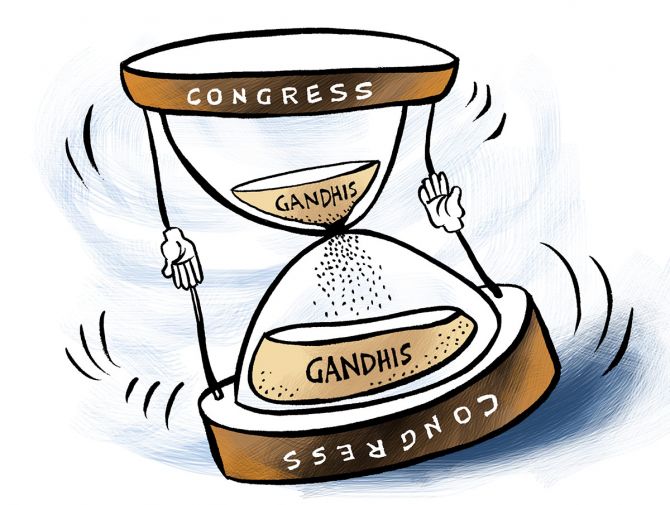 After seven-hour deliberations on Monday, August 24, the Congress Working Committee finally decided that Sonia Gandhi will continue as its interim president and that a new party chief will be elected in the next six months.

The word ANI, the news agency, chose to put out in its tweet was 'elected', and not 'selected'.

Those whose hearts go aflutter at the mere mention the possibility of internal democracy being restored in the Congress party may please take a deep breath. By design or otherwise, the CWC member who made the announcement, K H Muniyappa, may have omitted to say 'elected unanimously'.

One doesn't have to be a forecaster to divine what the outcome six months hence, or however long the process may take, will be.

If Sonia Gandhi finally puts her foot down, and her impetuous son Rahul Gandhi decides to swallow his pride along with his famous words in the past when he spoke of the need for a non-Gandhi to head the party, it will be the final acceptance by the family of its irreplaceability in the affairs of the country's oldest political party.

The current travails of the Congress party owes as much to its electoral routs as to the failure of its founding family to accept its role as the nucleus that keeps the Congress going.

I say 'founding family' with forethought aplenty. Before I am given a lesson in the efforts of A O Hume and others, let me clarify that the Indian National Congress of yore, the grand umbrella that brought under its aegis all Indians and which was the spearhead of the freedom movement, lies long interred.

Courts may have given their verdicts that the present outfit occupying 24, Akbar Road is the real INC, but that would be merely in nomenclature.

In spirit, and more importantly in its DNA, this is the Congress Inc, or Incorporated, a family-run entity.

This is how its founder Indira Gandhi envisaged the party that she cleaved out of the original Congress. The family were the promoters, to use a business analogy, and like most promoters they were not going away anywhere.

In her mind there was never an iota of doubt about what she was doing. Which was to ensure that it was the Nehru-Gandhis that remained the custodians of the party's interests, never mind what her father and democrat Jawaharlal Nehru would have wanted.

She cleverly altered the party's DNA to convert it from an open house of ideas and ideologies into one that would genuflect at the altar of the family.

In doing this she was aided by a party coterie that saw her as the savior of their political, and electoral, fortunes.

And why not, she was after all giving them good Return on Investments in terms of electoral victories, after converting the electoral process into a vote on her appeal or charisma than on performance.

So all those who chafe at the cult of personality being practised today, please refer back to the 1980s for the original script.

Because Indira had converted India's vehicle of independence into a personal fiefdom, she could effortlessly pass off her sons Sanjay first and Rajiv later as her heirs.

The former, given his long apprenticeship under her, saw no conflict in stepping into her shoes; if the latter, a reluctant entrant at first, harboured any misgivings, they must have evaporated in the first flush of his 400-plus Lok Sabha seat victory.

She too had no conflict in her mind when she decided to dump Sitaram Kesri and take over the party herself in 1998.

Her initial electoral forays may not have served the party well, but she endured, believing in her own destiny, and it paid handsome dividends: Two election victories in 2004 and 2009.

Her children, alas, have been disappointments, not to her maybe, but probably to the polity, and most certainly to the party they treat so disdainfully.

Being third generation heirs, perhaps they are filled with a sense of entitlement, even a strange self-belief that all they have to do is make a show and the voters will break the polling booths down in their eagerness to vote them to power.

Perhaps it was so with their grandmother.

Maybe with their father even, but by his second outing even his magic was clearly on the fade.

Their mother had a lonely toil, overcoming limitations of language and culture to lead a party in a manner where she still remains the refuge of last resort.

And because things are not going their way, according to the script they have come armed with, her children find it easier to blame the party organisation for not backing them, go into a sulk in the face of electoral defeats, all the while refusing to see that the game has changed.

Their opponent is not the same. He was a weakling earlier, today he is gargantuan.

In many states their allies can at best be described as frenemies.

The simmering discontent they sense in the party they are beholden to lead, is not one a sign of revolt. Congressmen know their limitations, and while they may squabble among themselves they will not dare take on the family. Even that second-generation rebel, Sachin Pilot, has been clear that only the Gandhis can lead the party.

But the partymen are upset, as any shareholder in a company will be when their RoI is abysmal, which is okay, but only if the promoters showed some seriousness in running the company. Only if they don't wish to fulfill their role, would they seek a replacement.

Which is what happened on Monday over seven hours.

The party has since said that it will elect a new president in six months. But as the Bard said although in more macabre circumstances, if it were done when 'tis done, then 'twere well it were done quickly.