Even as Congress interim president Sonia Gandhi asked the Congress Working Committee members to relieve her from the top post, senior party leaders Manmohan Singh and AK Antony said that she should continue till a new party president is elected, sources said. 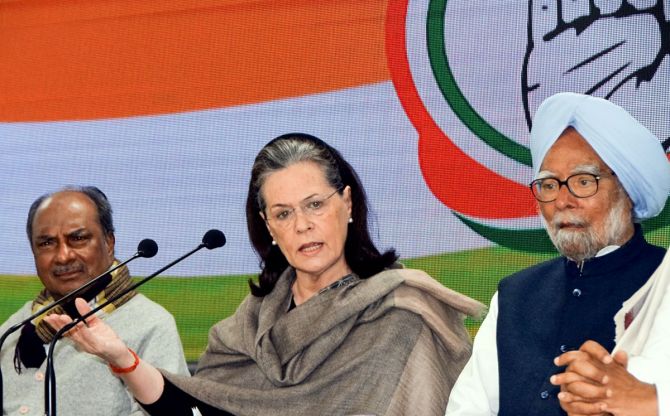 Congress interim president Sonia Gandhi asked CWC members "to begin deliberations towards the process of transition to relieve her from the duty of party chief", sources said.

In the virtual meeting, she asked the CWC members to proceed with the process of electing a new President, sources said.

The crucial meeting of the CWC is being held after a controversy erupted over a letter by more than 20 senior leaders calling for 'full time' active leadership, sweeping reforms and raising questions about the party's condition and direction, as well as demanding the election of the CWC.

At the meeting, Congress leader Rahul Gandhi questioned the timing of letter by party colleagues and criticised the move saying that it came when Sonia Gandhi was admitted to a hospital.

"Sonia Gandhi says she has given a note to KC Venugopal, and he will read it out. Rahul Gandhi pointed at the timing of the letter by party colleagues and criticised it," sources said.

"Rahul Gandhi said, why was the letter (over party leadership) sent at a time when Sonia Gandhi was admitted in a hospital," sources said.

Sonia Gandhi was appointed as an interim president on August 10, 2019, by the CWC, after Rahul Gandhi stepped down as party chief, taking the responsibility for party's disastrous defeat in 2019 Lok Sabha elections.

Congress seems divided over the issue. Gandhi family loyalists and Congress Chief Ministers took on the section of leaders who signed the letter and rallied behind the Gandhi family, calling for Sonia Gandhi to stay or Rahul Gandhi to take charge again.