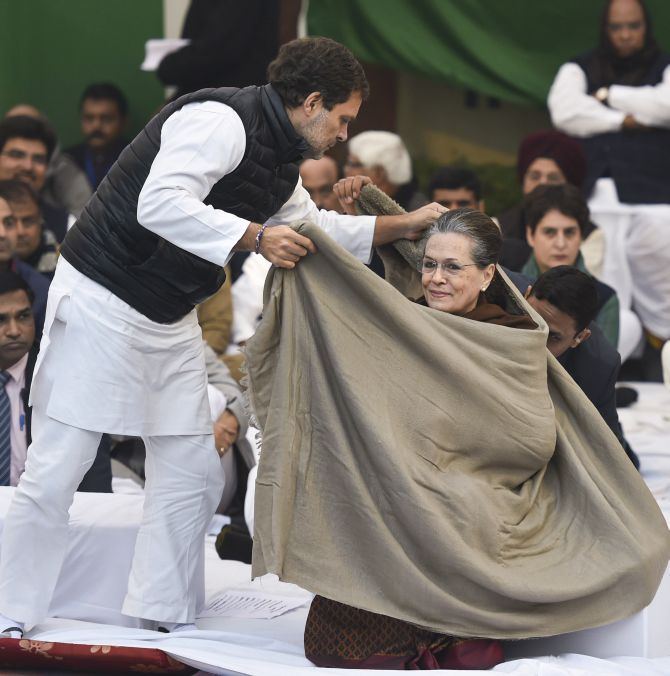 What is going on in the Congress party?

Nobody knows who is in control even as Sonia Gandhi continues to hold the post of interim president -- she will complete a year in office next month.

Syed Firdaus Ashraf/Rediff.com spoke to veteran Congress watcher Rasheed Kidwai -- a Visiting Fellow at the Observer Research Foundation and the author of two books on the party: 24 Akbar Road and Sonia-A Biography -- to understand the convulsions with the nation's oldest political party against the backdrop of the battle between Congress leaders in Rajasthan this week.

In your question lies the answer. It is for the Congress party to decide and take a call.

Today, the Congress is expecting the Gandhi family to decide about themselves, which is extraordinary and a difficult thing to do.

The Congress is not putting any pressure on them. After the defeat in the 2019 election, Rahul Gandhi had resigned and he was quite serious about it.

He also put a precondition that no member of the Gandhi family should become Congress president.

It was a very idealistic position, but for almost a year nothing happened.

The status quo still holds and when there was a head count, they made Sonia Gandhi interim president of the party. This arrangement still continues.

Now, I don't understand why no one from the Congress throws a leadership challenge to them or forces a contest.

In the 2019 election, 52 Congressmen were elected and there has to be a party leader in the Lok Sabha.

Rahul could have become the leader, but he was not in contention. So, my question to Shashi Tharoor and Manish Tewari is why did they not force a contest for the Congress Lok Sabha leader's post?

They left this decision to Sonia Gandhi who appointed Adhir Ranjan Chowdhury who is not equipped to take on the Modi government in Parliament.

Why is it that the Gandhis are the only glue left for Congressmen?

In a political party there is a transactional relationship and it is not based on faith.

The Gandhis are the glue because they have delivered power time and again.

The same way the Congress lost power in 1996 after the P V Narasimha government was voted out and Sonia Gandhi brought back the party to power in 2004 and ruled till 2014.

It was a great comeback under Sonia Gandhi's leadership.

Congressmen are almost unanimous that the Gandhis have a pan-Indian identity and they have the ability to win.

Also, when it comes to Parliament elections, there are key campaigners like Modi is for the BJP.

And in the Congress, all party candidates across India ask for three names to campaign -- Rahul Gandhi, Priyanka and Sonia Gandhi. Whether they go or not, it is a different story. There is clamour for them.

And after them, the candidates demand star celebrity campaigners like Raj Babbar, Nagma Morarji, Urmila Matondkar or cricketer Azharuddin, Navjot Singh Sidhu who are celebrities.

The other Congress leaders like general secretaries and people in other posts are not sought by contesting Congress candidates except in their own areas.

Even Sachin Pilot and Jyotiraditya Scindia, when he was in the Congress, were not called across India by Congress candidates to seek votes for them.

Even Captain Amarinder Singh -- he is a big leader and is sought after in Punjab, but not in other places like Maharashtra or Mizoram.

Even Shashi Tharoor is in demand in one or two southern states, but he will not be able to attract crowds in Jalandhar or Indore.

This is a major problem for the Congress as they (the Gandhis) are the ones who have a pan-Indian identity.

In 1977, when the Congress lost power for the first time, Indira Gandhi knew what was needed to come back to power. But today's Congress leaders seem to have no idea how to get back into the reckoning.
What is missing? Political savvy or fire in the belly?

The Congress is passing through difficult times and the 2019 defeat had a huge psychological impact on them.

It was not so much in 2014 as they were expecting they would lose the elections.

Rahul Gandhi lost, Jyotiraditya Scindia lost and this had a huge demoralising effect on them.

And when you are beaten and out, you are either determined to get back and fight the enemy, or the other option is to blame yourselves and be in self-pity mode.

This is exactly what is happening to the Congress.

Many people publicly and privately blame Rahul Gandhi for it.

For example, Scindia feels he lost the elections in Guna (Madhya Pradesh) in 2019 because of Rahul as people felt the election was between Rahul and Modi.

And people chose Modi although the people had nothing against him (Jyotiraditya).

In Rajasthan, the Congress drew a blank and did not win a single seat out of 25 parliamentary seats. The party won 100 seats in the assembly election which was held a few months earlier and formed the state government.

This loss in Rajasthan was also attributed to Rahul.

And the party stopped looking at the enemy and started behaving in self-pity and false sense of victimhood.

In 2018, after winning Madhya Pradesh, Rajasthan and Chhattisgarh, it looked like the idea of a 'Congress-mukt Bharat' was not possible. But in two years' time it looks like it is a possibility once again.
What went wrong in this time?

Before these elections, the Congress gave a good fight to the BJP in the Gujarat assembly election too where they won a good number of seats.

The problem is that the magnitude of defeat in the parliamentary elections was very bad.

If you take a train from Gorakhpur in Uttar Pradesh to Chhatrapati Shivaji Terminus in Mumbai, you will not come across a single sitting Congress MP's constituency.

In the same way there are many such train routes in India which do not have a single Congress member of Parliament.

This has shaken the Congress party's confidence.

Is the power struggle between the old guard and the new generation of Congress leaders for real? Or is there something else brewing in the party which we don't know about?

It is just a kind of façade and some bit of media creation.

You have a very successful chief minister in Amarinder Singh and Puducherry Chief Minister V Narayanswamy.

And then you had Kamal Nath who got toppled. Now Ashok Gehlot has faced this internal rebellion. They all were doing good work.

In India, generally once you reach 45-50 you are middle-aged unless you are a Bollywood hero.

Mahatma Gandhi was not young (Mohandas Gandhi was 45 when he returned from South Africa on January 9, 1915) when he came to India and launched his freedom movement to liberate India from British rule.

Jayaprakash Narayan was not young when he stood up against Indira Gandhi in the 1970s.

V P Singh was not young when he stood up against the brute majority of Rajiv Gandhi and neither was (Kisan Baburao) 'Anna' Hazare when he started his India Against Corruption movement during Dr Manmohan Singh's tenure.

Look at the BJP, if (Uttar Pradesh Chief Minister) Yogi Adityanath is doing a good job so is (Karnataka Chief Minister Bookanakere Siddalingappa) Yediurappa who is over 75.

Are there really two camps in the Congress with elderly leaders like Digvijaya Singh, Kamal Nath and Ashok Gehlot on one side and pitched against younger leaders on the other side?

The whole fight is about who controls and has proximity to the Gandhi family.

In the Congress, there is an unwritten law that the Gandhis cannot be questioned, as I told you earlier about the transactional relationship they have with them. And people are vying to be close to them as their coterie and advisors or office-bearers.

There are around 150 people who are Congress legislature party leaders or Pradesh Congress committee chiefs etc. All the others are out in the cold.

Sonia, Rahul and Priyanka are never to be blamed or questioned, but the blame should be on others like K C Venugopal, Ghulam Nabi Azad and others who are party managers.

People forget that these party managers are chosen by the Gandhis.

Are Sonia Gandhi, Rahul and Priyanka on the same page while taking decisions and running the party's affairs?

It can be said without hesitation that Rahul, Priyanka and Sonia Gandhi enjoy perfect relations of mother-daughter-son all together in the family.

Nowhere in history and in the contemporary democratic system do you have three members of family out in the field.

You see Mayawati running the show on her own.

Mulayam Singh was running the show with his son Akhilesh, but then opted out because Akhilesh's style of functioning was different from him.

Sanjay and Indira were together, but the result of their joint rule was disastrous and Sanjay died very young.

And when two or three people work together, decision-making becomes very tardy.

If there was some powerful Congress leader at the top with decisive decision-making, he would have asked both Pilot and Gehlot to resign and appointed someone else in their place as chief minister of Rajasthan, but the Congress does not have that one person who is on top.

Sonia Gandhi would look at the old guard like Ashok Gehlot on what he has done for the party since 1971 onwards.

Priyanka would look at Sachin like a generation next leader and a younger brother.

Whereas Rahul would think some other thing.

By doing such acts 18 months passed in Rajasthan.

Can we then say that Rahul, Priyanka and Sonia are not on the same page?

This is inherent. I won't say they are at loggerheads.

Every individual has a very different leadership style. This is part and parcel of human personality.