News
Business
Movies
Sports
Cricket
Get Ahead
Money Tips
Shopping
Sign in  |  Create a Rediffmail account
Rediff.com  » Movies » When dancing around a TREE was so much FUN!

One of the most commonly used phrases in context of our movies is 'dancing around trees.'

To the world they provide fresh air, fruits, shade and shelter, all this and more but in Bollywood, their role extends beyond the usual -- sometimes as spectators of romance, sometimes a shoulder to cry on.

After looking at how the terrace, chandelier, jhoola and balloons added to the silver screen imagery, Sukanya Verma lists the memorable use of trees in Hindi movies. Raveena Tandon doing the classic 'dancing around trees' routine for a romantic song of one of the biggest hits of her career. 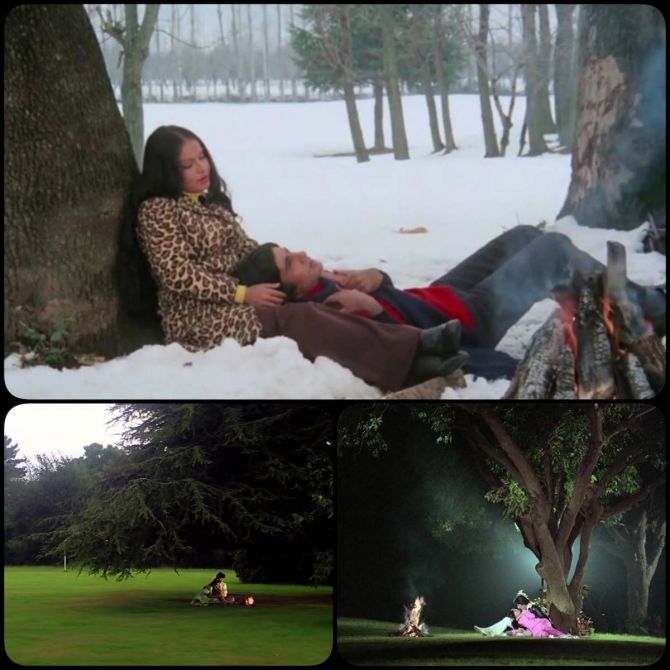 Lovebirds snuggling over a campfire under a large tree in scenic Switzerland or Kashmir is signature Yash Chopra romance.

Aamir Khan and Juhi Chawla's Hansel and Gretel-like attempts to find their way home through a thick forest leads to much fun and flirtations. 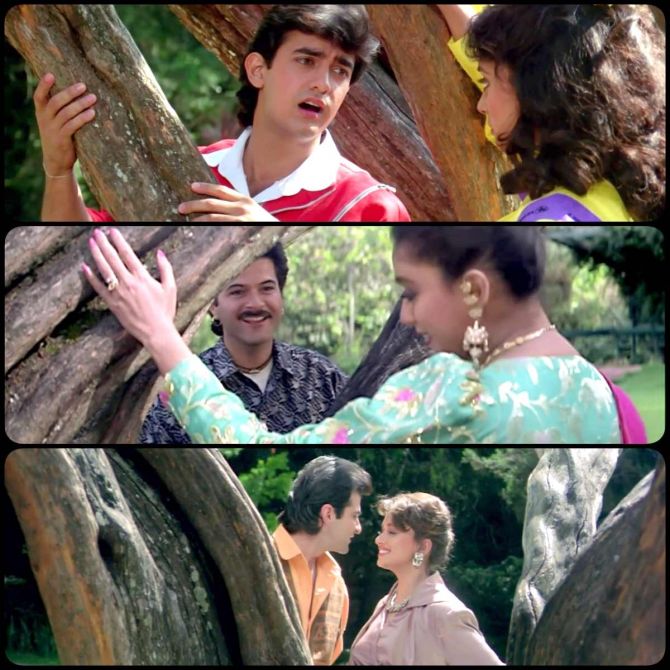 While on the subject of trees, can Inder Kumar's lucky tree be far behind? Every time he shot Madhuri Dixit romancing her hero around this blessed tree in films like Dil, Beta and Raja, it bore sweet fruits at the box office.

Astrological beliefs weigh heavy on Suraj Sharma in Phillauri after his manglik status compels him to tie the knot to a tree before he weds his childhood sweetheart.

Except the tree, which is chopped off after the deed, happens to be haunted by the happy-go-lucky spirit of Anushka Sharma.

Save the tree is an unlikely sub-plot in Saif Ali Khan's Jawaani Jaaneman where he plays an estate broker swindling a woman's property by giving her false hopes of retaining her beloved willow tree. But you already know he will keep the tree and his conscience, don't you? 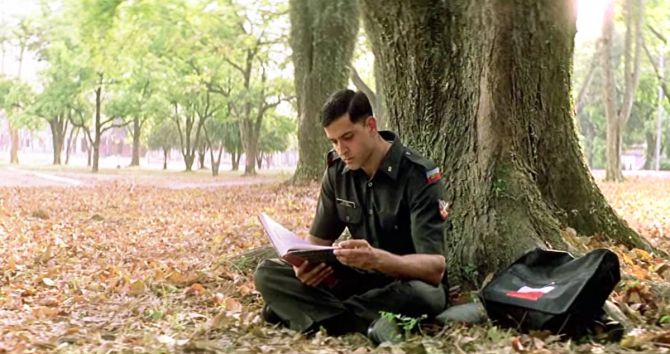 Hrithik Roshan's coming-of-age in Lakshya is full of stunning visuals. Like this serene, studious pose of his cadet reading in solitude on a bed of golden leaves. Tree of enlightenment? You bet.

Shoojit Sircar's soulful story of love and loss finds a symbolic motif in the shuili (night jasmine) tree. Be it in the name of the character (Banita Sandhu) it centres on or her fondness for its fragrant flowers, which gradually bloom into unconditional love in her colleague's heart.

In Vikramaditya Motwane's loose adaptation of O Henry's short story, The Last Leaf, an ailing Sonakshi Sinha is obsessed with the tree outside her window. She keenly believes she'll die the day the last leaf falls.

As the man who did her wrong, Ranveer Singh atones by tying a fake one to the branch while encouraging her to not give up on life. Remember the time Pooja Bedi decided to teach two-timing Deepak Tijori a lesson under 'Peele phoolon wala pedh' along with partner-in-crime Aamir Khan by releasing buckets of cow poo tied up to the top of a tree.

That bit about a shoulder to cry on we mentioned earlier on? Vijayta Pandit shows how it's done in her debut, Love Story.

Supernatural activities occur around an enchanted tree sporting curious puppets and spirits acting as narrator and catalysts in Shah Rukh Khan and Rani Mukerji's tale of fantasy and emancipation. When instead of birds or broken kites, you discover knee high ghosts perched on the branch of a creepy tree in front of your home, brace yourself for the horrors of house warming in Vaastu Shastra. 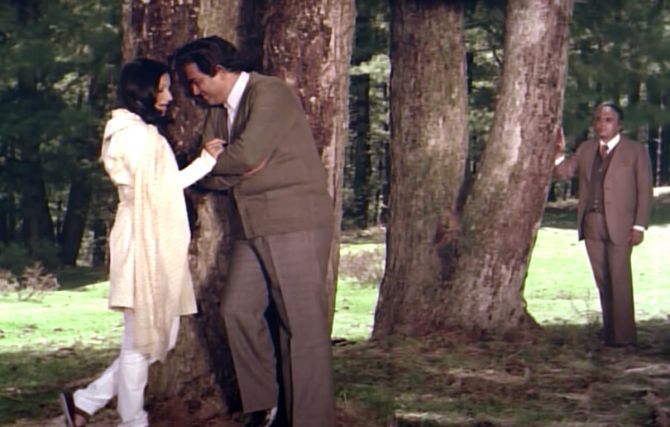 Who needs photo albums when you can revisit old memories from behind a tree like Sanjeev Kumar's reminiscing about 'fursat ke raat din' in Mausam? Who can forget a roly-poly Raj Kapoor playing a bagpiper on the branch while proposing to his dear Radha and rudely interrupting her private swimming session in Sangam?

Revenge at its most sensational, this. 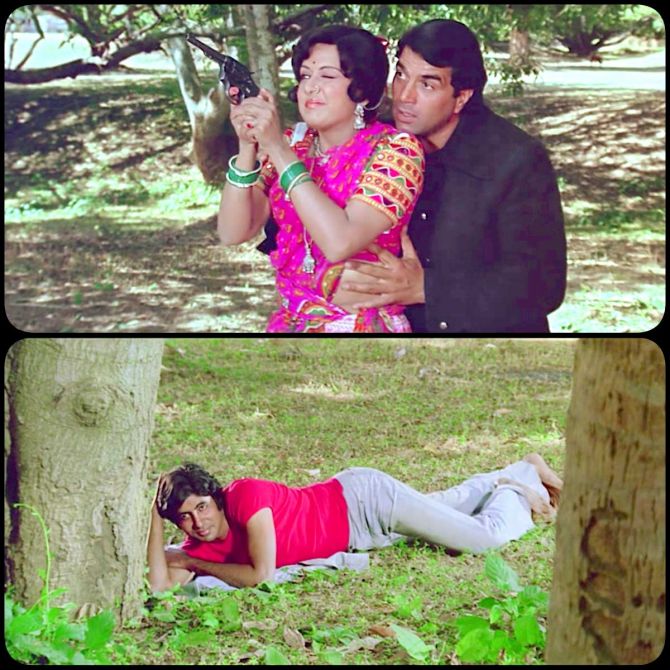 Everybody loves mangoes. Dharmendra takes advantage of Hema Malini's craving for some under the pretext of teaching her how to take an aim while an amused Amitabh Bachchan watches in Sholay's amusing tree moment.

Shah Rukh Khan lays out a tree trap and does his best roaring voice to scare the living daylights out of Parmeet Sethi to sabotage his Dulhania's wedding in Aditya Chopra's directorial debut. 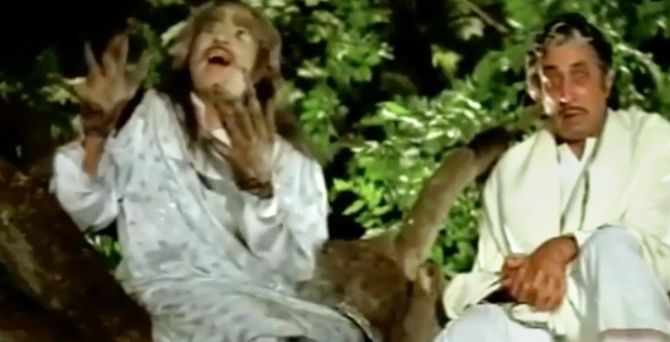 In this forgettable flop starring Aamir Khan, Shakti Kapoor enjoys the meatiest part in the double role of father-son whose greed results in hilariously haunting the same damned tree. 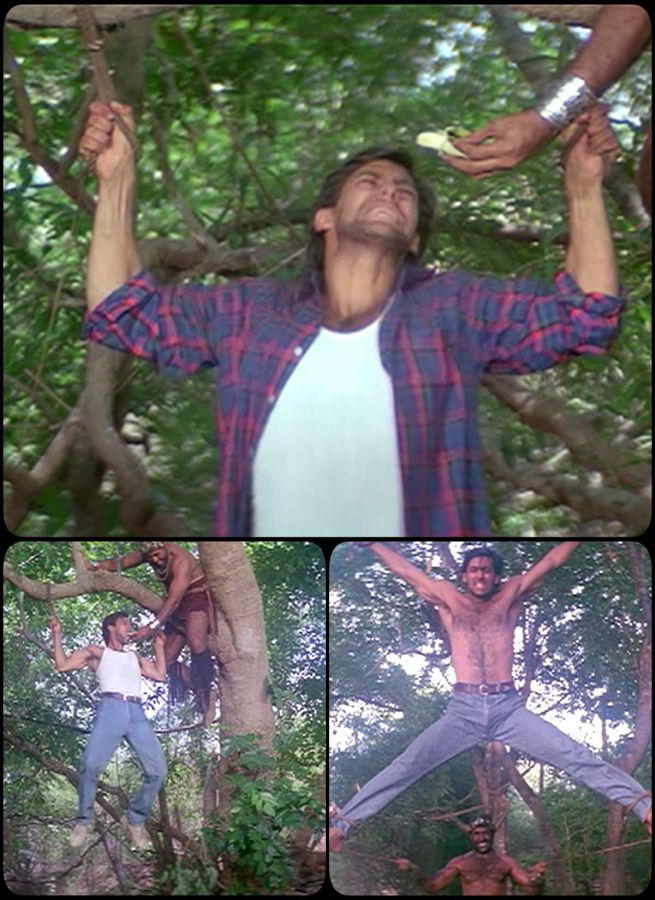 Look who beat Kung Fu Panda's idea of Master Shifu teasing Po with dumplings as part of his kung fu training? The secret of Salman Khan's scrawny to brawny turn in Jagruti under banana-offering trainer Puneet Issar's watchful eye is all kinds of entertaining. 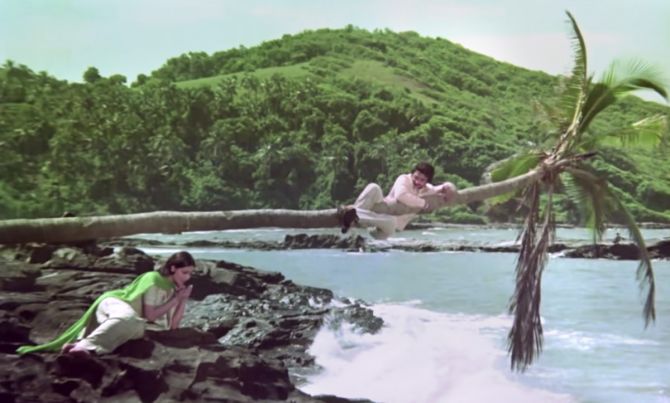 Musical rendezvous in a lift, switching the room lights on and off, doodling one's name on all the walls of a room, Kamal Haasan and Rati Agnihotri's romance in Ek Duuje Ke Liye is high on madcap visuals. Here's one featuring a tree. Technically it's not Bollywood, but Baahubali is much too beloved and imaginative in how it uses a palm tree like a catapult to toss warriors inside enemy space to ignore. 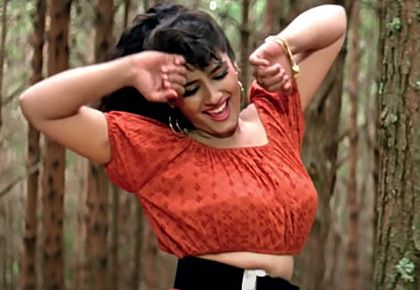 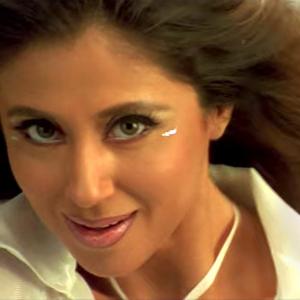 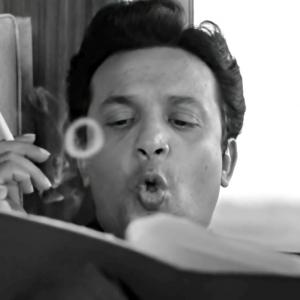