News
Business
Movies
Sports
Cricket
Get Ahead
Money Tips
Shopping
Sign in  |  Create a Rediffmail account
Rediff.com  » Business » Why we import what we do from China

We import from China not because we love China, but because they sell us these things at cheap prices, points out Rathin Roy.
Illustration: Uttam Ghosh/Rediff.com 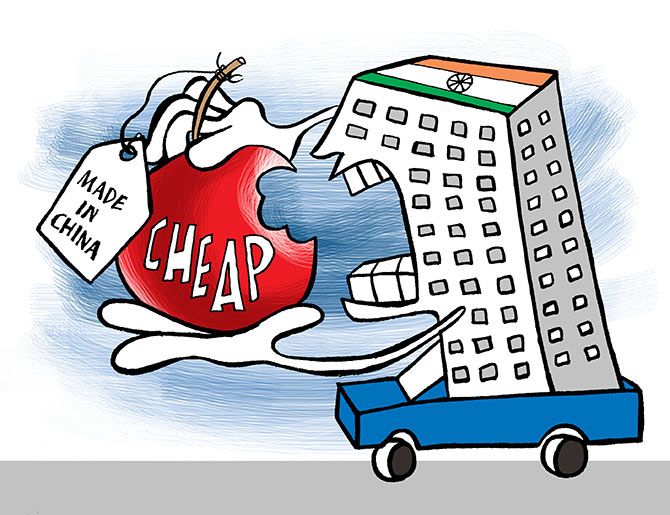 In the wake of the growing military tension on the India-China border, there have been calls for boycott of Chinese products. These have little impact on strategic reality. Equally, the plea that India cannot afford to do without Chinese imports is not a truism.

If bilateral tensions escalate, then there may be a scenario in which India and China cease to trade.

How would the Indian economy be hit in such a situation? That would depend on the extent to which India is able to do without Chinese imports and investment.

In this extreme circumstance, the situation is not dire.

First, thanks to the Covid pandemic, global trade is declining and India's exports and imports are falling, the latter more than the former.

So, we are importing less of everything, including from China.

Second, organic chemicals are the biggest single import from China; but these can be procured easily, albeit more expensively, from other countries.

Imports of electrical machinery from China, the other major strategic good, have been declining since 2017 and a combination of falling trade activity, alternative sourcing plus increased domestic production, will enable us to weather any shock.

The rest -- plastics, smartphones, automobile parts, fast moving consumer goods and toys, among others -- essentially feed the consumption of India's elites and no great harm will be done in a crisis if we consume much less of these.

Finally, Chinese inward investment is not large, and the optics of investment in start-ups obscures the fact that they are in strategically insignificant areas like financial services and food delivery operations.

It is true that two-thirds of inputs for India's pharma industry are sourced from China, but most of these can easily be made in India, albeit more expensively.

The larger structural question is whether we can permanently reduce the share of Chinese imports. This must be seen in context.

India typically incurs a current account deficit, which means that we typically import more goods and services then we export. There are two reasons for this.

We export when the price and quality of what we sell is attractive to foreigners.

We import because the same is attractive to us.

However, as an economy evolves, there is another reason why this may happen, which is that our pattern of consumption becomes more import-intensive.

The story of our Chinese trade imbalance reflects a mix of both the above.

However, this decline has meant largely that we have been importing from other countries, like the United States, Vietnam and Bangladesh. Our current account imbalance remains.

What we buy from China now is:

1. Stuff that we used to manufacture at home, such as organic chemicals, plastics, and electrical machinery. It is just that Chinese productivity in producing these has outstripped Indian productivity for a long time now.

2. Luxury and cheap mass consumption goods. The latter is driven by a worrying change in our output composition since 1991.

The contribution to our total consumption demand (non-services) of things like automobiles and FMCG is very high. These do provide manufacturing employment but are heavily import-intensive, and the cheapest source of such imports -- from mobile phones, to air conditioners, to auto ancillaries -- is China.

This, in turn, is because India's growth story has been all about tapping the consumption power of the top 150 million of the population and this consumption is disproportionately weighed towards import-intensive goods.

We import from China not because we love China but because they sell us these things at cheap prices.

These would not be as import-intensive, except textiles, where we would have to make an effort to improve the productivity and scale of our cheaper synthetic fibre and apparel industry and locate it in lower wage regions of northern and eastern India to compete with imports from China, Bangladesh, and Vietnam.

For the rest, the demand on infrastructure, logistics and intermediates could be comfortably met by supply response from Indian manufacturers.

A scaling up in healthcare provision would automatically incentivise domestic production of active pharmaceutical ingredients.

Education is not import-intensive unless we send our children abroad to study -- which would reduce if India delivered quality, affordable, education.

So the question is not import substitution or export promotion, but, rather, how to raise the productivity of the Indian economy.

This, inter alia, requires a change in the output composition of demand to produce things that a larger segment of Indians wish to consume at affordable prices. This has been the message in all Indian political thought which we ignore at our peril.

Only a focus on what, rather than how much, we consume will counter our strategic vulnerability on the trade front, a threat that has loomed across the course of our development journey since Independence.

Rathin Roy steps down as director, National Institute of Public Finance and Policy next week. The views are personal.