News
Business
Movies
Sports
Cricket
Get Ahead
Money Tips
Shopping
Sign in  |  Create a Rediffmail account
Rediff.com  » Business » 'Why are even our sewing needles made in China?'

'We are not able to manufacture even low-end products as cheaply as China.'
'We are not buying Chinese goods today out of any love for China.' 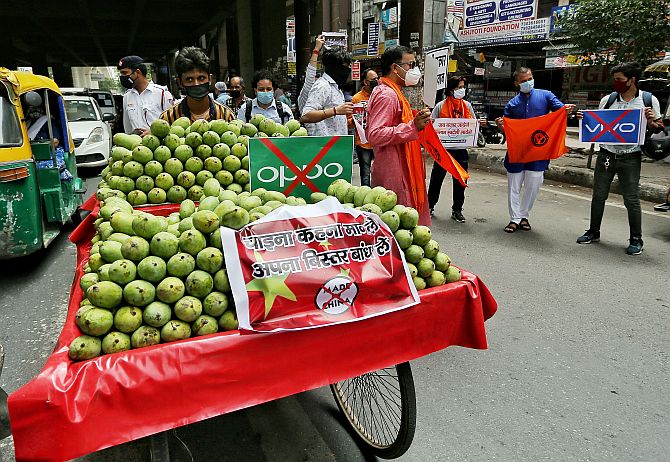 Rathin Roy, director of the National Institution of Public Finance and Policy, steps down in August after a seven-year stint.

"You have two options. Either you accept that you are going to become a more expensive country, or you put in place a plan to produce the things you take from China, more cheaply in India," Roy, a former advisor to Prime Minister Narendra Damodardas Modi, tells Arup Roychoudhury.

Is it just a coincidence that your resignation comes at the same time as Urjit Patel's appointment as chairman of the National Institution of Public Finance and Policy?

The stepping down of Vijay Kelkar as chairman, the appointment of Urjit Patel and my decision to resign are completely separate events.

Dr Patel is a very worthy successor to Dr Kelkar, and I cannot think of anyone better to lead the institution and he has my full support.

He is a man of great international stature, a former RBI governor, and most importantly, he has been a known friend of NIPFP.

If anything, it is a negative that I am resigning at a time when I could have worked with Dr Patel.

I had taken the decision to resign in January.

I was expecting to resign in March, but then COVID came and I wanted to see the institution through the initial phases, which I have done now, therefore I thought this was an opportune moment.

Are there any particular reasons for this decision?

I have felt that I need to move on to new professional challenges and responsibilities, which would allow me to focus more on the policy work I do in advocacy, without the simultaneous need to manage a public institution and to be able to think and speak for myself.

I have had to temper my individual views as they are inevitably associated with the views of the institution.

I want to do more technical work that will not be tempered by institutional curbs.

I also felt that in the circumstances in which India finds itself now it is important for me to be freely and readily available to the wider economic and business community, to be able to put forth my ideas in the public domain and to have the satisfaction of knowing that if these ideas have pick up, that will not be because of my institution but because of my ability to argue a point effectively.

There is also a watershed moment now, with all public institutions, like NIPFP, which have been set up as research think-tanks.

There are competing demands, regarding financial self-sufficiency, and providing research support exclusively to central and governments.

That balance of emphasis is changing somewhat, and I feel a new leadership is required to negotiate this phase. There is a need to explore the idea, for a new leadership, that should NIPFP remain a body dependent on central and state grants or should it branch out to work more with multilateral institutions and private sector.

Essentially, it is a question of whether NIPFP can survive as a public finance and research body whose principal clients are the central and state governments.

As a public figure in policymaking circles, you have been quite blunt and frank with your assessment and criticism. Are there things you want to say which being in your current position have prevented you from saying?

There are two rules to follow. You speak on issues and not on personalities.

And when you speak about problems, you offer solutions. I think I have met both these criteria.

I, however, have other things to say which go beyond the remit of NIPFP as a public finance and macro-economic institution.

I believe a number of problems which India is facing today are not problems of this or that government.

I believe there are deep-seated problems in our society which cause ineffective public spending.

I believe there are issues of political economy which are a constraint on our federal polity.

I am concerned about the weakness of our public finances and the political economy reasons for it.

And these are not things that I can or should speak of with full freedom when I head a public institution.

Coming now to macro-economic issues, they say with crisis comes opportunity. Are there any reforms you would liked to have seen in the COVID pandemic and the resultant economic crisis?

I don't believe that with crisis comes opportunity. When crisis comes, you deal with the crisis.

In the process of dealing with it, you may get some opportunities.

In 1991, dealing with the balance of payments crisis forced the then government's hands to undertake a process of liberalisation.

I don't think the situation is the same today.

We have to deal with a crisis of a negative GDP growth for certain in FY21, both nominal and real.

There are some things we can do.

We can prepare for the consequences of negative GDP growth, so as to minimize the negative impact of that in subsequent years and we have to do what we can to make that negative growth as little negative as possible.

And we have to make sure that the suffering from that does not fall upon the weakest and most vulnerable sections of society.

The prime minister has called for 'Aatmanirbhar Bharat', and the recent tensions have led to calls to boycott Chinese goods. Can we actually do that?

We are not buying Chinese goods today out of any love for China.

Why are even our sewing needles manufactured in China?

We are not able to manufacture even low-end products as cheaply as China.

And therefore it is a rational economic decision to buy something from somewhere when it is sold as cheaply as possible.

If you choose not to do that, then your economy becomes more expensive and then your growth falls, and you lose.

You have two options. Either you accept that you are going to become a more expensive country, or you put in place a plan to produce the things you take from China, more cheaply in India.

India has been in a situation where we can produce high-end products for our consumers, but when it comes to mass market items, we are uncompetitive, compared to other countries, not just China.

We have to grow up and do much more than just, in a fit of childish pique, say that we are boycotting Chinese products.

We will have to put the hard work in to make things here that people of India want to consume and reduce our dependence on the rest of the world.

We have to recognise that you cannot compete with China when so much of your GDP comes from low-end services.

You were a member of the Fiscal Responsibility and Budget Management committee. Given the resource crunch we are facing now, how should the government approach the FRBM Act?
And secondly, do you think there is a case for monetizing the deficit by the RBI?

The FRBM Act we should put to one side for now.

With this crisis, the big question of public finance is that can public resources be used more effectively and efficiently to achieve better outcomes than they have been used for the past 40 years.

How you monetise or finance the deficit is not the problem.

The problem is what do you do with the money that you borrow.

If you can show that you can utilize it better than what you did last year, the greater becomes the case for unconventional methods, like monetising.

I would like to stay in India and am in conversation with people, largely in the private sector.

I also have concrete offers from overseas, which I am contemplating.

But I have asked for some time, because obviously my decision will be based on how best I can serve not just myself, but my talents as a professional economist, and my country.