News
Business
Movies
Sports
Cricket
Get Ahead
Money Tips
Shopping
Sign in  |  Create a Rediffmail account
Rediff.com  » News » 'Xi is worried about what India will do'

'He is psychologically preparing the PLA and the Chinese public to avoid a loss of face.' 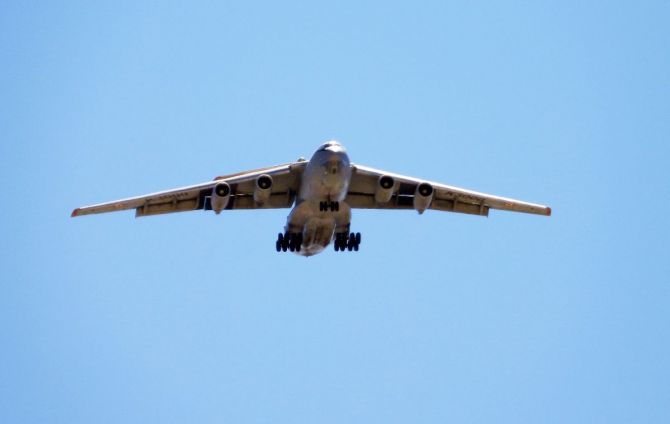 "They were totally surprised by Indian counter actions. Their plan now would be to freeze the situation along the LAC and reopen it again in future, when they feel the time is suiting them," says Major General M Vinaya Chandran (retd) a former commander on the Line of Actual Control.

The officer served the Indian Army for over three decades and retired as senior instructor at the prestigious National Defence College.

In an interview to Rediff.com's Archana Masih, General Chandran discusses the five-month standoff and what to expect from the Chinese next.

With the 8th round of military talks on the anvil -- what according to you have been the gains from the military and diplomatic engagements? What can we expect from future rounds of these talks?

The situation along the LAC is tense at the ground level. Troops have been tasked to defend territory and will physically evict any hostile transgression into their areas of responsibility.

There are chances of a random, over exuberant junior leader, transgressing to improve his own defensive position, leading to a skirmish. Such incidents could spiral out of control and lead to local conflicts.

The main aim of the commanders's level talk is to reassure each other that such events are inadvertent and prevent it from flaring up.

That could be the only gain coming out of the whole process.

The commanders also ask each other to disengage and move back to positions held before April. The lack of mutual trust precludes any disengagement by either side.

Talks are likely to continue till winter sets in and both sides are well entrenched.

The meetings are also a means to gain time for settling down in defensive positions. It can be seen from the statements published after every meeting that both sides have not made any change to the respective stance on the issue.

The only change is the reference to the reason to hold talks.

Initially it used to be on the basis of the Wuhan and Mamallapuram spirit and then it changed to the foreign minister's talk in Moscow.

The meetings are still continuing because China has not achieved what it wanted and is worried about India calling their bluff.

Otherwise China would have stopped communicating at the military level. The diplomatic level talks are a ploy by the Chinese Communist party to show that they are still controlling the PLA, as can be seen from the similarity of the Chinese script for all levels of talks.

The final outcome of the meetings will be cosmetic and there will not be any discernible change to the line being held by both sides.

Since disengagement has not been achieved before winter, what will be the Indian Army's challenges in the coming tough months?

The challenges faced by the Indian armed forces are to procure clothing and equipment in adequate numbers for the additional troops deployed in Ladakh and continue their logistics support, through winters.

We have the ability to surmount these challenges and maintain our operational efficiency and the Indian government has taken necessary steps towards that end. The military is well trained to carry out the given task successfully.

The vexing issue is the need to divert funds from other areas, which are equally important for national development.

The challenge is more economic than military.

What do you think is the reason behind the continued Chinese intransigence? What do the Chinese expect to achieve through this standoff?

China wanted to teach India a lesson for the setback in Doklam and divert domestic attention from the shaking popularity of the CCP and Xi Jinping.

They did not succeed, as they underestimated Indian reaction capability. Now that India has forced a stalemate, disengagement at this stage will be a loss of face for Xi.

Through continuing talks and other means, CCP is trying for a way out without loss of face. The party and the Chinese media are trying their best to fashion a theoretical victory of sorts, an art at which they are masters.

In any case there will not be any reduction of troops on the frontline. Cosmetic changes could be made by reducing a few numbers of troops from rear areas.

In the meanwhile, if the Chinese economy improves, the CCP can claim victory of their system and shift domestic attention away from the LAC with India.

Since China has resurrected the 1959 claim line -- is it likely to push into other areas where there is a difference on the perception of LAC? Or will PLA be less adventurous after India has secured an advantageous position in South Pangong Tso.

It should be understood very clearly that they have not resurrected the 1959 Claim Line. They brought it up along with many other issues to justify their intransigence and it has not been accepted by India.

The media on both sides took it up as something important. The debate in India is focusing only on the Northern part of that line in Ladakh, whereas China is tacitly focusing on the Eastern portion in Arunachal Pradesh.

They have just planted a seed, which they can reap sometime in future, when we negotiate the boundary in the East.

It is just a line which was attached to a letter written by Zhou Enlai, the original of which is not even existing. What is available now is a purported copy published by the People's Daily in 1963.

The CCP themselves have changed the claim line many times since 1959, thus reducing its worth as a document for negotiation.

Irrespective of any claim line, PLA will constantly strive to move ahead and occupy areas along the boundary with all their neighbours, where they don't find any resistance. Lines will be modified as they make gains. Do you feel the Chinese did not expect such a firm Indian response to their expansionist manoeuvre? Do you feel they had thought that India would back off?

The CCP, while planning the intransigence, were quite sure that India was not in a position to counter them, assuming that due to effect of Covid and a lacklustre economy, the Indian government will not support, a strong push back by the Indian armed forces.

They were totally surprised by Indian counter actions. Their plan now would be to freeze the situation along the LAC and reopen it again in future, when they feel the time is suiting them.

A sequence can be discerned from their intransigence in Depsang/Chumar, Doklam and Galwan, oscillating between East and West.

We may expect the next one in the East.

Xi Jinping asked his troops to prepare for war during an inspection -- seeing the development in the last 5 months, what do you feel is Xi Jinping's end game?

The PLA belongs to the CCP and Xi Jinping is its core and commander-in-chief of the PLA. During inspections for the last many years, he has been extolling them to be prepared for war.

Scripts for his speeches to various audiences, are well crafted and orchestrated to enhance his public stature. It has no relation to the military operations on ground.

In the current situation Xi is worried about what India will do and he is psychologically preparing the PLA and the Chinese public, to avoid a loss of face.

The army commanders's conference will deliberate on the situation on the LAC -- how important is this discussion going to be and what are its implications?

The army commanders's conference is a biannual event, where all important issues regarding national security, where the Indian Army can be called upon, are discussed.

The LAC imbroglio being discussed during the current conference does not have any special significance. Plans to counter the Chinese intransigence would already have been jointly made by the Indian armed forces and the government and put into action, as it cannot wait for a biannual conference of one arm of the armed forces.

Army commanders will be updated on the issue and their views sought.