'Pakistan has robust incentive to turn heat on LoC.'

"Pakistan derives some strategic benefits from India getting bogged down on its northern border."

"One of Islamabad's main foreign policy goals is to deter New Delhi. And given the serious crisis that India is embroiled in with its much larger rival, it's certainly getting deterred," Dr Michael Kugelman, Deputy Director of the Asia Program and Senior Associate for South Asia at the Wilson Center, tells Rediff.com's Archana Masih in the concluding segment of a two-part interview.

Has China's view of India changed in the Modi years? How has India's diplomatic handling of China been different from previous governments?

China's view of India has generally remained constant: India is an inferior power, but should be treated carefully and when possible cordially.

This helps explain why China over the last few years has continued to pursue economic cooperation with India, and why it has sought to promote a relatively cordial diplomatic relationship with New Delhi.

There is one milestone event that has shifted Chinese thinking about India in the Modi years -- and that is the Doklam crisis.

India's refusal to back down in the face of Chinese provocations made Beijing realise that India is willing to stand up to its powerful neighbour.

But instead of prompting China to back off, the Doklam standoff arguably compelled China to dig in deeper and provoke India more aggressively -- as we've seen in Ladakh in recent weeks.

The Modi government's diplomatic handling of China has generally been consistent with past practice, and similar to Beijing's own strategy: Pursue workable diplomatic ties, and maintain an important economic partnership.

What stands out about Modi's track record with China is his willingness to invest his own personal diplomacy in efforts to strengthen the relationship. And fortunately he had an able and willing partner in Xi.

The two informal summits Modi held with Xi are notable in this regard -- though in reality these activities may be more a function of the growing global popularity of summitry as a form of diplomacy than a novel Modi tactic.

At the same time, with the India-China relationship having grown fraught during the last few years, the space for diplomatic cooperation has receded. The Belt and Road Initiative is a powerful accelerant of India-China rivalry, and it has really taken off in the Modi years.

A strongly worded statement issued by the Indian external affairs ministry about the BRI back in 2017 did not mince words about a global super project that India rejects because of its intention to expand into disputed territory that New Delhi claims as its own.

One big question that emerges from the bloody events of June 15 is how India's diplomatic handling of China will change in the long term, including post-Modi.

The India-China relationship has entered into a more tense and confrontational phase, and that is likely to remain the new normal for quite some time.

How Modi, and future Indian leaders, navigate that new reality as they pursue diplomatic relations with Beijing will be something that India foreign policy specialists will be mulling over well into the future.

Will India now have to deal with a volatile LoC and deteriorating situation on the LAC -- a two-front confrontation?

Yes. Pakistan has a robust incentive to turn up the heat on the LoC with stepped-up cross-border firing so long as India is bogged down on the LAC.

The LoC had already been hot before the latest LAC spat. And let's be clear: It's no small matter that a nuclear-armed triad has grown increasingly volatile.

What does this mean for Pakistan, China's all-weather friend? What impact is this going to have on the LoC?

Pakistan derives some strategic benefits from India getting bogged down on its northern border.

One of Islamabad's main foreign policy goals is to deter New Delhi. And given the serious crisis that India is embroiled in with its much larger rival, it's certainly getting deterred.

Of particular significance for Islamabad is that the Ladakh crisis has obliged New Delhi to redeploy some troops from Jammu and Kashmir to Ladakh.

New Delhi will certainly worry that the Ladakh crisis could tempt Pakistan to take advantage of India's LAC distraction and infiltrate militants across the LoC to stir up trouble in Kashmir.

I would not overstate this possibility. Pakistan is under a lot of pressure from the FATF (the global terror financing watchdog) to rein in the terror networks on its soil, and it risks being sanctioned if it doesn't comply.

That would be the worst possible outcome for a country that is not only keen on repairing its global image, but is also undergoing a serious economic crisis -- worsened by the pandemic -- and can't afford to be saddled with new economic burdens.

Furthermore, Pakistan doesn't infiltrate its assets into Kashmir with the intensity that it did back in the 1990s.

And Kashmiri militants don't really need Pakistan's support so long as they are galvanised and radicalised by the oppressive conditions they face in the Kashmir Valley.

Still, the possibility of Pakistan using the Ladakh crisis as an opportunity to spirit militants over the LoC is real -- and especially if the Ladakh crisis continues for another few months, and if Pakistan, as expected, is not blacklisted when FATF has its next plenary later this year.

And even if this scenario doesn't come to pass, Islamabad derives some benefits from knowing that New Delhi will worry about it.

One final point about Pakistan is in order. Given China's deep footprint in that country, there's certainly a possibility that India could covertly engage in retaliatory actions against Beijing there -- such as by sponsoring attacks on China-Pakistan Economic Corridor targets, or on other Chinese interests in Pakistan. Is China's action in Ladakh linked to Beijing's uneasiness at New Delhi's proximity to Washington in the Trump era?

I'm sure it is, at least in part. And this is just as much, if not more, an issue of the US-China relationship as it is the US-India relationship.

The US-China relationship is radioactive right now, and Beijing has a strong interest in trying to undermine Washington however it can.

What better way to do so than to provoke New Delhi, a key and growing US partner?

Beijing also knows that Washington views New Delhi as a strategic partner in the US effort to push back against China through the Trump administration's Indo Pacific strategy.

In this regard, with its provocations in Ladakh, China may be trying to push back not only against India and by extension the US, but also against the US Indo-Pacific strategy itself.

This isn't to suggest that China wouldn't be provoking India if the US-China relationship were flourishing. There are plenty of other motivations guiding Beijing's actions along the LAC.

Still, the US-India-China triangle -- which pits the US and India against China -- gives Beijing a strong, added incentive to engage in its provocations in Ladakh. And yet, seen from this lens, it's a backfiring tactic for China.

Beijing may be using its muscular moves on the LAC to push back against deepening US-India friendship, but in the end those moves will only add more strength to that friendship. 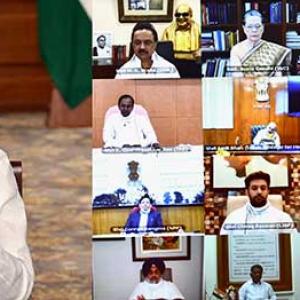