'We should have seen these signals and reacted earlier.'
'We miss out on a certain strategic advantage by arriving late on the scene.'
Air Marshal P K Barbora and Air Commodore Nitin Sathe (retd) discuss the IAF's readiness to operate against the PLA. Air Chief Marshal Rakesh Kumar Bhaduria, paid a 'quiet' visit to the all important airfields of Leh and Srinagar on Friday.

The chief of the air staff was brought up to speed on the situation in the region and also briefed on the readiness of the IAF assets recently deployed there in response to the incident in the Galwan valley on the night of June 15/16 at the Line of Actual Control.

I thought I must de-mystify the event and asked Air Marshal Pranab Kumar Barbora, who once headed the Western Air Command and retired as vice chief of the air staff, what he thought of the deployment of fighter aircraft in forward airfields and the indicators thereof from a military perspective.

"This is nothing new that has happened. Such kind of plans were conceptualised and practised right from the time I was the C in C of the Western Air Command," the air marshal points out. "I had moved the big birds (the Su-30s) to Leh to see if they would have problems in operating there," the air marshal adds. "When I went there, I was so happy to see that the boys were happy with the operating environment and were raring to go."

"My brief to them was simple: Fly around the area by day and night, get used to the mountains around you, but keep within the rules and limitations of operating near the borders," Air Marshal Barbora recalls.

"You see, noise and news travel quickly to the other side in the hills. The idea was to make the other side know that we were operational from the altitude with the new aeroplanes," he remembers.

"It was a tremendous morale booster for our forces."

"Today we have deployed there with the same intent, I suppose. We have been augmented by newer aeroplanes now. The Chinooks will provide for heavy lift capability from inaccessible areas whilst the Apaches would give us more cutting teeth at that altitude and show our offensive intent should the situation demand," the air marshal explains about the new helicopters in the IAF inventory.

"It is not as if we cannot operate from the lower airfields in the south or central sectors. We have tremendous long range capability today due to the availability of air to air refuelling and also the ability to swing forces from one sector to another in short timeframes," Air Marshal Barbora points out. IMAGE: The Chinook is used for transporting troops, artillery, equipment and fuel. The helicopter can carry out military operations not only during the day, but also at night. Photograph: ANI Photo

By moving aircraft to Leh, we are not signalling that we are ready for war, are we?

Here are the advantages and disadvantages of deployment of fighter aircraft to forward airfields, especially in times of heightened tensions like today in my assessment:

A. Closer distance to the area of action reduces reaction times. It also gives away intent and also increases vulnerability of our own machines to attack from the other side.

B. Like Air Marshal Barbora explained, the mission can be undertaken from other bases from deeper inside our territory. It should be borne in mind that the higher the airfield, the lesser the load carrying capacity of the aircraft.
This holds true for the many airfields across the Chinese border too.
The Chinese aeroplanes getting airborne would require air to air refuelling, an asset which is in short supply with the Chinese.
The People's Liberation Army Air Force has similar aircraft operating opposite our sector, but for the Chinese, the distance their aircraft have to travel is much greater, thus having an effect on their loiter time and load carrying capacity even if they refuel in air.

C. Intelligence is the key to targeting.
Intelligence needs to be updated all the time, especially during peace.
By operating fighters from forward bases, we are able to gather a fair amount of intelligence on the deployment and tactics of the adversary.
Also, we use all means possible -- satellites, photography/electronic intelligence gathering from aircraft and UAVs -- to make sure that we build up an adequate databank of enemy dispositions and are ready to take them on should the time come.

D. The scale of deployment is often used by major powers as an opportunity to offer to mediate/negotiate to avoid escalation.
It indicates that this is a signalling exercise and part of the overall Information Warfare matrix.
Misinformation about deployment in one region is also an effective tool to draw the the enemy's attention to one area while we build up strongly in another strategic location.

E. On a more practical side, our aircrews need to be trained to be acclimatised at these altitudes.
They need to get used to the new environment/operational area where they may have to operate.
It gives adequate practice to the receiving base to get their operating SOPs checked out and glitches removed.
The airfield administation and technical infrastructure also gets fine tuned during the course of such exercises.

"Should we not have employed these machines earlier?" asks Air Marshal Barbora. "I really wonder why the delay. They (the PLA) had a massive exercise going on on the Tibetan plateau. Movement from there to augment their forces in this area would be easy."

"We should have seen these signals and reacted earlier," the air marshal says. "We miss out on a certain strategic advantage by arriving late on the scene."

"You cannot trust the Chinese, just cannot," Air Marshal Barbora emphasises. "They think 50 years ahead because they have the wherewithal. We can't even think 5 years ahead as of now and therefore it stunts our ability to think long term."

Air Commodore Nitin Sathe retired from the Indian Air Force in February 2020 after 35 distinguished years of service in the IAF.
A helicopter pilot, he served as the station commander at the IAF's Jammu station between 2010 and 2012. 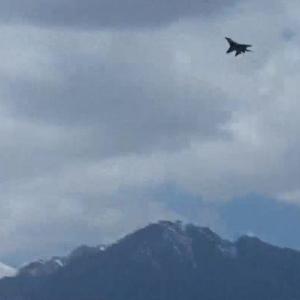 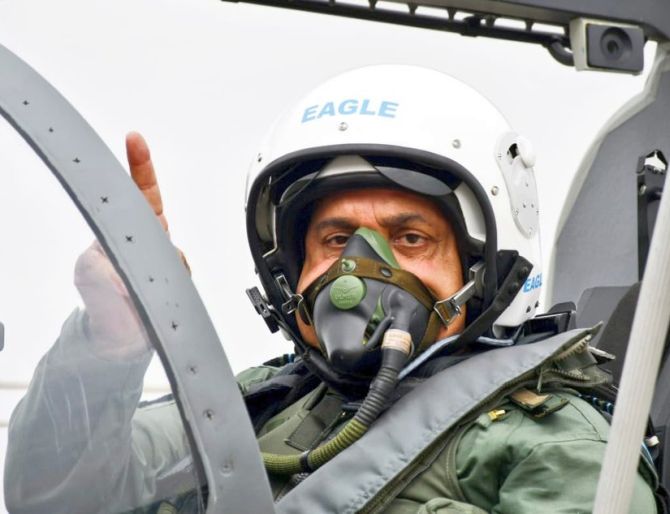 Ready to respond to any contingency at LAC: IAF chief