'How and if India retaliates will go a long way toward determining the trajectory of this crisis.' 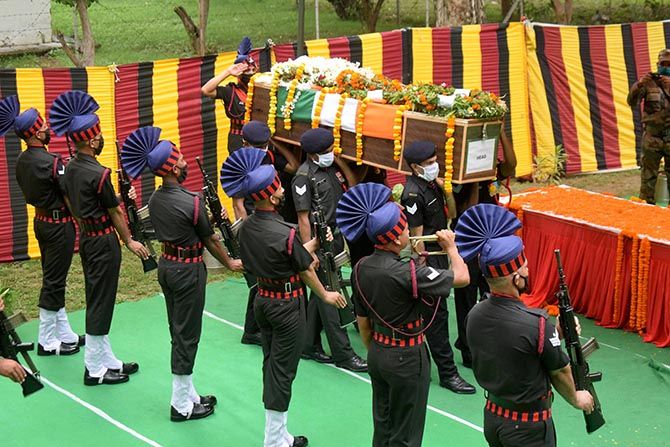 IMAGE: Indian Army soldiers pay tribute to Naik Deepak Kumar, who was among 20 soldiers murdered by Chinese troops, at a ceremony at the Military Hospital in Prayagraj, June 19, 2020. Photograph: PTI Photo

"The events of June 15 have completely reshaped the dynamics of the border dispute, and potentially in destabilising ways," says Dr Michael Kugelman, Deputy Director of the Asia Program and Senior Associate for South Asia at the Wilson Center, a well respected think-tank in Washington DC.

"The risk of escalation in the future has increased exponentially," Dr Kugelman tells Rediff.com's Archana Masih in the first part of the interview:

What are the possibilities of de-escalation now after such a bloody encounter, the worst in decades?
Will it make it even harder to achieve the status quo ante?

The good news is that both sides have stated their continued commitment to dialogue, and talks have taken place since the deadly clash. That's an important sign.

The military dialogue process that began on June 6 is the prime off ramp at this point.

If both sides are willing to return to it in good faith, prospects for escalation are dampened.

That said, let's be clear. A mass-fatality clash is inherently escalatory.

Even if the two sides are talking, it beggars belief to think that they'll be willing to climb all the way down the ladder anytime soon.

India, especially given current public sentiment, will be under tremendous pressure to respond in some way.

It has limited military options, but it does have non-military moves that it could pull out of its toolkit -- boycotting Chinese goods, ending partnerships with Chinese firms, and so on.

How and if India retaliates will go a long way toward determining the trajectory of this crisis.

Additionally, successful talks will be all the more difficult now that tensions are at a fever pitch.

Each side will take a harder line and be less willing to compromise.

Each side's core demands -- India's demand that PLA troops leave the areas they have occupied, and China's demand that India stop its infrastructure projects -- will face ample resistance.

The operative question is: At a moment of high tension, with two rivals facing their biggest crisis in decades, will they be in any mood to make compromises at the negotiating table?

For there to be de-escalation, someone will need to make concessions.

It was said for decades that the LAC had remained peaceful, unlike the LoC with Pakistan, how have the events of June 15 changed all that?
How will this change the nature of the LAC and India's management of the border with China?

The events of June 15 have completely reshaped the dynamics of the border dispute, and potentially in destabilising ways.

The deadly violence that day has sent mistrust soaring.

This means that in the future, the pushing and shoving that has typically characterised disputes could easily escalate to nastier and deadlier forms of fighting. And this means the risk of escalation in the future has increased exponentially.

There is also reason to believe that the past agreements between the two sides that have forbid the use of heavy weaponry during clashes may fall apart.

Both sides will want to better protect themselves in future disputes along the border, and firearms provide more protection than fists.

For many years, the absence of heavy weaponry during LAC disputes has ensured that the border isn't nearly as volatile as the LoC.

If troops along the LAC start using guns in future disputes, then the entire dynamic changes and the potential for escalation -- and possible miscalculation -- will increase markedly. 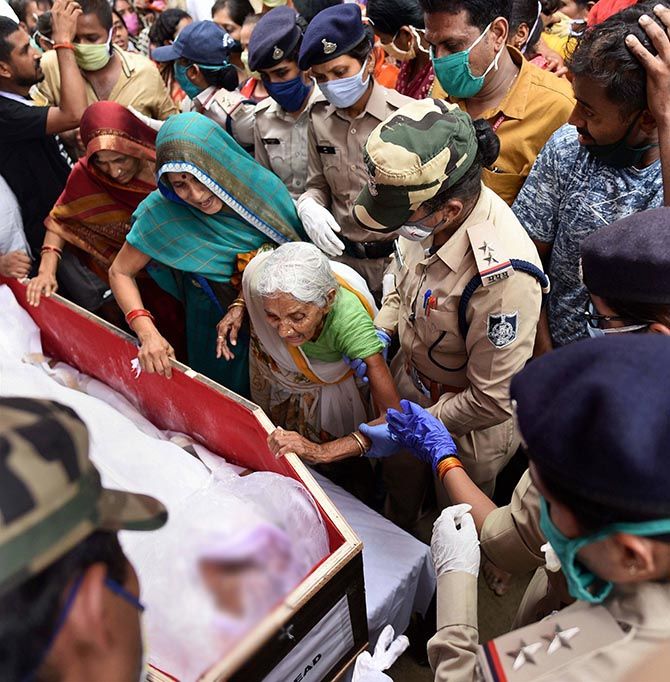 IMAGE: Family members of martyr Naib Dipak Singh mourn during his funeral at his village in Madhya Pradesh, June 19, 2020. Naik Singh was among the twenty Indian Army soldiers murdered by the Chinese in Ladakh's Galwan valley. Photograph: PTI Photo

Has this annulled the gains of Wuhan and Mamallapuram summits -- where one of the key outcomes was to avoid stand-offs on the LAC
What does it mean for the future of India-China relations which have always been complex and complicated even in the best of times?

The events of June 15 not only drastically changed the dynamics of the border dispute, they also dealt the biggest blow to the broader India-China relationship in decades.

One of the big impacts on India-China ties will be an inability to fool-proof the diplomatic and economic aspects of the relationship from the volatilities and tensions that emanate from the security side.

Previously, India and China had enough goodwill and depth in their relationship that they could overlook the border dispute enough to focus on cooperation in other areas.

But much of that goodwill has been shattered, and India in particular will be under pressure to scale back its commercial cooperation with Beijing.

There is an uncomfortable -- and, given the raw emotions of the moment, unpopular -- question that must be asked.

Can India, mired in one of its worst economic slowdowns in years -- and one that will only worsen because of COVID-19 -- afford to reduce or cut commercial ties with a key economic partner?

National security imperatives and political pressure will likely trump economic considerations, but there is nonetheless a real and considerable economic risk if India goes in that direction.

Let's be clear: The 'Wuhan Spirit' is dead in the water.

Optimists will argue that Beijing and New Delhi need to conjure up that spirit one more time -- perhaps with another informal summit between President Xi and Prime Minister Modi -- to get the relationship back on track.

Pessimists will argue that recent events make painfully clear that past Xi/Modi efforts to use personal diplomacy to strengthen the bilateral relationship have failed miserably, and that it's no longer a viable strategy.

The pessimists' views will likely carry the day for quite some time.

To be sure, once the dust settles and emotions are less raw, there may be a more conducive environment for trying to build back some of the lost goodwill.

But that will take a while.

And at any rate, once you have another bloody border clash, all bets will be off and any new progress toward strengthening ties will go up in smoke.

We see repeated incidents like Depsang in 2013, Doklam in 2017 and Ladakh 2020. Is this the new normal for India-China relations where military transgressions will reoccur with greater frequency?

Yes. In recent years, each successive incident has been increasingly serious.

Let's not forget that the Doklam crisis involved a third country, Bhutan, and marked the first time Indian and Chinese troops engaged on the soil of a third country</>.

I don't see this escalatory pattern -- one marked by increasingly serious and complex standoffs -- changing in the aftermath of the Galwan Valley clash. In fact, I see this pattern becoming more entrenched.

The India-China relationship is tenser now than it's been in decades, and the core drivers of these spats -- above all a border that remains hotly disputed -- won't go away even after the current crisis ends.

Additionally, China appears to have no immediate desire to scale back the muscular actions it's been carrying out not just in Ladakh, but also in the South China Sea.

Beijing is increasingly on the defensive because of the global pushback against it for its initial handling of the coronavirus pandemic.

With Beijing increasingly on the defensive on the global stage, it has a strong incentive to go on the offensive through provocations in Ladakh and elsewhere to telegraph its continued strength. 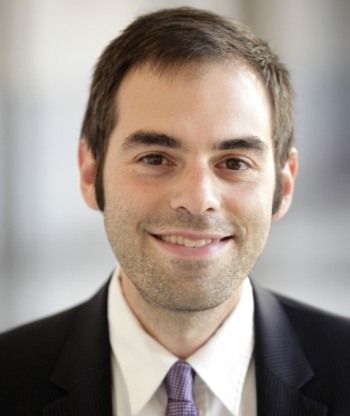 What do you think was the reason behind the Chinese aggression on the LAC?
What is the Chinese intention?
What do the Chinese hope to gain by keeping the border in ferment?

We may never know the full story. Broadly speaking, we can chalk China's actions on the LAC in recent weeks up to a combination of factors, both local and geopolitical: Indian infrastructure building that better allows it to project power and protect territory in Ladakh; India's decision to revoke Article 370 of its Constitution; a growing US-India relationship and a deteriorating US-China relationship; and a need to showcase strength and resolve at a moment when China's policies and image are taking some serious blows in the court of global public opinion.

What remains unclear is if China's provocations are merely meant to telegraph messages of strength and defiance, or if they are part of a broader global strategy to embrace revisionist steps that include attempting to change borders via the use of force. 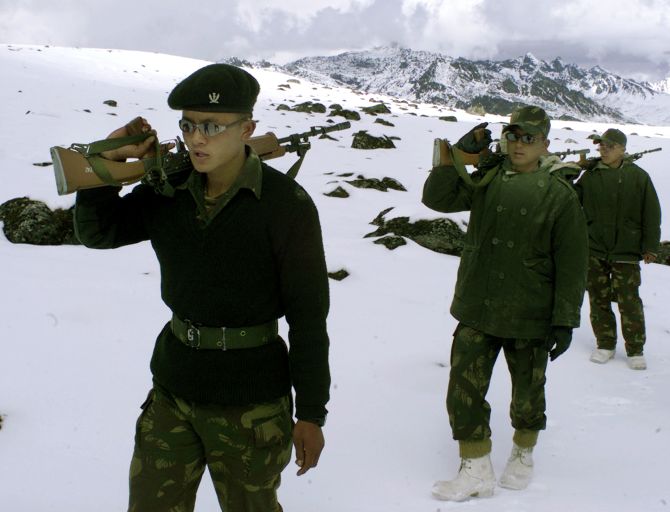