Had India agreed to join the trade pact, Indian markets would have been flooded with cheap Chinese products, notes Rajaram Panda. 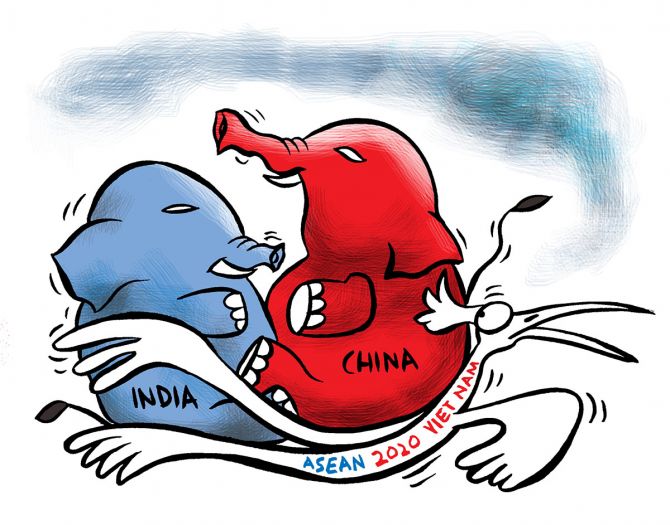 The 37th ASEAN Summit and related meetings held from November 12 to 15 hosted by Vietnam was by far the most important activity of ASEAN in 2020 and another milestone in Vietnam's global profile during its chairmanship, held on rotational basis, this year.

The summit offered an opportunity for the grouping to review intra-bloc cooperation throughout the year as well as its cooperation with partners, while charting priorities for the future.

It was also an opportunity for ASEAN leaders to meet with many leaders of major ASEAN partners.

It was more significant that the summit took place amid COVID-19 and the complex developments in the global and regional strategic environment and traditional and non-traditional security issues.

For the ASEAN countries, maintaining its centrality is at the core of the institutional architecture. Despite that, there are differences at times.

For example, Cambodia and Laos are seen to parrot China's views on regional issues.

Sometimes, the Philippines also does the same.

This poses a challenge for the rest of the members in the grouping to resolve the internal differences, if any, so that the organisation's centrality is not affected.

Secondly, as regards to ASEAN's dialogue partners, there are no issues, either bilateral or regional, where they differ, though China remains the elephant in the room.

That remains a worry.

Thirdly, as regards India, relations with all the members are satisfactory.

The ties go back a millennnia and the historical bonding binds the region with India till today. 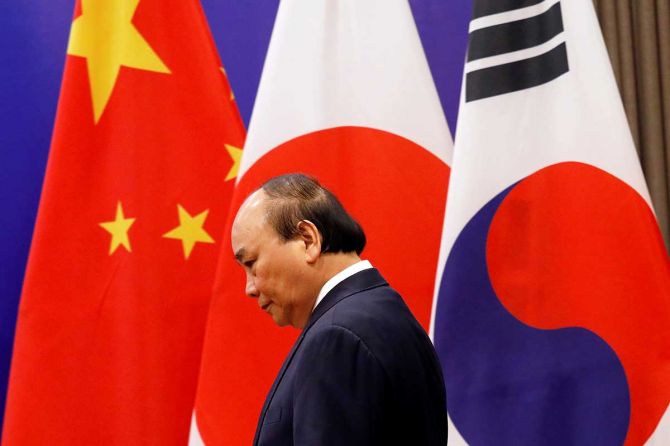 Thanks to Vietnam's leadership, the summit was an affirmation to the commitments of the members and strong political resolve to maintain cooperation momentum and regional connectivity to cope with the pandemic and consolidate ASEAN's centrality and position, along with the bloc's development orientations in a rapidly, complexly and unforeseeably changing world.

This included the 37th ASEAN Summit, ASEAN+1 with China, Japan, the Republic of Korea, the US, the UN and Australia, the 15th East Asia Summit, and the 4th Regional Comprehensive Economic Partnership (RCEP) among others.

During the summit, the main focus was on building the ASEAN Community, maintaining intra-bloc cooperation momentum, expanding and deepening relations between ASEAN and partners, promoting the grouping's centrality, raising its international position, ensuring Covid-19 prevention and control, and discussing regional and international issues of shared concern. 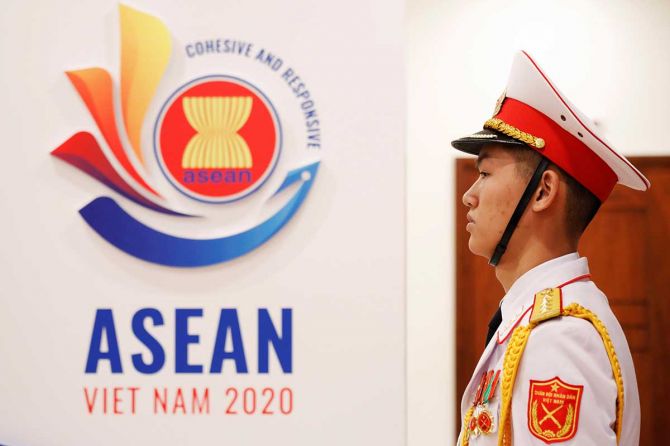 The opening ceremony of the 37th ASEAN Summit commenced on November 12 in Hanoi, with Vietnam President Nguyen Phu Trong in attendance.

Vietnam symbolically passed on the baton of the ASEAN Chair to Brunei at the closing ceremony on November 15.

Among major highlights included mid-term review of the Master Plan on ASEAN Community 2025 and the announcement of ASEAN comprehensive recovery framework.

The establishment of a regional medical supplies reserve in response to medical emergencies was also unveiled.

In his address to leaders from the 10 ASEAN countries, Modi highlighted India's response and broader support to the international community and welcomed the association's initiative to fight the pandemic.

The prime minister also underscored the importance of greater physical and digital connectivity between ASEAN and India and reiterated India's offer of $1 billion Line of Credit to support ASEAN connectivity.

On trade and investment, Modi stressed the importance of diversification and resilience of supply chains for post-Covid economic recovery.

Like in the earlier Shangri-La address two years ago, the prime minister underscored that a cohesive, responsive and prosperous ASEAN is central to India's Indo-Pacific Vision and contributes to Security And Growth for All in the Region (SAGAR) and that India's Indo-Pacific Oceans Initiative and the ASEAN Outlook on Indo-Pacific aspires to ensure a free, open, inclusive and rules-based Indo-Pacific region.

The leaders affirmed the importance of maintaining and promoting peace, stability, safety and security in the South China Sea, and ensuring freedom of navigation and over-flight and of adherence to international law, especially the 1982 UN Convention on the Law of the Sea (UNCLOS), which provided the 'legal framework' for carrying out trade, commerce and other activities in the South China Sea. Singapore's Prime Minister Lee Hsien Loong also announced his country's contribution of $100,000 to the COVID-19 ASEAN Response Fund as the region continues to work together to combat the pandemic.

Vietnam's timely handling the spread of the virus was a model for others to emulate.

In particular, Vietnam's able stewardship and important role in helping other member nations in combating the pandemic received high praise.

The ASEAN nations resolved to grapple with new waves of infection and the economic impact of the pandemic and therefore helped each other to repatriate citizens stranded overseas.

Affirming Singapore's belief in 'vaccine multilateralism' and support for global vaccine initiatives, Lee noted that many ASEAN member states and partners were members of such facilities.

Japan and South Korea also committed $1 million each to an ASEAN Covid-19 fund, meant to support member states in securing medical equipment and finance research on drugs and vaccines against the coronavirus.

One issue that disappointed the member states is India's refusal to sign the Regional Comprehensive Economic Partnership (RCEP), the mega trade pact that includes the 10-member ASEAN bloc, along with China, Japan, South Korea, Australia and New Zealand.

Until last year, India was open to join the trade pact, but then pulled out in November 2019 as it still does not address India's outstanding issue and concerns.

The sticking point was the issue of mounting trade imbalance without any checking mechanism.

From the ASEAN perspective, it is a collective commitment to economic integration and an inclusive, open and rules-based multilateral trading system.

Though the 15 nations concluded the negotiations and signed the RCEP agreement on 15 November, membership to the group would not be open for a while, with the exception of India which could join at its will.

The RCEP agreement would make this grouping the largest free-trade agreement in the world, covering nearly half of the world's population accounting for nearly 40 per cent of the global commerce and contributing one-third of the world's gross domestic product.

The agreement was in negotiation since 2012 and was aimed to enhance regional economic integration, promote the flow of investments and strengthen global supply chains. 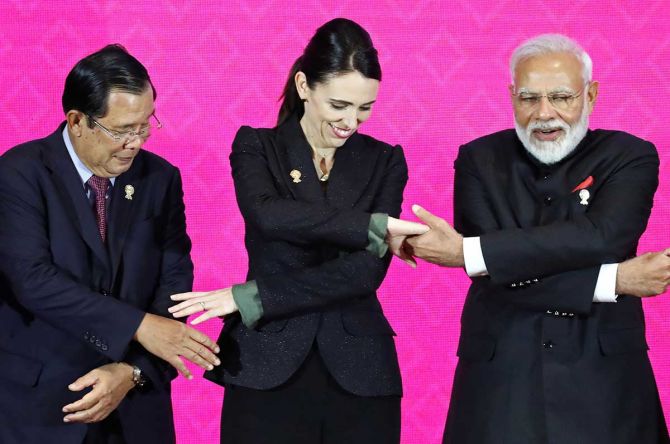 China forcefully pushed for inking the deal during the RCEP summit, which was seen as an attempt to counter-balance the impact of its lingering trade war with the US as well as to project the region's economic might to the West.

India feared the agreement would become a free trade deal with China through the back door, even through other countries.

China remains the elephant in the room. Had India agreed to join the trade pact, Indian markets would have been flooded with cheap Chinese products, further aggravating the trade imbalance.

This is the major reason why India stood its ground against signing up for the agreement and also currently reviewing a number of Free Trade Agreements in the region.

The EAS is an important confidence-building mechanism in the region and needs to be strengthened further.

India is a founding member of the EAS.

The 18 members of the EAS together represent 54% of the world population and account for 58% of the global GDP.

In echoing the same sentiment expressed by Prime Minister Modi at the 17th ASEAN-India Summit, and in a clear reference to Beijing's aggressive actions Dr Jaishankar expressed 'concern about actions and incidents that erode trust in the region;'.

By raising the issue of territorial integrity and sovereignty, he emphasised the importance of adhering to international law, and promoting a rules-based global order.

Jaishankar had also spoken about respecting territorial integrity and sovereignty at the Indo-US 2+2 meeting in New Delhi in October.

This time, he stated that the Code of Conduct negotiations should not be prejudicial to legitimate interests of third parties and should be fully consistent with UNCLOS.

US President Donald J Trump skipped the virtual summit with his ASEAN counterparts for the third time in a row even as China was expanding its influence with a massive free trade deal in the region.

The US was represented by National Security Adviser Robert O'Brien who also represented the US at the virtual East Asia Summit that included the ASEAN members as well as Australia, China, India, Japan, South Korea, New Zealand and Russia.

Trump's absence could be seen as America's declining interest in Asian affairs.

China shall now feel emboldened to intensify its land-grabbing activities in many neighbouring countries.

Notwithstanding the mega trade pact, a collective action by democratic-minded nations in the Indo-Pacific region becomes more urgent to keep China in check.

Indeed, the EAS is a leading mechanism of the Indo-Pacific region engaged in exchanging views on regional strategic issues.

The summit adopted a Hanoi Declaration, the main highlights of which were reiterating the importance of cooperation in ensuring safe, effective and affordable access to COVID-19 vaccines, keeping the global supply chains open, besides discussing the issue of South China Sea, situation in the Korean Peninsula and Rakhine issue of Myanmar.

The EAS is a vital part of the regional security architecture committed to promote a free, open, inclusive, transparent, rules-based, peaceful and prosperous Indo-Pacific region.

India, being a founding member, upholds these principles and committed to defend those.

The architecture needs to be strengthened further.