Jai Bhagwan has been without a job for six years.
When we ask him how he managed to run his house without a job, he says matter of factly, 'I sold my wife's jewels.' 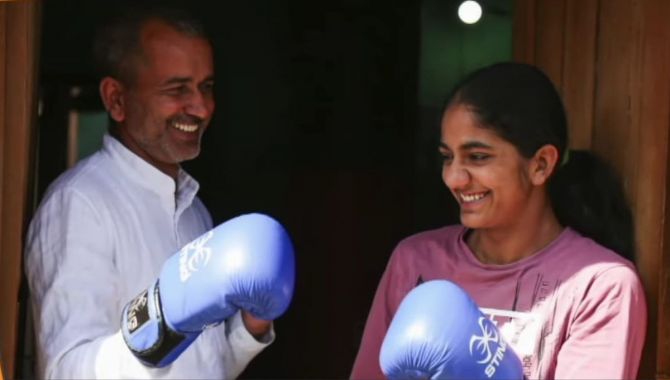 Nitu Ghanghas, 21, won her maiden gold medal at the Commonwealth Games in Birmingham. Nitu is a native of Dhanana village in Haryana's Bhiwani district.

Her father Jai Bhagwan worked as a messenger in the Haryana state assembly. He has been on leave without pay for the last six years. He took leave to further his daughter's dream to become a world class boxer.

When Nitu won her gold medal at Birmingham, she dedicated her triumph to her father and said it would not have been possible without his hard work and sacrifice. 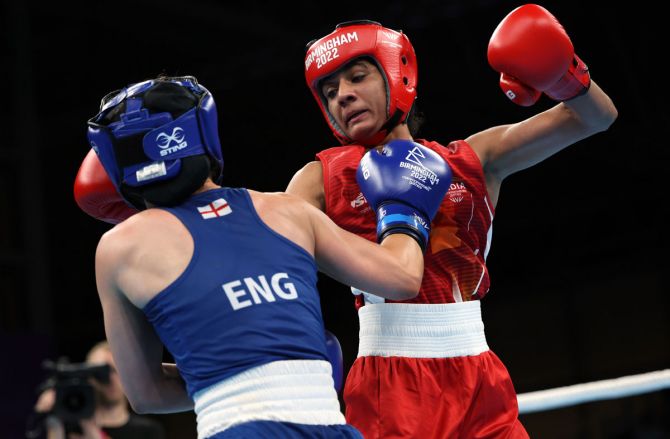 Nitu, a two time World Youth champion, was selected to box for India after multiple World champion Mary Kom was injured and could not participate in this CWG.

Jai Bhagwan, 50, has a BA degree and has worked as a bill messenger in the Haryana assembly since 1989.

He was not a good sportsman in school or in college. He has three children, two girls and a boy.

His younger daughter is studying for an MBBS degree. His son is a sportsman and participates in shooting. 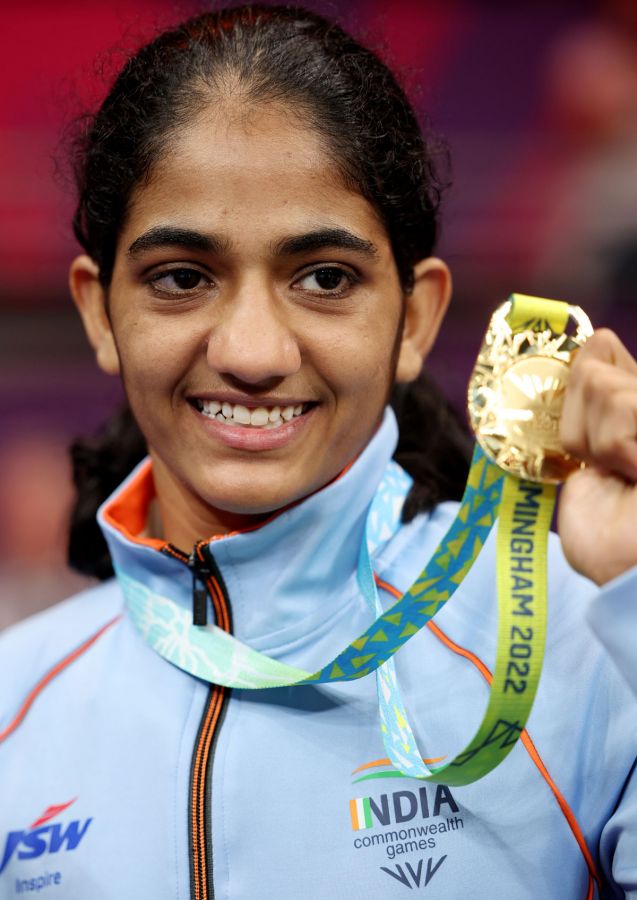 "Nitu was a good runner, I decided to make her a boxer and encouraged her to take it up," Jai Bhagwan tells Rediff.com's A Ganesh Nadar in a phone conversation from Dhanana village on Tuesday. "I have a friend Manoj whose daughter Sakshi was also interested in boxing. We sent both of them for training together. Nitu has been boxing since the age of 12."

Jagdish Singh has been her coach from childhood. His boxing academy is located 20 kilometres from Nitu's village and Jai Bhagwan has been taking her there every day on his bike for the last seven years to train.

Bhagwan says Nitu has a special diet filled with rich food like ghee and badam milk. Nitu exercises for three hours in the morning before she travels to the boxing academy.

Father and daughter go twice to the academy every day, in the morning and in the evening. 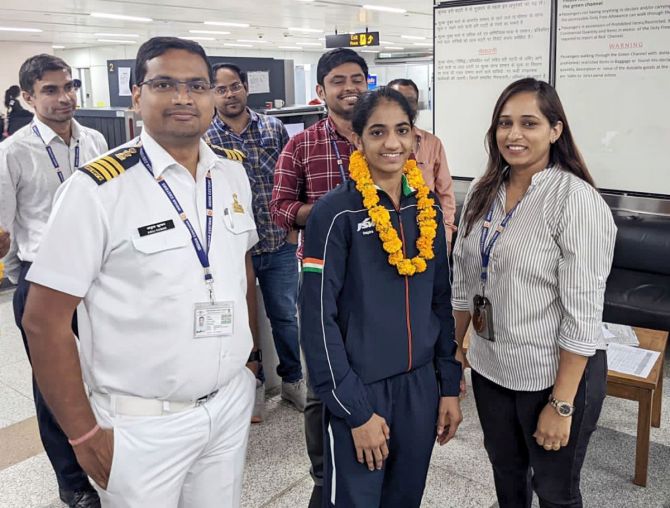 IMAGE: Nitu is welcomed on her arrival at the IGI airport in New Delhi, August 9, 2022. Photograph: ANI Photo

Bhagwan has been without a job for six years.

When we ask him how he managed to run his house without a job, he says matter of factly, "I sold my wife's jewels."

Nitu has been dubbed 'Gabbar Sherni' of the ring, but is known to be very shy and soft spoken.

Bhagwan laughs when we ask him about this name and says it has been created by the media.

Jai Bhagwan says he has personally seen to it that his daughter got all the proper training, diet and equipment she needed.

"Now that she has won a gold medal for the country, I hope the government will help us," he says, "I am hoping to build a house for my family." 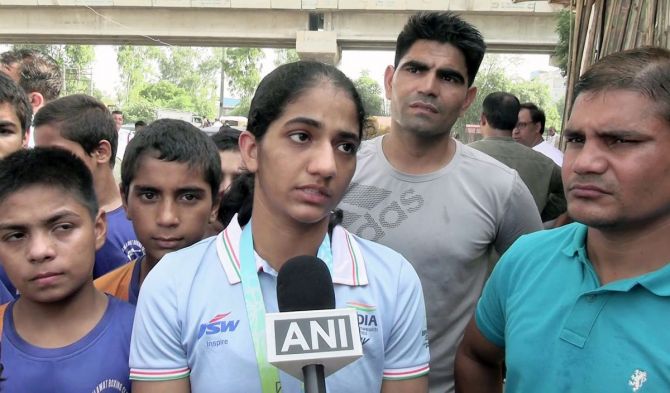 Hopefully along with all the accolades and rewards that come Nitu's way, the Haryana assembly will re-employ their bill messenger, whose daughter went all the way to Birmingham to win Gold for the country.

Ask Jai Bhagwan what celebrations he has planned for his daughter and he says, "I did not plan anything, the entire village is celebrating and we are having a grand programme here. I took a break from the programme to speak to you." 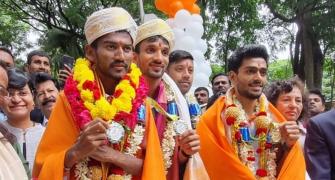 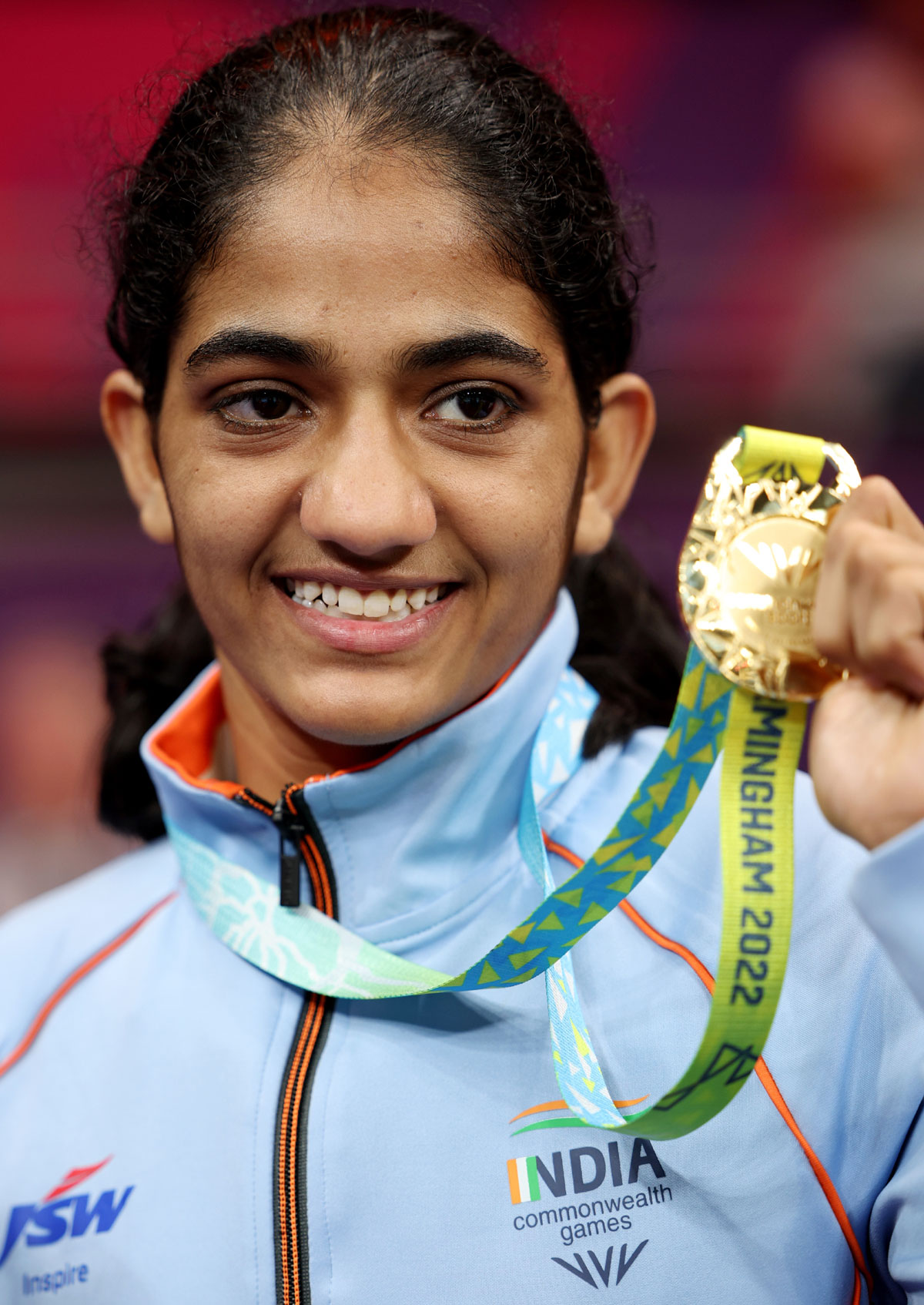 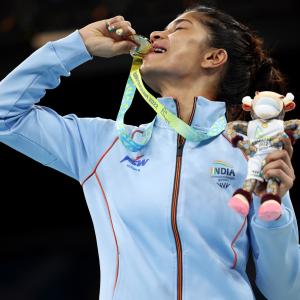