EPL PIX: Chelsea put aside turmoil while Gunners march on

Images from Sunday's action in the English Premier League. 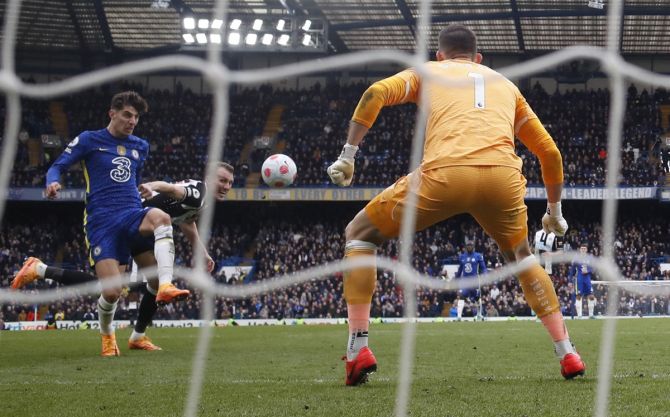 Kai Havertz scored an 89th-minute winner to give Chelsea a 1-0 Premier League victory over Newcastle United on Sunday in their first home match since Britain's government sanctioned Russian owner Roman Abramovich with an asset freeze.

With the European champions adjusting to life under strict rules set out by the government, the visitors frustrated them with their harrying tactics for much of the game as they sought to move further clear of the relegation area.

But with the match seemingly heading for a draw, Jorginho launched a long pass over the Newcastle defence to Havertz and the German controlled the ball with his left foot before firing past Martin Dubravka for his fourth goal in three league games.

Havertz almost had a second in added time but Dubravka got a hand to his shot and the ball dropped onto the bar.

"We kept on believing that we could have this one pass, this one run, this one finish that we finally had."

The action on the pitch at Stamford Bridge was secondary to the turmoil triggered by last week's decision by the government to freeze Abramovich's assets after the Russian invasion of Ukraine, saying he had close ties to President Vladimir Putin over decades. Abramovich has denied having such ties.

The win left the Blues in third place in the table, 10 points behind leaders Manchester City who play on Monday but on course for a top-four finish and a Champions League slot.

Newcastle are 14th, nine points clear of the relegation zone.

The visitors, who had gone nine league games unbeaten, demanded a penalty in the second half when Chelsea defender Trevoh Chalobah appeared to tug the shirt of Jacob Murphy but referee David Coote ignored their claims.

Newcastle fans goaded their hosts, singing "No noise for the bankrupt boys". Chelsea fans speaking before the game said they believed the Abramovich era was over but they expressed hope that a new owner would be found soon.

Abramovich said earlier this month, before he was sanctioned, that he planned to sell the club he bought in 2003 which set Chelsea on a run of success unprecedented in their 117-year history.

There has been no comment from him since the government's asset freeze. The government has invited bids to be made.

Arsenal move back above Manchester United with win over Leicester 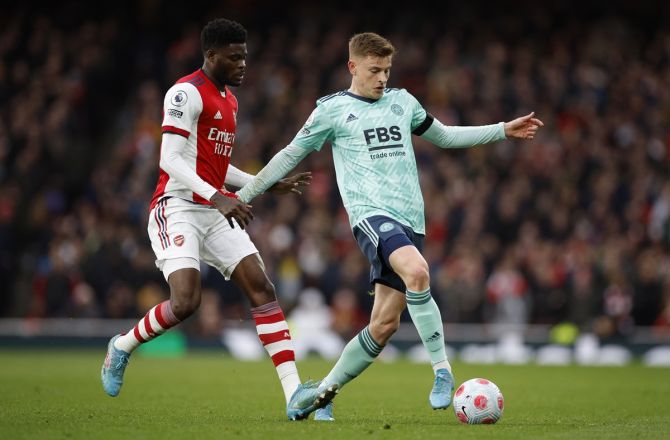 Arsenal returned to the Premier League top four after goals from Thomas Partey and Alexandre Lacazette earned them a 2-0 win at home to Leicester City.

The win moves the Gunners a point ahead of Manchester United but crucially Mikel Arteta's side have three games in hand on their rivals for the final Champions League slot.

Arsenal have now won their last five games and a run of nine wins from their last 11 encounters in the Premier League has transformed their season after a poor start to the campaign.

A return to Europe's elite competition, after a five-year absence, is now within their grasp if they can maintain solid form over their final 12 games.

"We have to be there, we should be there. Our history obliges us to be there but we are not there yet and there are still a lot of games to play," said Arteta, whose side host Liverpool on Wednesday.

"We have an excellent group of people at the club who believe in what we do and then you have to put performance into results. The last few months we have been more consistent."

Partey put Arsenal ahead in the 11th minute with a simple, glancing near-post header from a Gabriel Martinelli corner which was poorly defended by the Foxes.

The home side looked confident and creative with Martin Odegaard impressive in the centre of the midfield but Leicester posed the occasional question on the break.

Arsenal keeper Aaron Ramsdale produced a superb one-handed save to keep out a header from Harvey Barnes but without the threat of the injured Jamie Vardy, Leicester lacked penetration.

Arsenal's second goal came after Kasper Schmeichel parried out an Odegaard free kick and Partey's goalbound header was cleared off the line by Luke Thomas.

The video replay showed that Leicester defender Caglar Soyuncu had reached out a hand towards Partey's header and after reviewing the monitor referee Anthony Taylor pointed to the spot and Lacazette drilled the spot-kick into the roof of the net.

Leicester manager Brendan Rodgers felt the decision had been unfair.

"I am disappointed in the penalty. That there was disappointing, I don't know what else he could do. He was moving but it touched his hand and it was accidental," he said.

Rodgers said his team would now be focusing firmly on their Europa League campaign which sees them face French side Rennes in the round of 16 on Thursday.

"We are not choosy over trophies as we only have the one we can play for. It is a real focus for us but not to take anything away from the Premier League as we want to finish as high as we can," he said. 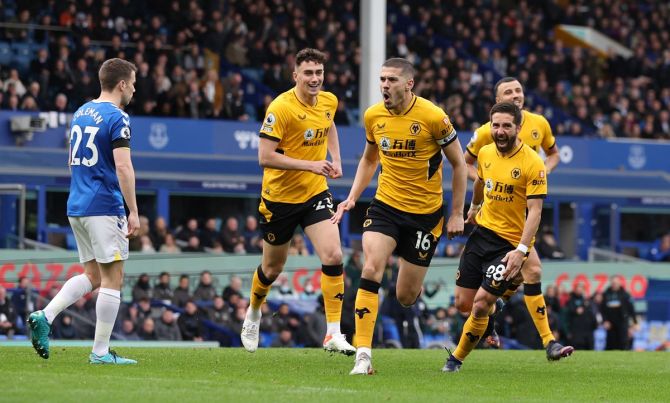 Liverpool fan Coady steered a header into the net from Ruben Neves’ excellent cross on 49 minutes to give the visitors the lead, and Everton finished the game with 10 men when Jonjoe Kenny received two yellow cards.

Everton are in 17th place on 22 points from 26 games, only out of the relegation zone on goal difference, though they do have games in hand on the teams around them. Wolves moved up to seventh with 46 points from 29 matches.

Everton are next in action on Thursday when they host Newcastle United, desperate to find a way to win as the spectre of a first relegation since 1951 looms larger after only two wins in their last 20 Premier League games. 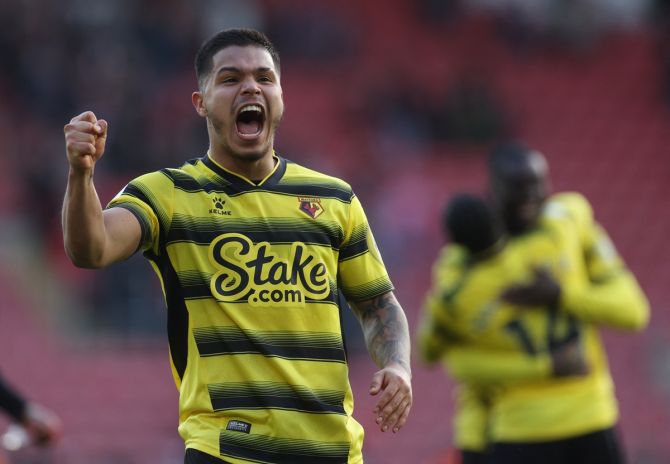 Watford striker Cucho Hernandez made Southampton pay for sloppy defending with two first-half goals that helped the relegation-threatened side seal an important 2-1 victory in the Premier League on Sunday.

The result at St. Mary's Stadium helped Roy Hodgson's team to snap a run of two straight defeats and secure three points that lifted them up one place to 18th, while mid-table Saints were left to rue a third defeat on the trot.

"I thought we played well from the first minute. We weren't doing that badly on Thursday," Hodgson, whose side have lost 3-2 to Arsenal and 4-0 at Wolverhampton Wanderers in their last two matches, told the BBC.

"We're not top of the table, we're near the bottom and when you're 3-0 down players have to show enormous character to get back from that. I'm pleased with the performance today."

Hodgson said that he was delighted with the efforts of his strikers, with Hernandez scoring his third goal in three games.

"The front players gave us another level of energy," Hodgson said. "We created quite a few opportunities to score. Our crowd were incredible today -- it was like a home game. You can't ask more if you're a Watford player."

Watford struck in the 14th minute when Colombian Hernandez pounced on a weak back pass by Southampton's Mohammed Salisu and found the target from a tight angle after rounding goalkeeper Fraser Forster.

An unmarked Hernandez doubled Watford's lead 20 minutes later when he steadied himself and volleyed in a cross from Juraj Kucka, after a patient spell of build-up play by the visitors.

Watford had several chances to go 3-0 up but Southampton pulled one goal back before halftime, as Mohamed Elyounoussi tapped in Che Adams's flicked header following a free kick from James Ward-Prowse.

Southampton continued to press after the break but Watford defended bravely and rode their luck late on when they conceded a foul in a dangerous area, and Ward-Prowse narrowly missed the mark from the resulting free kick. 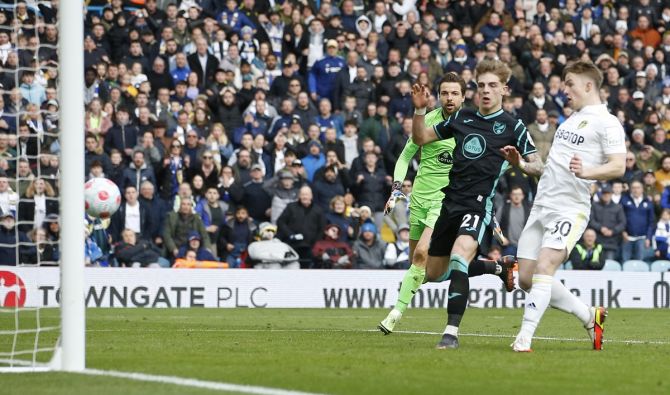 Joe Gerhardt came off the bench to score a stoppage-time winner for Leeds United as they snatched a thrilling 2-1 home victory over fellow strugglers Norwich City in a pulsating Premier League clash on Sunday.

Leeds took the lead in the 14th minute when a long ball was headed clear by Norwich defender Ozan Kabak to Dan James, who chested it into the path of Rodrigo, and he fired a deflected shot in at the far post.

The home side wasted chance after chance before Norwich's Kenny McLean scored in the 91st minute but Gerhardt had the last laugh, slamming the ball home from close range to send the crowd into raptures and snap his team's eight-game streak without a league win.

A seventh straight league defeat for Norwich left them rooted to the bottom of the table on 17 points after 29 games, while Leeds are 16th on 26 points, four above 18th-placed Watford.

© Copyright 2022 Reuters Limited. All rights reserved. Republication or redistribution of Reuters content, including by framing or similar means, is expressly prohibited without the prior written consent of Reuters. Reuters shall not be liable for any errors or delays in the content, or for any actions taken in reliance thereon.
Related News: Chelsea, Norwich, Abramovich, Kai Havertz, Newcastle United
COMMENT
Print this article 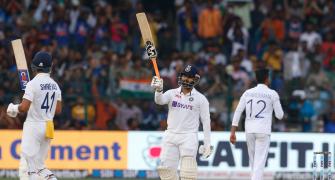 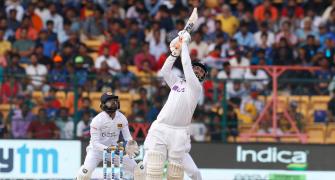 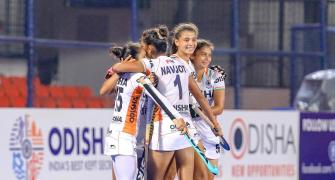 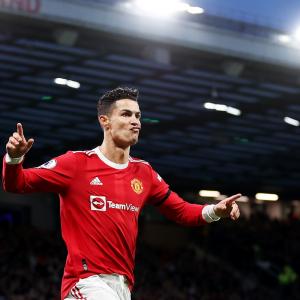 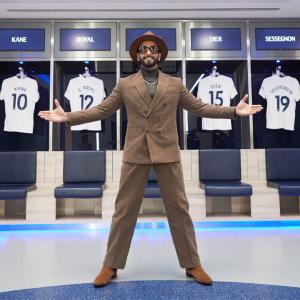