Venugopal is valued highly by Mrs Gandhi and Mr Gandhi.
They consider him a loyalist, more to the point, one who can deliver, observes Aditi Phadnis. 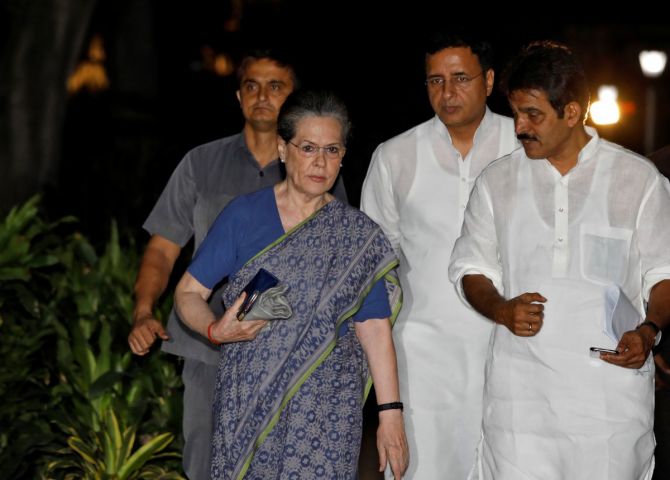 He belongs to Kerala's Kannur district (in the north) but has been elected several times, both to the assembly and the Lok Sabha, from Alleppey in the south of the state.

A nice Nair boy who has a master's degree in mathematics, he could have got any job he wanted.

But he opted for politics.

And though his Hindi is a bit wobbly, he was the general secretary dispatched to sort out the recent Congress mess in Rajasthan.

At a meeting of top leaders of the party, he said what he thought of them quite bluntly, apparently secure in the confidence that Those Who Matter would back him.

That makes him a hatchet-man.

Who is K C Venugopal, where did he come from, and where is he going?

In the Congress in Kerala, there have always been at least two factions.

One was led by K Karunakaran, the other by A K Antony.

If you wanted to get anywhere in politics in the state, you needed to be part of one or the other.

Mr Venugopal chose Karunakaran, who embraced him enthusiastically, backing him to head the Youth Congress.

This he did, for seven years at that.

But he also realised that he had a rival: Ramesh Chennithala, also a Nair and a highly efficient and organised politician.

But at that time, Mr Venugopal could see the glass ceiling.

So slowly and skilfully, he slid out and joined Mr Antony.

Mr Karunakaran was ailing and died in 2010.

But Mr Antony was very much a pillar of the establishment. Ahead of the Kerala assembly elections in 2011, Mr Antony persuaded Manmohan Singh to induct Mr Venugopal as a minister, arguing that the Nairs needed a voice in the council of ministers.

By then, Mr Venugopal had been a three-term MLA and a minister in the state, but had resigned his assembly seat to contest and won the Alleppey Lok Sabha seat in 2009.

So he was a first-time MP and he got the power portfolio.

Interestingly, his entry into the council of ministers coincided with the exit of Shashi Tharoor (also from Kerala), who had to resign over an investment matter concerning a team that took part in the Indian Premier League.

This tension was to resurface later.

The Congress lost badly in 2014 but Mr Venugopal was re-elected, again from Alleppey.

In 2017, he became party general secretary.

The Congress had emerged single-largest in the 40-member assembly with 17 MLAs.

But skulduggery was afoot and Digvijaya Singh and Mr Venugopal were sent to help the local Congress.

Even before the party could lay claim to form the government, one of its MLAs, Vishvajit Rane, resigned, taking two Congress MLAs with him.

It was a classic crisis -- and Mr Digvijaya Singh just could not be contacted.

The Congress lost Goa to a chortling BJP.

Mr Venugopal returned to Delhi to relate the whole sorry tale of how the party snatched defeat from the jaws of victory.

He also settled all the accounts promptly.

This was duly noted and the next time there was a crisis -- in Karnataka -- it was he who was picked again.

He would be sent to Maharashtra and later, Rajasthan, to douse the fire.

Then came the 2019 general election.

It became clear to the party that Rahul Gandhi's Amethi seat was no longer safe.

P Chidambaram offered Tamil Nadu, but that meant hanging on to the coat-tails of the DMK.

The Bellary seat in Karnataka, which Sonia Gandhi had contested in 1999 (and won), was an option but in the delimitation it had become a reserved seat.

But help from the Janata Dal-Secular would have been needed and there were no guarantees about its cooperation.

Mr Venugopal and Mr Antony offered Wayanad in Kerala, where the Congress did not have a candidate -- M I Shahnavas, a two-term MP, had died in 2018.

To ensure success, Mr Venugopal made the ultimate sacrifice: He opted not to fight the election, focusing instead on managing Mr Gandhi's campaign.

The Congress lost Alleppey: Of the 20 Lok Sabha seats, it won 19.

Admittedly, A M Ariff of the CPI-M won the Allepey seat by a margin of just 10,000 votes.

But Mr Gandhi won Wayanad by a huge margin.

And Mr Venugopal won as well.

The commonest complaint about Mr Gandhi is that he doesn't meet people: When Mr Tharoor sought a meeting, he was advised to make an appointment through Mr Venugopal.

Mr Venugopal has emerged as the go-to guy.

As general secretary (organisation), he knows the party intimately now.

On the other hand, proximity to the People Who Matter has earned him enemies as well.

He is not especially communicative at the best of times, particularly in Hindi.

However, he is valued highly by Ms Gandhi and Mr Gandhi -- they consider him a loyalist, more to the point, one who can deliver.

Eventually his sights are set on the chief minister's job in Kerala.

He may make it there eventually. 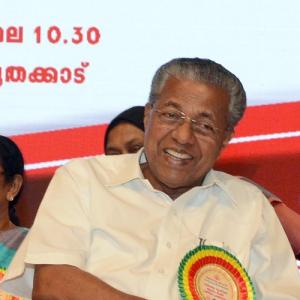