News
Business
Movies
Sports
Cricket
Get Ahead
Money Tips
Shopping
Sign in  |  Create a Rediffmail account
Rediff.com  » News » Why this CM is the toast of India

Kerala's Pinarayi Vijayan is a cut above the rest in Indian politics today, precisely in his remarkable ability to look beyond the horizon.
His was probably the only government that began planning for the incoming pandemic as early as in February, notes M K Bhadrakumar. The huge outpouring of greetings from all over the country to Pinarayi Vijayan on his 75th birthday, especially from Prime Minister Narendra Damodardas Modi, bears testimony to his extraordinary political personality both at the regional as well as at the national level.

The birthday fell on the eve of the fourth anniversary of the government Vijayan leads in Kerala. There is universal acclaim today among Malayalis that the Left Democratic Front government in Kerala led by the Communist Party of India-Marxist has been one of the best governments -- arguably, in my opinion, the best -- the state has seen since 1956.

That is saying a lot since Kerala has also had more than a fair share of good administrators heading the governments in these past six decades and more. But then, Pinarayi stands out as exceptional as a strong and decisive leader who gives the highest importance to performance.

Kerala's handling of the pandemic has been noticed world over and has won praise from even the Bharatiya Janata Party, the CPI-M's ideological rival, whose Maharashtra unit has demanded that the state government in Mumbai should emulate Pinarayi's stellar example. It is a rare happening in the highly polarised political atmosphere in the country.

The BJP and CPI-M are at loggerheads and occupy opposite ends of the political and ideological spectrum. But what draws attention is that Pinarayi crosses the divides in the body politic with merry abandon, nonchalantly.

And what makes this possible is his commitment to the idea of India. 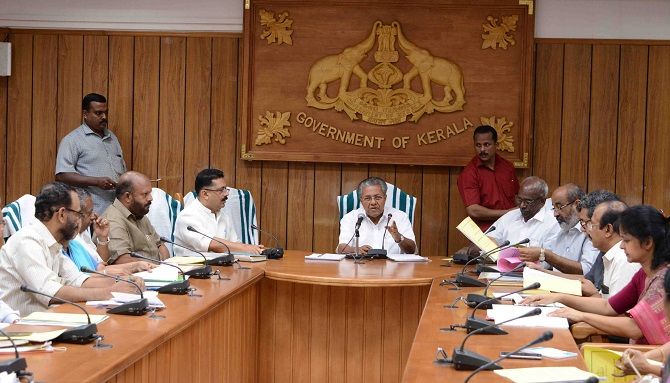 Pinarayi it was who first drew national attention in the wake of the pandemic to an impending social upheaval in the country unless the plight of the migrant workers was addressed. He stressed at the PM's videoconference with chief ministers the urgency of deploying special trains to transport the migrant workers to their home states.

Looking back, the delay in implementing Pinarayi's suggestion has cost the Modi government heavily in political terms.

To my mind, no matter the criticism by the Opposition parties and other detractors of Modi, he has handled the pandemic crisis almost optimally so far under the circumstances, considering the heavy odds in terms of lack of resources and the state of the economy and so on.

But the tragedy of the migrant worker has come to blight the overall performance.

Where Pinarayi is a cut above the rest in Indian politics today is precisely in this remarkable ability to look beyond the horizon.

His was probably the only government that began planning for the incoming pandemic as early as in February, no sooner than the first reports from Wuhan began drifting in.

And when the lockdown was announced on March 25, the juggernaut was already on the move in Kerala thundering into the countryside to battle the medieval virus.

The result is plain to see: When India utilised the lockdown to mobilise for the warfront, Kerala was already at the barricade on the frontline.

This must be Pinarayi's finest hour in a tumultuous career of some six decades.

Nothing would have given him greater satisfaction than that he could save precious human lives.

Only someone who is intensely conscious of the human condition can be so fanatically devoted to the welfare of people's lives.

Only someone who knew abject poverty in his personal life would understand the exhilarating joy of life. Pinarayi reminisced recently on his Facebook page on Mother's Day on the sheer struggle to survive in his childhood and the great sacrifices his mother had made to bring him up, with an iron resolve to educate him, her youngest son, with a burning ambition borne out of infinite love.

It was a rare peep into Pinarayi's inner world, and it was profoundly moving for anyone who ever understood the seamless love in life that only a mother could give.

On a personal note, I can claim familiarity with Pinarayi only over the past decade-and-a-half after I left the diplomatic service and joined the Communist Party of India-Marxist.

Pinarayi struck me for his Churchillian will power and his 'fight them on the beaches' moments in Kerala's highly competitive politics and that certain brusqueness that is innate to all self-made men.

But in the most recent years, Pinarayi has transformed.

Albert Einstein once said, "'Look deep into nature, and then you will understand everything better.' Pinarayi apparently did that.

The 2018 Kerala floods and the current pandemic brought him face to face with nature, and by discovering nature 'red in tooth and claw', the Communist may have discovered himself.

Nature mellowed Pinarayi. Nature's secret is patience. But, in the process, as he took a walk in the woods, he has come out taller than the trees.

Ambassador M K Bhadrakumar is a frequent contributor to Rediff.com 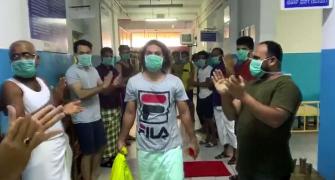