Even though it was stated that no action would be taken against the senior leaders who had written to Sonia Gandhi, they say that the retaliation had already begun, reports Aditi Phadnis 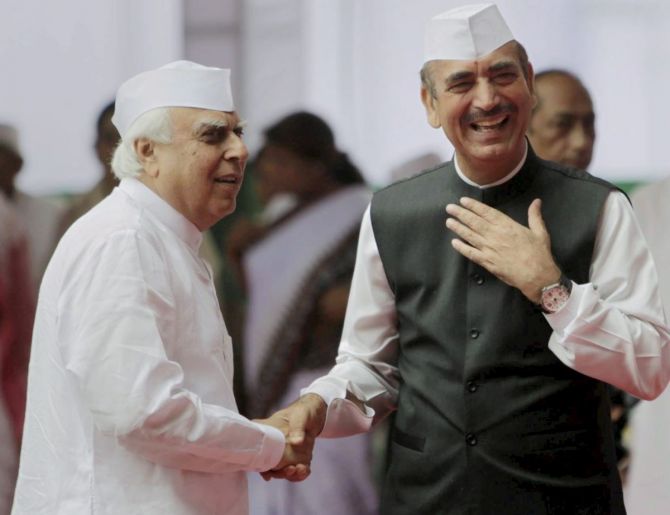 IMAGE: Kapil Sibal and Ghulam Nabi Azad are among the 23 leaders who wrote the letter to Sonia Gandhi asking for an organisational overhaul in the Congress. Photograph: PTI Photo

At a meeting of the Congress Working Committee held last week, party president Sonia Gandhi said that while she was hurt at a letter written by 23 senior leaders charging leadership ‘drift,’ no action would be taken against them. However, some of the dissenters have dismissed this statement as humbug and said the retaliation had already begun.

“Unfortunate that Jitin Prasada is being officially targeted in Uttar Pradesh Congress needs to target the Bharatiya Janata Party with surgical strikes instead wasting its energy by targeting its own,” senior Congress leader Kapil Sibal tweeted. The post came after the district Congress president in Prasada’s area, Lakhimpur Kheri, passed a resolution calling him a ‘traitor’ and sought his expulsion.

Dheeraj Gujjar, the district Congress president claimed he was instructed by an unnamed All India Congress Committee general secretary to release the statement.

On Wednesday late evening, Congress general secretary (organisation), KC Venugopal, issued a letter announcing that a five-member committee was being set up to study and align the party’s stand on several ordinances. The government would seek to clear those in the forthcoming parliament session.

The members of this committee would be P Chidambaram, Digvijay Singh, Jairam Ramesh, Gaurav Gogoi, and Congress MP from Ludhiana, Dr Amar Singh. Missing were the names of the other two top lawyers: Abishek Singhvi and Manish Tewari -- MP from Anandpur Sahib and another signatory to the letter.

In another interesting development, Shiv Sena mouthpiece Saamna, in an editorial, criticised the Congress dissenters: unusual because Shiv Sena has no locus standi in judging the internal affairs of the Congress party.

Former Maharashtra Chief Minister Prithviraj Chavan -- who was one of the architects of the Sena-Congress government and braved extensive opposition to the idea especially from Sonia Gandhi -- is a signatory to the letter.

Clearly now, he is a target.

Former Union Minister Veerappa Moily, also a signatory, said in a statement, after the CWC meeting, that "it is an admitted fact that organisation of the Congress party is not in a position to take forward the party philosophy and protect the democracy in the present turbulent condition prevailing in the country."

Moily had lost the Chikkaballapur Lok Sabha constituency and was among several senior members of the Congress in Karnataka to have lost the election.

But party rival and SC leader Mallikarjun Kharge succeeded in bagging the Rajya Sabha seat when elections to the upper house were held in June. Congress needs to target BJP, not its own: Sibal