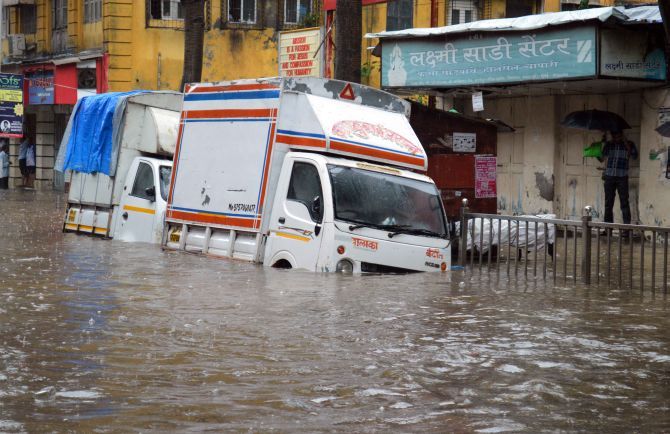 A tempo partially submerged in water on a flooded road in Parel area of Mumbai on Monday. Photograph: Sahil Salvi/Rediff.com

Heavy rains lashing Mumbai overnight and early on Monday hit road and rail traffic, causing puddles at the city's perennial flooding spots, while the civic administration sought to disown responsibility for the waterlogging woes at the onset of monsoon.

Municipal Commissioner Praveen Pardeshi said 540 mm of rain fell in two days in the city, the highest over a two-day period in a decade, and attributed ‘climate change and changed geographical conditions’ for waterlogging at several places. 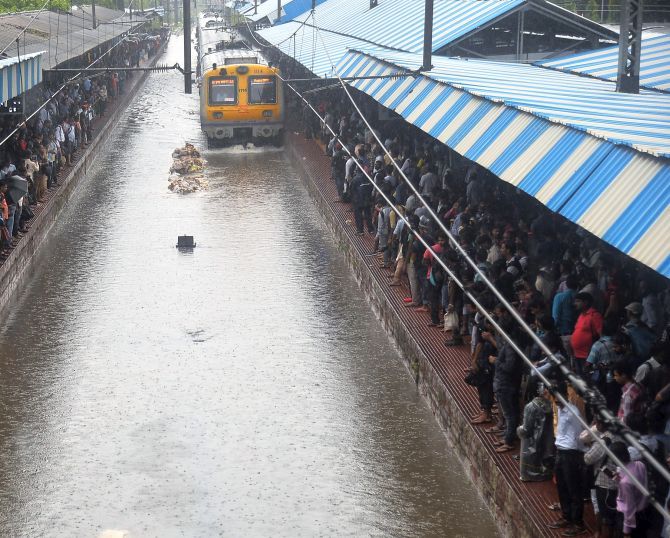 The inundation is due to high amount of built-up area in Mumbai and the low proportion of water seepage into the ground in the last 50 years, he said. 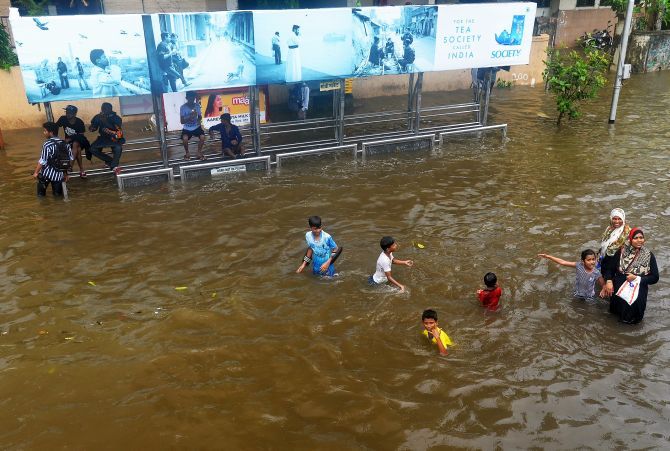 For children, it was a day of fun -- with all the splashing around on flooded roads. Photograph: Sahil Salvi/Rediff.com

Mumbai Mayor Vishwanath Mahadeshwar said there was waterlogging in some areas but it was incorrect to say that the city was ‘inundated’ after heavy rains.

The Meteorological Department warned of 'extremely heavy' rainfall in adjoining areas of Thane and Palghar on July 2, 4 and 5. 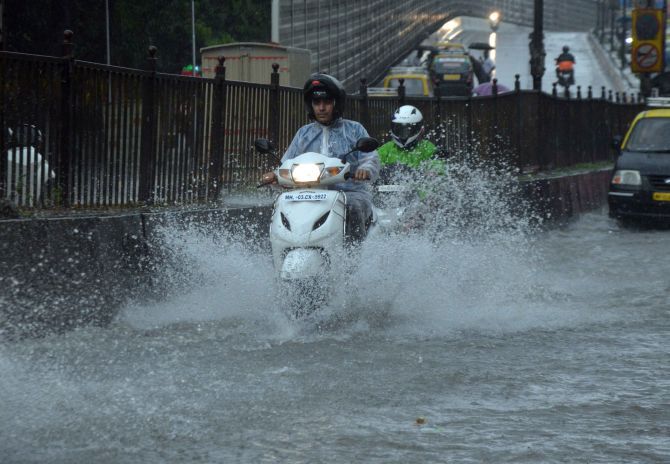 A few places in Mumbai could get heavy to very heavy rainfall Monday and Tuesday, it added. 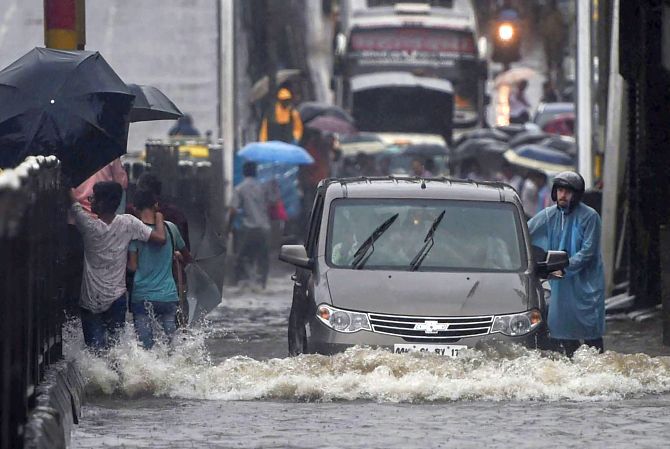 Traffic snarls were seen all over the city thanks to the heavy rain. Photograph: Shashank Parade/PTI Photo

Though there was a respite from the heavy showers in the afternoon, many suburban trains were running late.

In a few areas like Chembur, water entered houses, prompting citizens to blame the BMC. 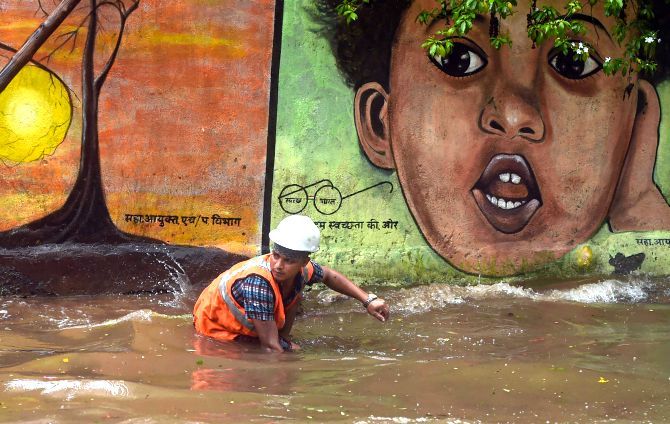 "The civic administration has not done enough to avoid such a mess during rains," said P Krishnakumar, a Chembur resident, as he surveyed water in his house. 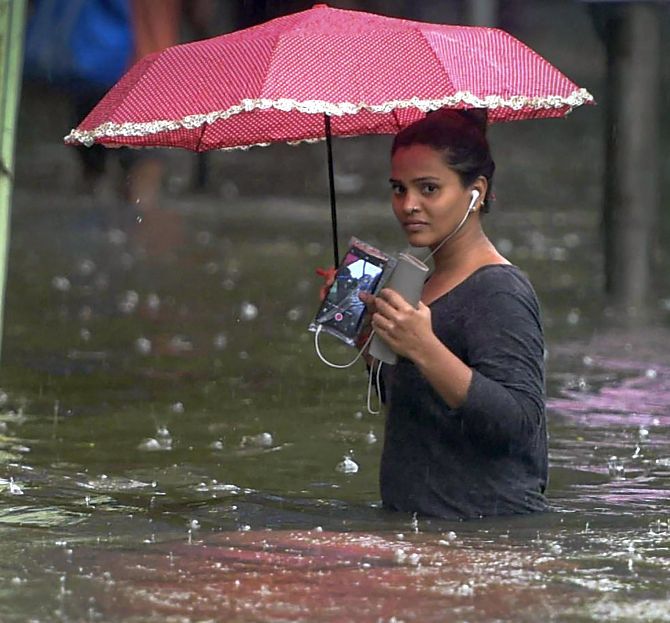 A woman wades through waist-deep water in the suburbs of Mumbai. The weather station in Santacruz recorded 91 mm of rainfall in 24 hours ending at 8.30 am on Monday. Photograph: Shashank Parade/PTI Photo

Areas like Hindmata, Parel, Lalbaug, Senapati Bapat road were water-logged. Water-logging was also witnessed in a few buildings in Wadala. 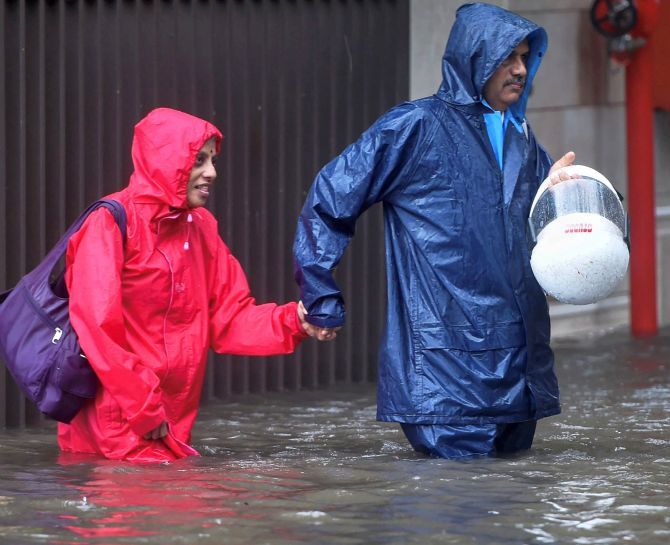 Thanks to the heavy rain, thousands of state government employees and private staff were not able to go to work. Photograph: Shashank Parade/PTI Photo

Wall collapse incidents were reported from 12 places in the city. A retaining wall collapsed in Ashwa Garden in Sewree, but nobody was injured, police said.

The owner and staff of private firm Jolly Brothers Private Limited in Kanjurmarg were booked for dumping debris which caused water-logging on the railway tracks and roads in the area, police said.

An official said the site of debris dumping was an open plot alongside a drain near the Jogeshwari-Vikhroli Link Road and Seth Jolly Road.

On Monday, railway tracks between Sion and Matunga stations were submerged and movement of local trains was slowed down considerably. 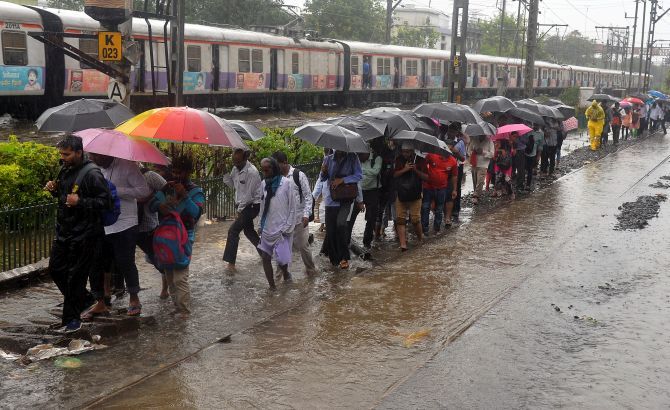 People get off the trains and walk on the tracks at Sion as services get affected due to heavy showers. Photograph: Sahil Salvi/Rediff.com

Children swam knee-deep waters of what otherwise is a busy road in Hindmata area of Dadar.

There will be a 3.84 metre high tide at around 10.54 pm Monday, civic officials said and warned people not to go close to the sea during this period. The high tides occur due to gravitational pull between the earth and the moon.

'Mumbai, we understand its not been an easy Monday, but its also been a rain spell like never before -- it’s the highest in a decade. 550 mm average of entire month of June has been exceeded in just last 48 hrs. We are truly trying our best. We request a bit of caution & patience (sic),' the BMC tweeted. 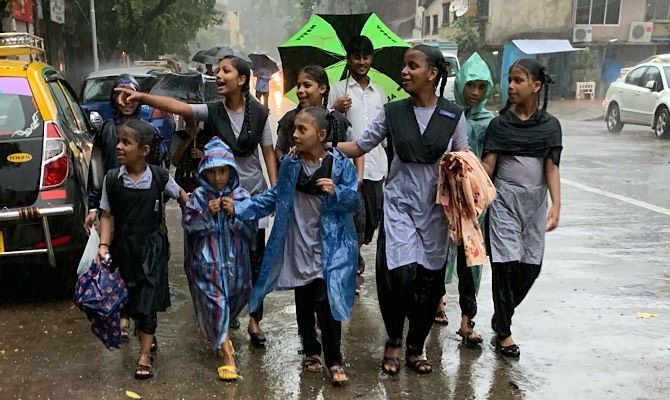 Kids on their way to school on Monday morning. Authorities have said that nearly 64.9 per cent (327.7mm) of rain required in the month of June was received in the last three days. Photograph: Mahipal Soni/Rediff.com

It also requested citizens to avoid driving in waterlogged areas till the water is pumped out.

Railway Minister Piyush Goyal is keeping a close watch, specially on services and arrangements for safety of commuters and is in constant touch with the senior railway officials, the Western Railway said in a tweet. 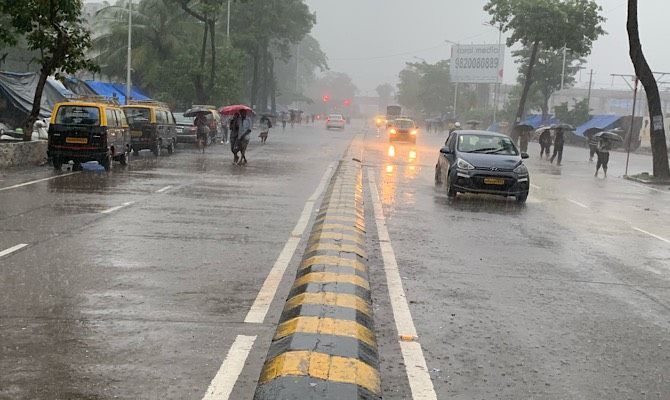 A huge crowd was seen at the Thane station as heavy rains delayed train services on the Central Railway line.

Heavy rains during the night and on Monday morning in Mumbai and its outskirts inundated low-lying areas, delayed trains and slowed down vehicular movement on roads.

Several local train services, considered the lifeline of Mumbai, were cancelled or short-terminated as a temporary bamboo structure erected for civil work fell on an overhead wire near the Marine Lines station on the Western line, an official said.

The vehicular movement from suburbs towards south Mumbai and the Bandra-Kurla Complex, where several corporate houses and private companies are located, was slow due to the incessant showers. 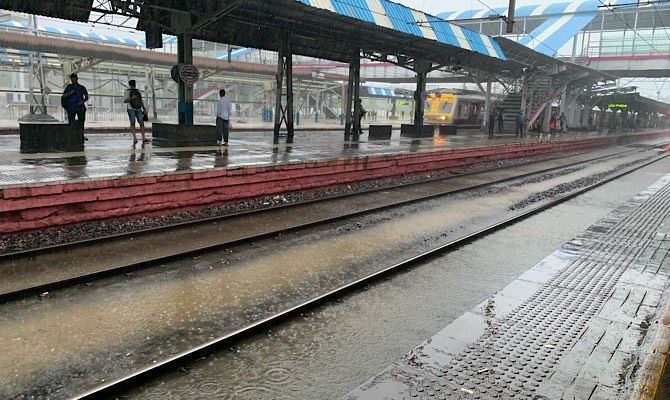 Water starts to collect on railway tracks, which could lead to the closure of the railway system -- the lifeline of Mumbai's transport system. Photograph: Mahipal Soni/Rediff.com

After heavy rains in Palghar district and a rail track suffering damage near Lonavala hill station in Pune, 17 long-distance trains of the Western Railway and more than 10 of the Central Railway were cancelled in the morning, the official said.

A goods train derailed in the early hours of Monday in the Western Ghat section between Karjat and Lonavala, affecting the movement of several long-distance trains going towards Pune and western Maharashtra, a CR official said. 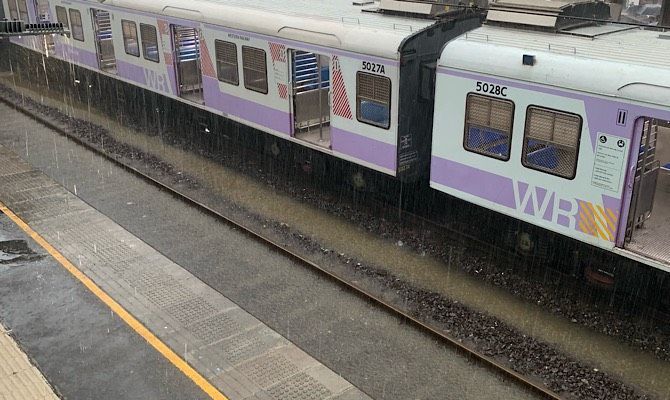 Trains were reported to be running a bit slow owing to the water collection on the tracks. Photograph: Mahipal Soni/Rediff.com

Some trains were also short-terminated and others diverted via Kalyan-Igatpuri-Manmad section. The shuttle train services between Mumbai and Pune were also affected, the official said.

Thousands of state government employees and private staff were not able to go to work, a government official said. 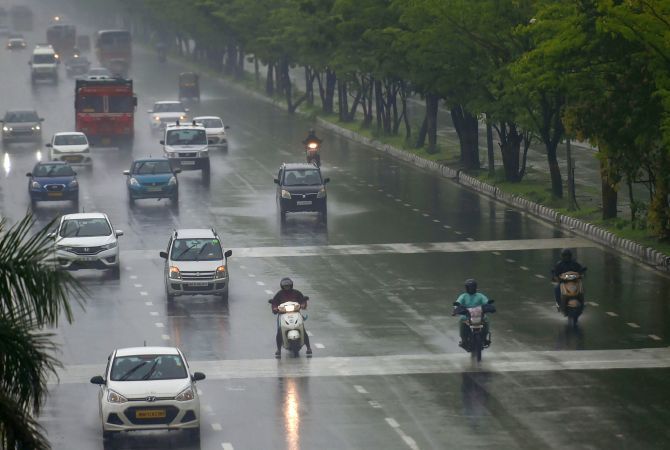 A portion of a dilapidated three-storey building collapsed at Kalyan town in Thane on Monday afternoon, an official said.

No casualty was reported as all residents of the building, which was declared dangerous, were evacuated sometime ago, the official at the district disaster control room said. 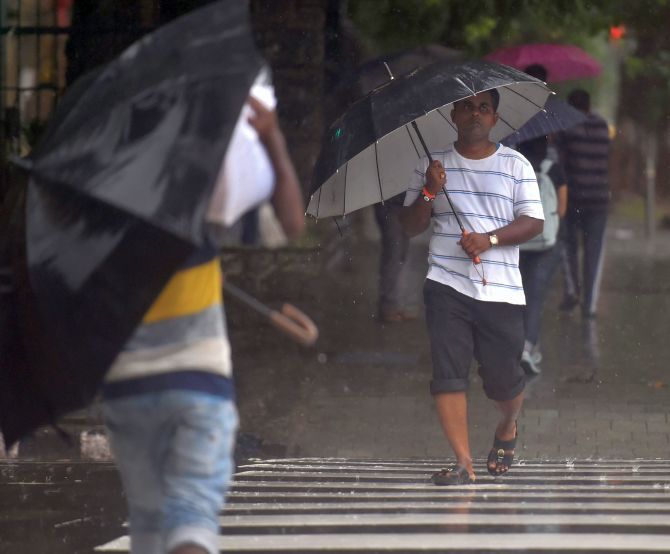 Local firemen and personnel from the district disaster control cell rushed to the spot on getting information about the incident that took place around 3 pm, he said.

The Kalyan town and other areas of Thane district have been receiving heavy rainfall since Sunday, the official said, adding that this could have led to the mishap. 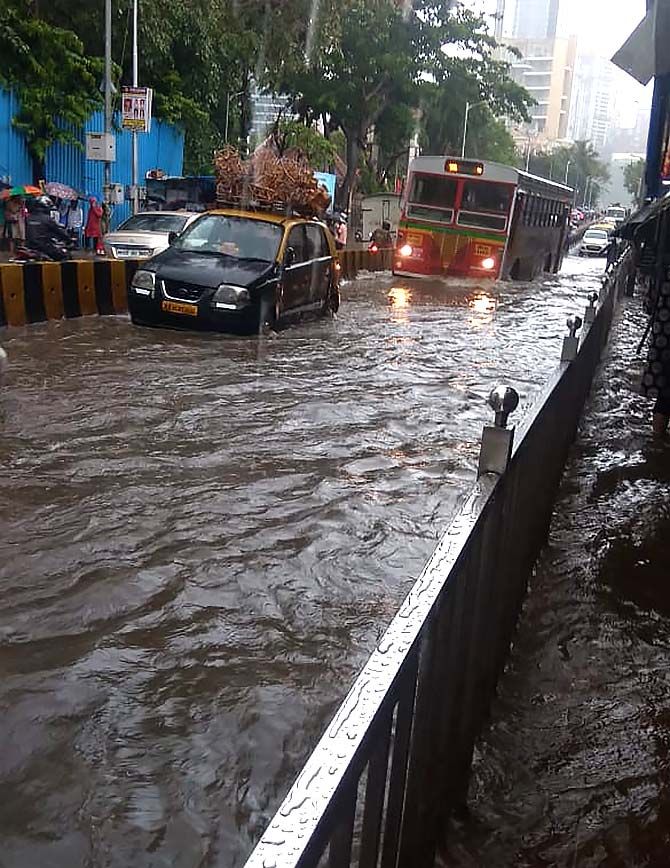 Palghar Disaster Management Cell chief Vivekananda Kadam said villages along the rivers here have been put on high alert due to the rains.

Surya, Vaitarna and Pinjal rivers in the district are swelling, he said. 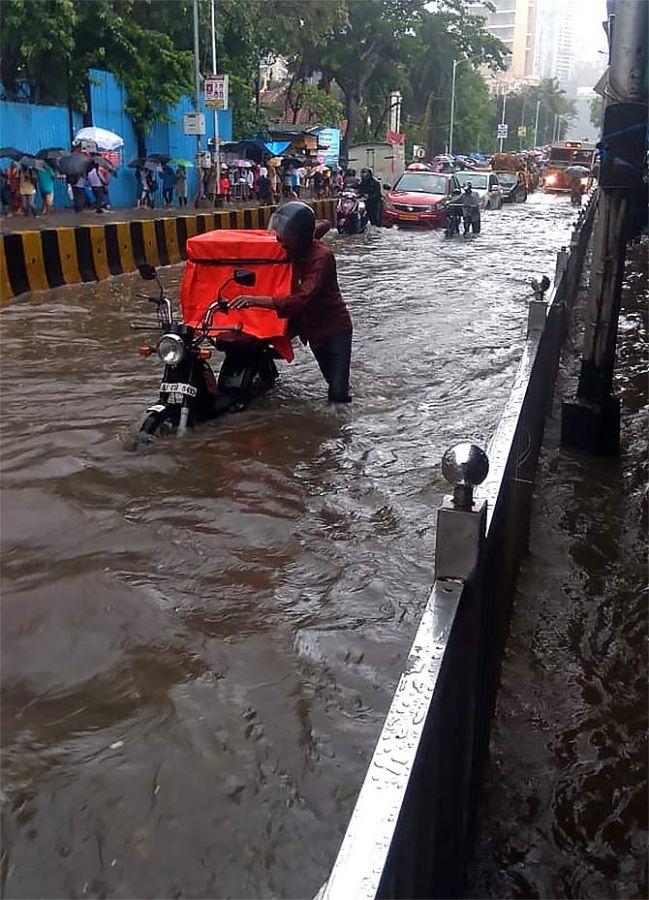 According to the IMD, intense spells of rainfall is likely to continue in Mumbai, Thane, Raigad and Palghar during the next two hours. Photograph: Satish Bodas/Rediff.com

In another rain-related incident, a man Monday drowned at a waterfall in Ambernath in Thane district. 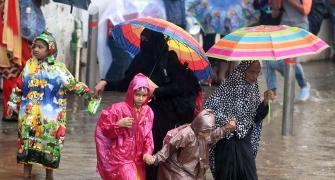 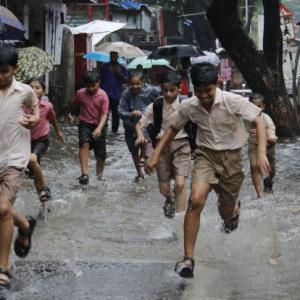 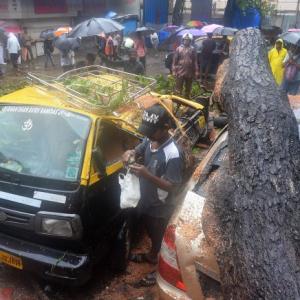