'It is surprising Mumbaikars take it all in their stride, but it has nothing to do with the crappy spirit of Mumbai that television channels extol every time a tragedy hits us, but all to do with the compulsion of stepping out to earn one's daily roti and dal,' says N Suresh. 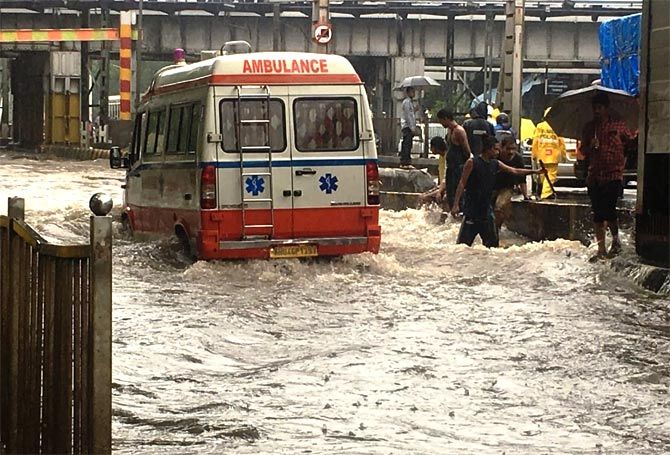 IMAGE: An ambulance wends its way through a flooded area in Mumbai, June 3, 2018. Flooding is a regular occurrence in Mumbai during the monsoon, with neither the civic nor state administrations tackling this and other disasters. Photograph: Sahil Salvi

The promises are tall, of converting Mumbai city, at least on paper, from its current moribund state to a virtual city, which sounds like straight out of a Hollywood film.

All this at a cost, of course, to the environment.

A coastal road, for which environmental regulations have been tweaked, an underground metro for which thousands of trees have been felled, not to mention round the clock noise as the tunnelling work progresses day and night, for which again norms are being tweaked.

The city is being dug up for a better tomorrow, we are told, thereby bringing traffic to a grinding halt; power and utility cables are wrongly dug; water-logging is rampant, but all we hear is that India is indeed shining.

Also, in case we forget, the only city in the world to have a national park, will soon lose this glory with the government's obstinate stand of building a metro rail shed in the forest zone.

Naturally, then, if we have so much of development, some will want to live in smart and gated communities, where again more rules will be relaxed.

All the talk of a bright tomorrow has blinded officials and the government to the task of ensuring that basic amenities, which are a citizen's right under the Constitution of India, are not denied.

Instead, their rights are being compromised every day.

With noise pollution and environmental norms being flouted, the lives of the populace is being compromised -- a point noted sternly by the Bombay high court.

When citizens are denied the basic right to clean air and peaceful life, their very existence is disrupted.

Moreover, in a bid for a better tomorrow, our today is being ignored to the extent that authorities have compromised on the safety of the city's inhabitants.

Last year, an overbridge at Charni road collapsed; later, a stampede on a crammed bridge at Elphinstone road killed many.

And this year, within barely a month of the monsoon setting in, we saw on July 3 that a slab of a bridge had collapsed, with minimal human cost thanks to an alert motorman.

On the same day a BEST bus drove into a height barrier. And just the previous week a chartered flight that took off in bad weather crashed into an under-construction site killing all on board and a pedestrian.

As if all this is not enough, people continue to die after falling into open manholes in this metropolis variously described as an international city and the financial capital of India.

The pathetic part is the amount of indifference shown by the authorities every time an accident occurs, thereby allowing the cause of the mishap to be lost in a vicious blame game.

Every government has failed the people of Mumbai.

Regular security checks are not done, basic decent amenities are not provided without a struggle, which is the right of the people.

It is surprising Mumbaikars take it all in their stride, but it has nothing to do with the crappy spirit of Mumbai that television channels extol every time a tragedy hits us, but all to do with the compulsion of stepping out to earn one's daily roti and dal.

It will need a revolution to get the authorities to wake up.

But more than that, it needs aware citizens who demand their rights in return for the taxes they pay.

It is the need of the hour to make politicians accountable.