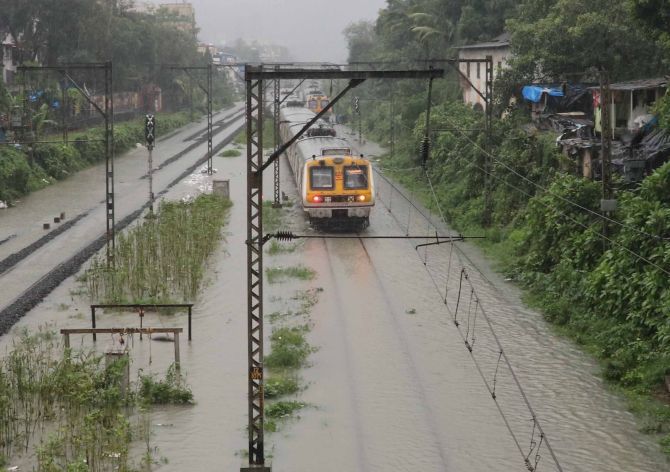 The India Meteorological Department (IMD) has predicted intense showers in Mumbai and its neighbouring areas in next 24 hours and issued a 'red alert', asking the
authorities to be prepared to handle any situation.

The state government has asked the officials concerned to monitor the inflow of water in dams in western Maharashtra, where some districts were ravaged by floods last month. 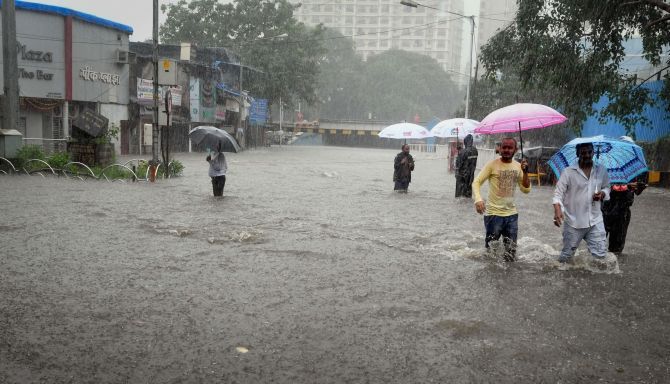 The Mumbai civic body asked all schools to remain shut and to ensure that the students were sent back home safely.

Over 100 villages in Gadchiroli and Gondia in Vidarbha region and several others in Ratnagiri and Sindhudurg of Konkan region were cut off from other parts of the respective districts due to water-logging on roads, officials said.

Landslides were also reported in some Western Ghats areas of Raigad and Sindhudurg districts. 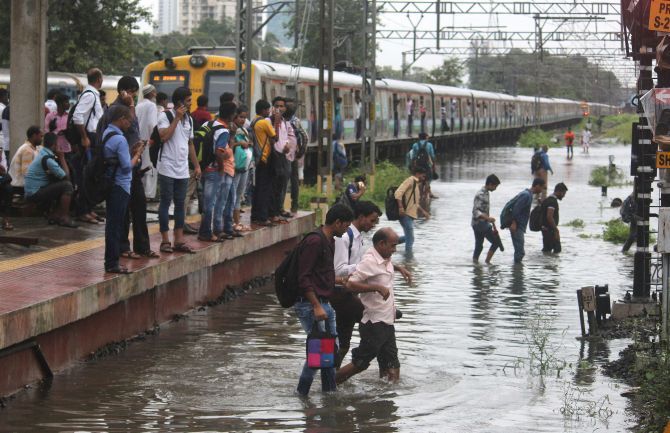 After a brief lull last week, the south-west monsoon again got activated, leading to heavy downpour in Mumbai and several other parts of the state on Wednesday.

The heavy rains made a comeback at a time when people across the state are celebrating the 10-day Ganesh festival.

In Mumbai and its suburbs, the heavy downpour caused flooding in low-lying areas, leading to cancellation of several local trains on the Central and Harbour railway lines and some sections of the Western line. 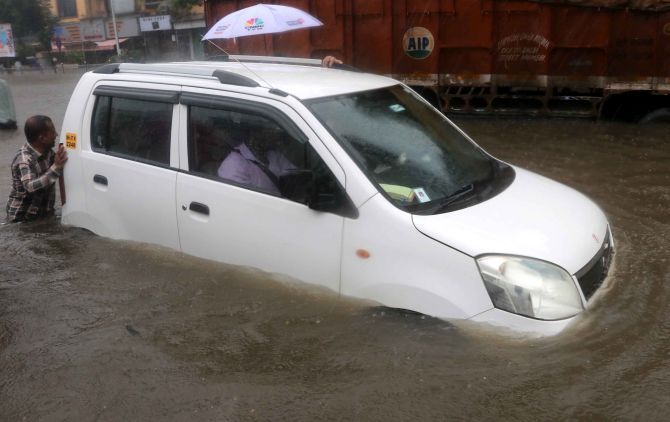 The Western Railway said trains on its slow lines were suspended between Churchgate and Vasai Road due to water-logging (about 180 mm above tracks) at Matunga Road.

However, the services were running on its fast lines between Churchgate and Vasai Road.

It also said that the water level went above 300 mm at Nallasopara, in view of which trains were stopped temporarily between Vasai and Virar.

In the morning, rail services were also affected due to a 'point failure' at Virar, the Western Railway said. 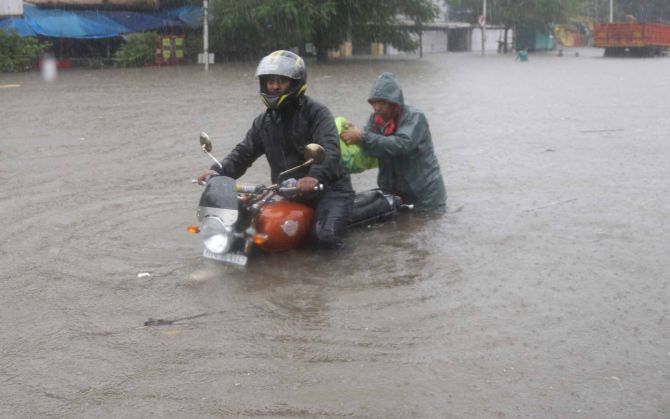 The Jaipur-Mumbai Duranto Express was stranded near Vaitarna station for over an hour due to flooding on tracks.

Some passengers of the train complained that the railways did not update them about the situation.

A Mumbai airport official said five incoming flights had to do go around while the flights were delayed by an average 25 minutes. 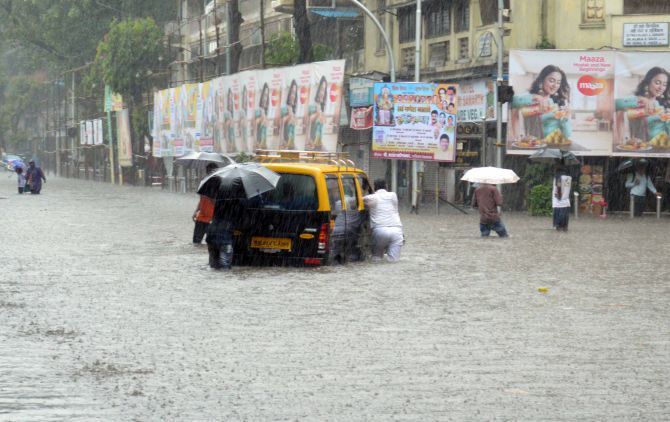 Vehicular movement on roads in Mumbai and its suburbs was also slow due to flooding.

Out of the 150 weather stations in the Mumbai Metropolitan Region (MMR), around 100 recorded over 200 mm rainfall in last 24 hours, the IMD said.

"This shows how widespread the rainfall has been over Mumbai. We have issued a red alert for various places, including Mumbai city and suburbs, Thane and Palghar districts, for next 24 hours," an IMD official told PTI. Low pressure over the Bay of Bengal has resulted in torrential showers in Mumbai Thane and Palghar, he said.

The neighbouring Raigad district received almost 300 mm rainfall in last 24 hours, 'but going by the progress of clouds, no red alert has been issued there', he said. Yuva Sena chief Aaditya Thackeray in a tweet said the city has witnessed the 'heaviest rainfall so far, with the total rainfall mark exceeding the whole of September in just about 30 hours'.

The Brihanmumbai Municipal Corporation (BMC) and the police were making all efforts to keep people safe, he said.

The Mithi river in the city was also flowing close to the danger mark, he said, adding that the National Disaster Response Force (NDRF) and other agencies were alerted. 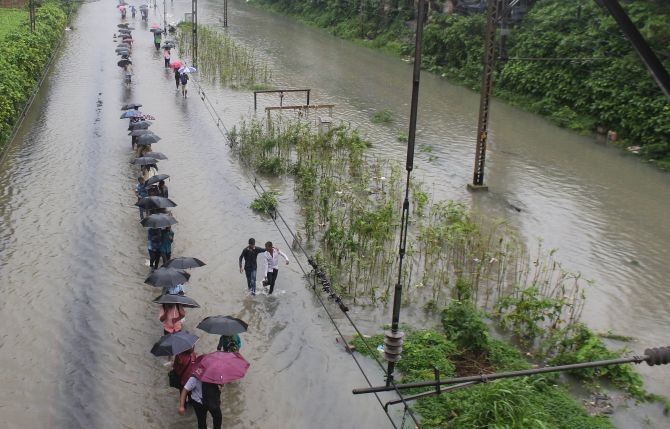 Following heavy rains in neighbouring Thane, collector Rajesh Narvekar also asked the schools in the district to be closed for the day.

The state water resources department asked the officials concerned to closely monitor the inflow in dams and precipitation in their catchment area in western Maharashtra.

"It is a preventative measure to avoid any excess release of water in the river beds which could affect people residing near the river banks," a senior official said. 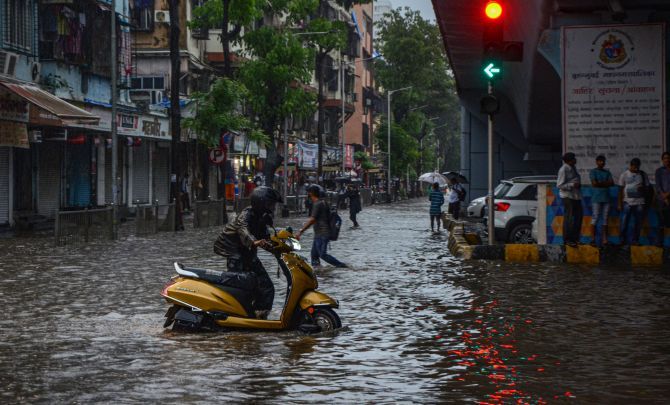 "The Koyna dam in Satara district has already started discharging over 38,000 cusec water since morning. Tributaries of the Krishna river have received heavy rains in last couple of days. It has increased the river's water level near Sangli from 18 feet at 8 am today to 24 feet by noon," he said.

The Kolhapur district, one of the worst hit by floods last month, also received heavy showers, leading to rise in the level of water in dams there and discharge in the
Panchganga river and its tributaries.

"Though the water level has not reached a warning level, the dam officials have been asked to keep a close watch and coordinate with senior officials before releasing the water into the river," he said. 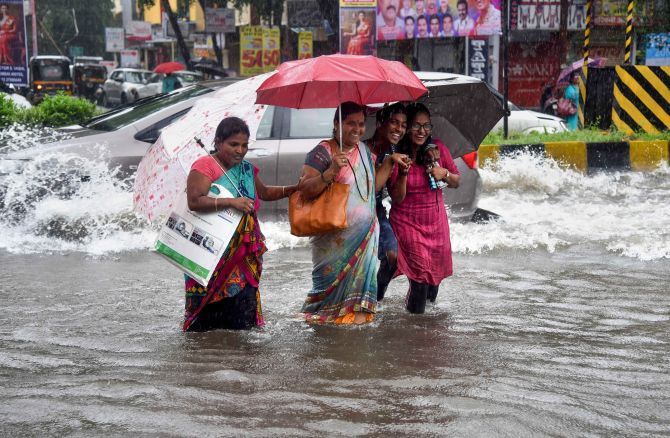 Heavy rains also pounded Gadchiroli and Gondia, where over 100 villages were cut off from other parts of the respective districts because of flooding on the key connecting roads, an official from Nagpur revenue division said.

Similarly, some remote villages in Ratnagiri and Sindhudurg districts were also cut off due to water-logging on roads, an official from the Konkan revenue division.

Besides, landslides were reported at Tamhini ghat in Raigad and Gaganbavda ghat, which connects Kolhapur and Sindhudurg, affecting vehicular movement, officials at the respective district collectorates said.

Source: PTI© Copyright 2021 PTI. All rights reserved. Republication or redistribution of PTI content, including by framing or similar means, is expressly prohibited without the prior written consent.
Related News: Mumbai, The India Meteorological Department, IMD, Dadar, Parel
SHARE THIS STORY
Print this article 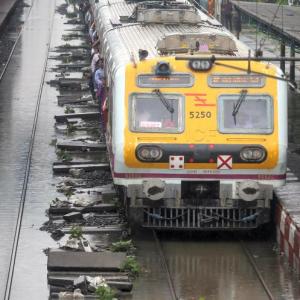