News
Business
Movies
Sports
Cricket
Get Ahead
Money Tips
Shopping
Sign in  |  Create a Rediffmail account
Rediff.com  » News » 'Not one rupee has come to states to fight COVID'

'The stimulus packages, sector reliefs, loans etc are coming to industry, but state governments have not got any money from GST, no money from excise, no money from any income source.' 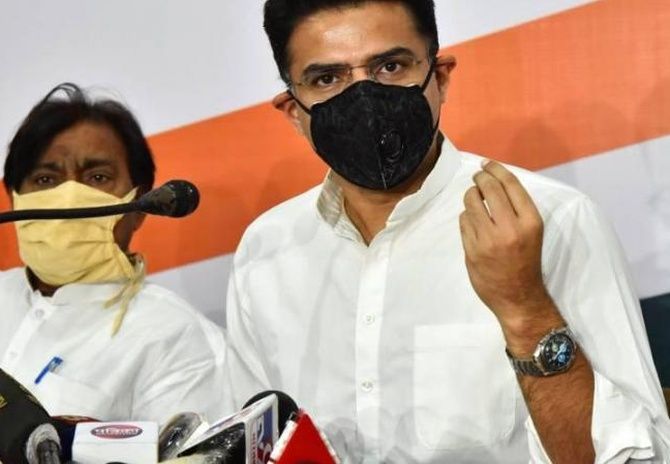 With 7,947 cases of coronavirus and 179 deaths as on May 28, Rajasthan has done reasonably well in containing the epidemic.

However, Deputy Chief Minister Sachin Pilot, who also heads the Rajasthan Congress party, believes the virus is not going away anytime soon.

In a conversation with Sheela Bhatt, Pilot shares his thoughts on how the battle against the pandemic has been fought nationally, and what could have been done differently. The first of a two-part interview:

What's your take on the pandemic?

Nobody was expecting this Covid-19 to reach Indian shores a few months ago, and people have said this before and I'm saying it again, on the 12th of February, Mr (Rahul) Gandhi did say that we must be prepared.

Unfortunately, as a country we didn't take cognisance of this until March. And when countries like the US, Italy, France, England were dealing with this problem, on a much larger scale, it is only then that we woke up.

Lockdown was an instrument for us to get time to build up capacities, to get resources, for our hospitals, medical equipment, ventilators, etc.

I think our approach was quite ad hoc. Because by having a lockdown their only purpose was to defer the infection rates so today we have more than one lakh infections.

It's true that for many reasons our recovery rate and our death rates are better than the international average but that does not mean that we've come out of the woods yet, so my own personal take is that the cost of having a lockdown has been quite substantial and unfortunately in India, with such a large population, 83% of all our workforce is in the unorganised sector.

Now despite the relaxation given to the lockdown and letting people work in factories is not the solution, the solution is to kickstart demand and consumption.

I am extremely sceptical and scared that the spread of Covid-19 has so far been limited to cities and towns.

God forbid it doesn't happen, but once it does spread into rural areas, we'll have a much much larger problem on our hands.;

How do you see it from a state capital, how has Indian federalism been at work through this crisis?

This was a great opportunity for us to show the world the great functional capacities of our federal structure.

That process did not happen as well as it should have happened. It is true that the prime minister announced a lockdown and everybody complied with it, but after the third phase of the lockdown, that's when the consultation started.

And now in the fourth phase, the state governments have been given the freedom to allocate green zone, orange zone and red zone, etc, that could have been done earlier. 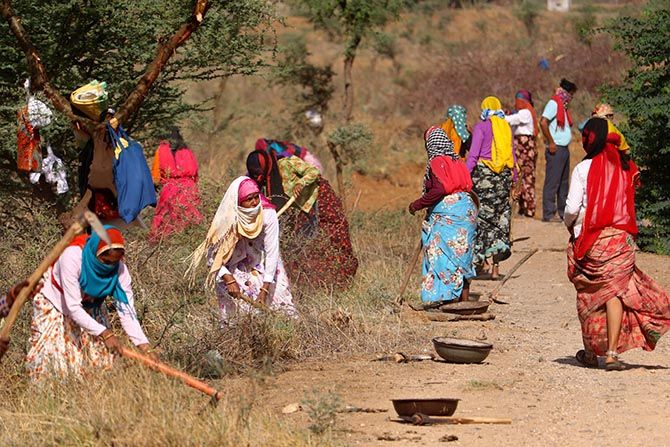 Isn't it that during the lockdown the states' capacity for testing etc increased?

So that happened because the fight against COVID-19 is not in New Delhi, no? It's happening in all cities and states.

It is the Rajasthan government that has to buy the ventilators, PPE kits, oxygen cylinders, enhance capacities for testing, increase beds in every district hospital, quarantine centres but who's footing the bill for that?

Not a single rupee has come to any state government as a state-specific fund to combat COVID-19.

The stimulus packages, sector reliefs, loans etc are coming to industry, but the state government has not got any money from GST, no money from excise, no money from any income source.

We have to increase spending on fighting COVID-19 and the fight against COVID-19 is not happening in New Delhi.

It is happening in different states, different towns, so the state government ka input liya lekin unka parinaam kya nikla? (state government's inputs were taken. but what was the end result?).

In my view, the federal reflection of our nature was there, but it could have been a few notches better.

Like for example, Kerala is a state, that has a Communist party government, it doesn't matter. But they, to my mind, have successfully dealt with it.

I mean, why is it that their best learnings and practices are not replicated in other parts? I know one shoe doesn't fit all, but I think at some level, this is a national crisis.

There should be a thinking among the people of India, that our politicians have risen above their ideological frameworks, are rising above electioneering and campaign, so you know this blame game and this government versus Opposition, this could have been put aside and all of us as political people would have come out looking better, if the people of India thought we're all fighting this together as one.

And it is in our nature to come together in times of crisis, we did come together and we have come together, but I still hear some noise about the Opposition, Congress, buses, you know, this government, that party -- that should and could have been avoided.

If you had a choice to decide, how would you have gone about it in March?

No, I think I would have better utilised the lockdown, I would have given more flexibility and headroom to governments to decide the lockdown. For example, Rajasthan was allowed to do MGNREGA activities after the second lockdown.

On the 18th of April, there were 62,000 people working in NREGA in Rajasthan. Today, 35 lakh people are engaged in MGNREGA.

Also, I believe in the stimulus package, in the announcement for financial incentives, we should have started first with migrant labour, farmers, BPL, destitutes, absolute impoverished people, in that order.

Hang on, if the Government of India can't feed its poor people for 50 days, why would factory owners pay salary for no work? 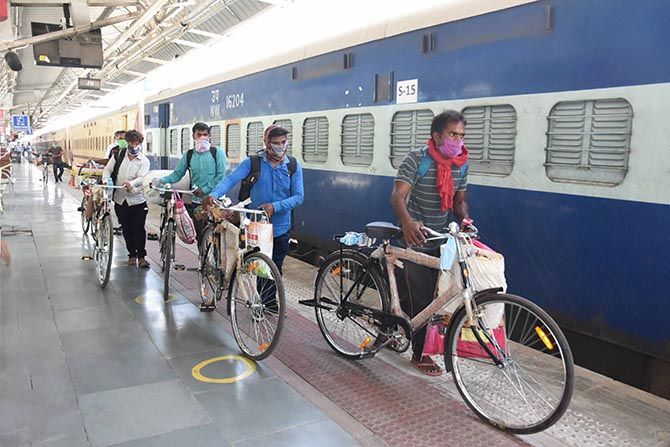 IMAGE: Migrant workers from Jharkhand at the railway station in Jodhpur, ready to board a special train for their native state. Photograph: PTI Photo

So why didn't the Rajasthan government feed its own poor for 50 days?

The money comes from the Government of India, na!

But you also have your own budget. And your system.

The Government of India owns Rs 17,000 crores outstanding before Covid-19, I didn't want to say this to you, and the states's share is not anyone's charity.

It is our right as citizens of India. So, there's where the federal policy should be much more transparent, the amounts of financial, state-specific funding hasn't been given to us.

So what is your view on this entire migrant issue and whom do you blame?

I don't blame anybody; I just think we could have handled this much better.

It is by making sure that from day one people were tested, isolated and transported in a very specific protocol that was issued by the government.

One national policy, no bickering, no tera mera. You make a policy, whoever wants to stay can stay and the rest can be helped in transportation.

Nobody thought of it in the Government of India when they announced the lockdown, that people would gathered at Delhi in Anand Vihar.

No one anticipated that they would want to go back home. But when people lose jobs, no home, no food, they'll want to go back, it's a natural human instinct. Nobody planned that out.

If after announcement of the lockdown the government had addressed the poor people, helped them migrate, arranged their food by giving them money, then there would not have been an exodus.

But what did you give migrant labourers?

Every government, across the world, is giving cash to people. Unless you give people money in their hands they will not have the confidence to stay where they are. In panic they would like to rush back home, but you closed down transport.

So, the tragedy struck.

If the Centre failed, in that case why did the states not do enough for them?

Nobody was listening in Delhi.

You don't understand, when there is a lockdown, no trains, no buses are plying, and state borders are sealed, what is the state government supposed to do?

We kept the camps, we gave them food.

Then what was the problem?

Because if someone has a desire to go back home, it is their right. You can't stop them. 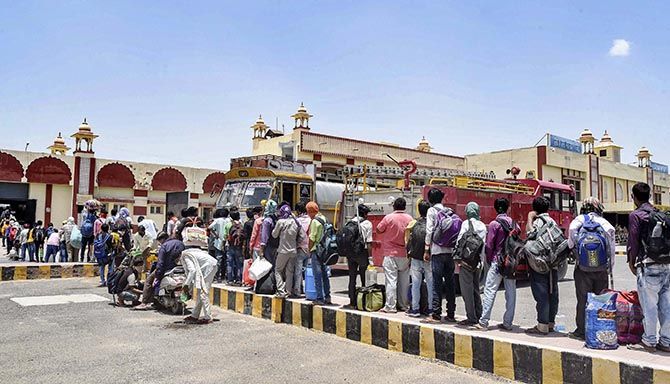 IMAGE: Migrants stand in a queue at Lalgarh junction in Bikaner to board a special train to Bihar. Photograph: PTI Photo

But I think you are asking a very twisted question, Sheelaji, because you are saying the Government of India gives you no money, states have no revenues, incomes have dried up, we have to fight COVID-19 on our own resources and yet we have to keep them that happy?

We've fed them when there is no money in their bank accounts.

If a student wants to go back from Kota you are allowing them, but when the migrant labour wants to, you are saying they can't go back.

Borders are sealed, trains and buses are not plying. How do I send them back?

And do I have the capacity to give money to every labour as the state government even though they are from Maharashtra, Bengal and Odisha?

This was the work of Government of India; they should have owned it up.

They should have stepped forward and they should not have delayed in announcing the amount of stimulus package.

Surely, not lakhs would have started walking. Now, those who have left their workplaces won't return.

There were lobbies in Gujarat and Karnataka who wanted the government to not allow migrants to leave the states in fear of labour shortage.

But I have, in my state 35 lakhs working in MGNREGA. I have said anybody who comes back to Rajasthan, they'll come back jobless, they'll come back poor, so we'll give them a job card and they'll work under MGNREGA, at least the unskilled labour. So they have some sustenance. We have increased the daily rate to Rs 220.

So you are saying that since a migrant policy was not announced, and it got delayed, that resulted in the chaos?

There was no policy at all. No one thought of it.

There were no set protocols or procedures for state governments to act in a certain way, there was no coordination, and there was no vision of how to plan it out.

The Government of India has tremendous resources. If special trains can ply today, when the infection is above one lakh, when infection was around 500, it would have been safer to send them home.