On all key issues, Congress is MIA, sighs Shekhar Gupta. 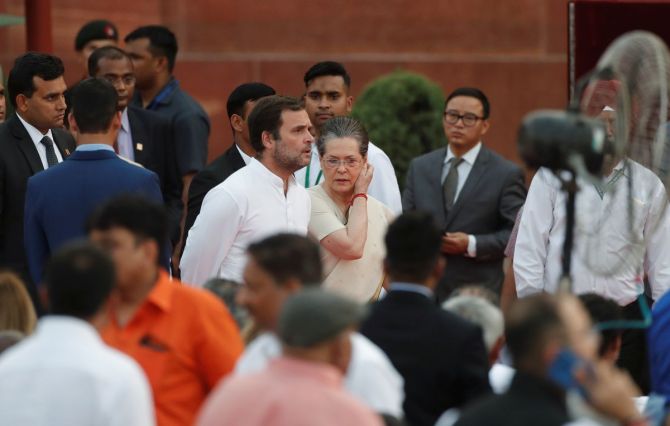 Much debate has been over whether journalists can risk saying something the Modi government doesn't like.

Media has obviously risen so high in the government's threat perceptions that even in the second half of June that a group of nine important ministers was holding a flurry of meetings on how to counter this terrible menace.

This is exactly when the Galwan clash (June 15) had created a war-like situation with China, tens of thousands of migrants were walking back home and India's coronavirus graph was going up, like a hockey stick.

If you read the 'leaked' document that is supposedly the report produced by the GoM here, it would actually hold out no particular threats, except probably the prospect of being colour-coded, and with the 'wrong' colours.

Whether that would imply visits by CBI, ED and any other such, you don't expect any document to say so.

If you were an incorrigible optimist like me, you'd even say, wonderful, we journalists are so important half the Cabinet is obsessing over us during a pandemic and a near-war.

So, thank you very much, count your blessings.

It is always hazardous questioning a government, irrespective of the party in power.

Which, you might again say, is a part of our lives.

Plus, there is always the option of taking a bleach-bath and painting yourselves in 'friendlier' colours.

Damned if you call out the government, but also cursed if you question the Opposition.

Hello, is this the main responsibility of a free press, attacking not the government but the Opposition?

For months now, I have been so fearful of drawing this, the underdog's fire, that I haven't written much critical of, or even vaguely negative about the Congress party or Rahul Gandhi.

Even while it has continued to decline, sleep-walk and decline week after week.

I am now walking into that minefield with this question: We can keep complaining about the undermining of institutions, misuse of the 'agencies', sectarian and socially discriminatory laws, use of provisions like sedition as if it was a parking ticket, rail-roading of legislations through Parliament, even a GoM activity like this one on the media.

In a democracy, the primary accountability of respecting institutions, citizen's liberty and Constitutional guarantees lies with the ruling party.

But it is also the primary responsibility of the Opposition to fight for these.

For this, it is also the responsibility of the Opposition to build its strength and not even fritter away what it inherited.

That's how Opposition parties of the past, from the Lohiaites to Jana Sangh, the BJP and the Left, made their mark during the decades of Congress domination.

In fact, even after the 1984 election when Rajiv Gandhi swept the polls and jokingly (and half-contemptuously) declared that 'We have declared the 10+2+3 system for the Opposition', its wounded leaders were back in the ring within months, on their feet and ready for the fight again.

That reference, of course, was to the Janata Party, BJP and the Lok Dal seats, 10, 2 and 3, respectively.

By the latter half of 1985, that is within a year of Rajiv Gandhi's 415 Lok Sabha seats, the Opposition was at his throat, on issues ranging from the Shah Bano case to the Mandal Commission.

Later, when he tried to smother the media with his infamous 'anti-defamation bill', the Opposition, especially the BJP, found a worthy and low-cost/high-reward cause in protecting press freedoms.

Check the history of The Indian Express, the foremost victim of the Rajiv government's vindictiveness.

When Congress goons hijacked its employees' union, called a strike and threatened to shut down the paper, the BJP and the RSS not merely protested, but also sent in hordes of volunteers to help keep the presses running.

Today, you have an odd situation where the government plans to colour-code you, and the Opposition, especially the Congress, spits on you. 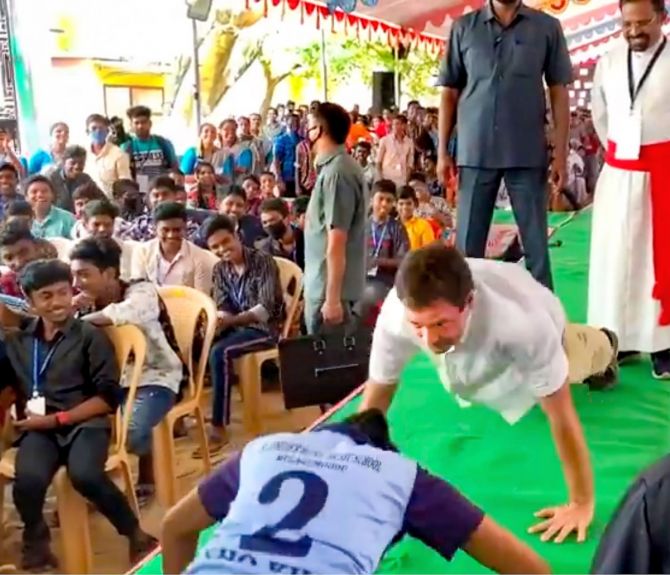 In a manner of speaking, if the ruling party's sins in this case are of commission, the Opposition's are sins of omission.

On all key issues, from unemployment to rising fuel prices, to undermining of the institutions to attacks on minorities and free speech, they are MIA, Missing in Action.

In a comparable situation, the BJP, with just two seats in Rajiv Gandhi's Lok Sabha, would fill up Jantar Mantar every other day with protestors.

What broke my caution over questioning the opposition was the flurry of pictures from Kerala.

These had Rahul Gandhi swimming with fishermen, his party loyalists in breathless raptures over his six-packs, his perfect push-ups and indeed, even with just one arm.

All these moments were so viral-worthy.

Whether they were vote-worthy, dare we even ask?

Think then, about the de facto chief of our largest Opposition party, with still 51 members in the Lok Sabha and the control of three major states, heading for election in another four states and one UT, in each one of which his party has a stake.

And here he was, showing off his phenomenal fitness to school children.

I would never trivialise school children, I know how hard they are to impress.

But, for a 50 year old to dazzle them with his muscle power?

All of this while his party was meanwhile setting itself on fire.

The so-called G-23 was meeting in Jammu raising questions, a senior party-man, former Cabinet member and family loyalist, Anand Sharma, was raising ideological questions about the choice of alliance partners in the assembly election.

Amarinder Singh, his most powerful chief minister, was sliding into that dangerous zone when a government begins to lose leverage on the biggest issue of the day, farmers' protests in his case, despite enjoying a massive majority.

It is a matter of time before either he will lose his political capital or, I say it at the risk of stinging denials from him, check out his options.

Rahul's party has carried on without a regular president to relieve his ailing mother, since he resigned taking responsibility for the 2019 defeat.

There is no election in sight.

And the answer to that question, as we heard, is a counter-question: How come nobody asks the BJP why they don't hold party elections? Good question, but at least they have a president.

In the past 25 years, since the Gandhis returned to reclaim the party, the BJP has had nine presidents.

Three of them, Amit Anilchandra Shah, Rajnath Singh and Nitin Gadkari serve in this Cabinet.

A fourth, L K Advani is in the Margdarshak Mandal. 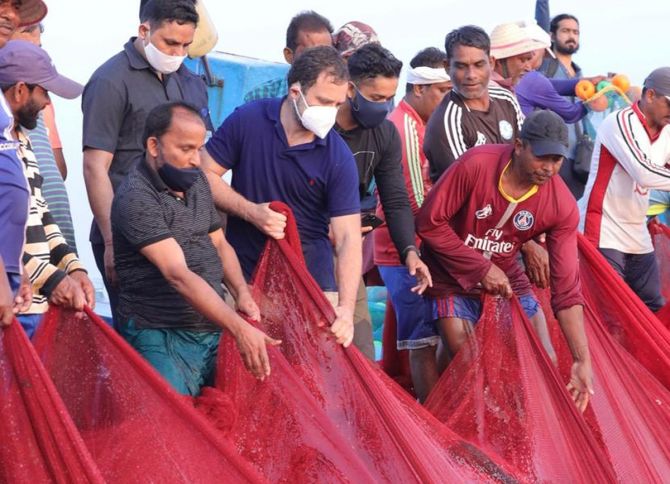 I know the answers to these points.

What do these G-23 wallahs count for? Can they win one seat anywhere? All they want is the Rajya Sabha or such sinecures even when out of power.

Who else can be party president and keep it united?

Who else in the country has Rahul Gandhi's forthright opposition to the BJP and RSS?

But then you run into the same cul-de-sac: Why isn't he then the party president, can a party survive like this forget rebuilding, how long before more Jyotiraditya Scindias walk away in frustration, how will you stop other parties, from Sharad Pawar's NCP to Arvind Kejriwal's AAP from vacuum cleaning your leftover vote?

Those joyful, viral visuals from the ever-so-cool Kerala brought back to me a line from the 1974 Dilip Kumar-Saira Banu film, Sagina.

Lyricist Majrooh Sultanpuri had no idea he was writing a line that would fit so perfectly with the Rahul Gandhi-Congress party situation: Aag lagi hum ri jhopadiya mein, hum gawain malhar/dekh bhai kitne tamashe ki, zindagani hamaar (my hut is on fire, but I am singing malhar, the happy rain raga/see what fun my life is).

Sorry, Majrooh sahib, I stole this. But no sorry Rahul Gandhi. This was written for you. 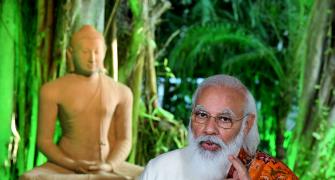