There is growing talk of a realignment of forces in Maharashtra after May 2 when the results of West Bengal and other four states would be in, notes Virendra Kapoor. 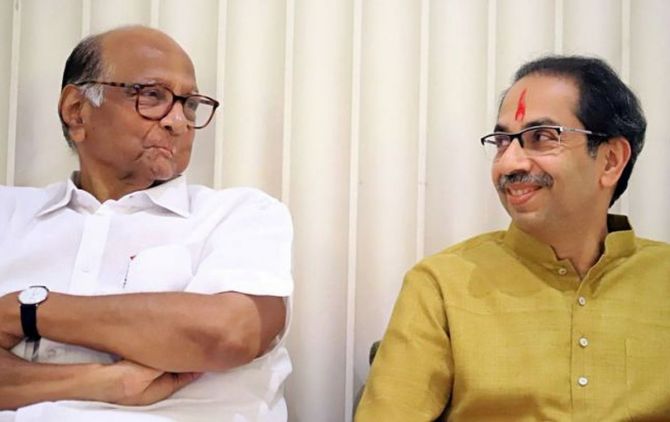 With each passing day, it seems to be getting harder for the Maha Vikas Aghadi government in Maharashtra to brazen out the fall-out of the bomb scare near Mukesh Ambani's home.

It is not clear why the explosives-laden vehicle was parked outside the house of Asia's richest man.

Regrettably, though the National Investigation Agency has revealed a lot about the ongoing investigation, not a word has been said about the motive.

Anyone familiar with criminal jurisprudence would know that motive is important to establish the guilt of an accused. In its absence, all manner of speculation has gained ground.

From what we already know, it is clear that the brazen misadventure has shaken the ruling three-party coalition in Maharashtra to its very roots.

Some heads in the Mumbai police have already rolled. More might do so in the coming days.

But it is in the ruling alliance that the turmoil has sent shock waves and threatens to tear it asunder.

Thanks to the investigation, distrust between the Shiv Sena and the Nationalist Congress Party has begun to take a toll on the Maha Vikas Aghadi's capability to present a united front and to offer a modicum of good governance at a time when the state is yet again in the throes of the coronavirus pandemic.

Just as former home minister Anil Deshmukh lost the effort to stop the CBI from conducting a preliminary inquiry into former Mumbai police commissioner Param Bir Singh's charge of his demanding Rs 100 crore (Rs 1 billion) a month, with the Supreme Court declining to stay the Mumbai high court order, the focus was shifted to another letter bomb.

The disgraced Assistant Police Inspector Sachin Waze's four-page letter to the NIA court is no less damaging for the Maharashtra government.

Waze has claimed that Shiv Sena Transport Minister Anil Parab asked him to close the preliminary inquiry against a trust after seeking Rs 50 crores (Rs 500 million) as a bribe.

Waze also alleged that Parab asked him to collect Rs 2 crores (Rs 20 million) each from 50 contractors of the Brihanmumbai Municipal Corporation and close inquiries about their dealings.

The BMC is the richest local body in the country with fixed deposits alone of Rs 60,000 crores (Rs 600 billion).

Predictably, Parab rubbished the charges. He said as a lifelong 'devotee' of Balasaheb Thackeray he set a great store by integrity.

Multiple sums of Rs 100 crores from Mumbai alone give the impression that the commercial capital of India is a cash cow for policemen and politicians alike.

With so much of illicit money sloshing around in Mumbai alone, it provides an inkling about the gargantuan loot that may be going in the rest of the State.

Meanwhile, a departmental inquiry has been ordered against Param Bir Singh. He will now have to answer why he reinstated Waze who had quit the police following suspension in a custodial death case.

And, having reinstated him, why did he assign him a key post in the Mumbai police's crime branch?

Why did he directly deal with the junior officer cutting out several higher layers in the uniformed force?

Whether or not the MVA lasts in power, the collapse of the police and civil administration in the once well-administered Maharashtra is a matter of concern.

Meanwhile, there is speculation about Pawar's next move.

The NCP denied that Pawar went to Ahmedabad, stayed overnight at the home of a prominent industrialist who is widely believed to be close to the Modi government.

And it is here that Pawar and NCP leader Praful Patel reportedly met Amit Shah who, when asked, neither confirmed nor denied the meeting.

After he joined hands with the Shiv Sena it was believed that Pawar would be the sutradhar of the coalition of incompatibles.

But from the way most embarrassing events have unfolded, it seems the Maratha leader has lost his deft touch.

At 80, and in poor health, Pawar certainly does not want to suffer further ignominy.

Parting ways with the Shiv Sena may help him retrieve some of his old elan.

Hence, the growing talk of a realignment of forces in Maharashtra after May 2 when the results of West Bengal and other four states would be in. 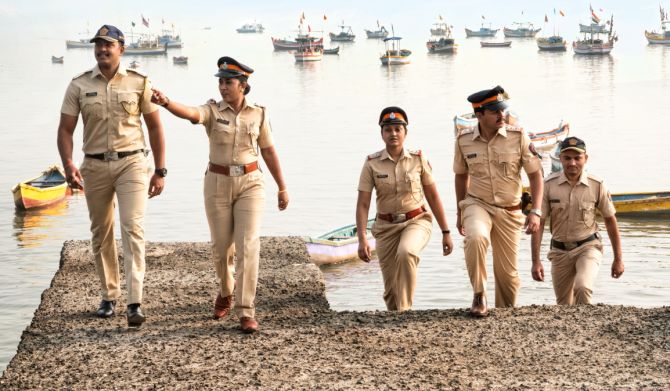