Everything can't be made public: Shah on meeting Sharad Pawar

Union Home Minister and senior Bharatiya Janata Party leader Amit Shah on Sunday exuded confidence that his party will win 26 out of the 30 West Bengal seats and more than 37 of the 47 Assam seats which went to polls in the first phase of assembly elections in these states on Saturday. 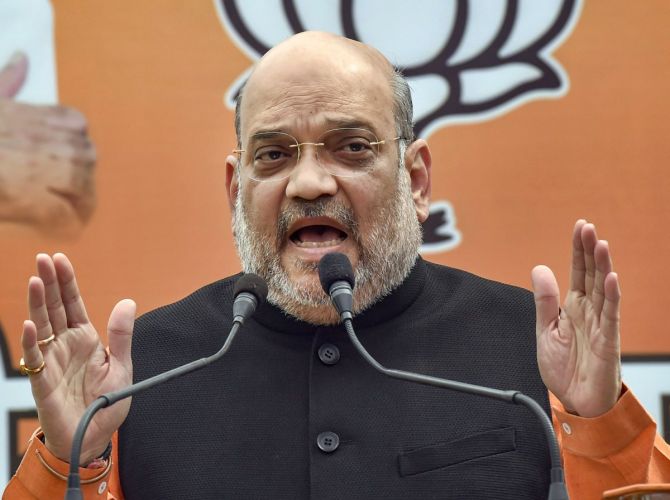 Citing the internal party feedback that he has received, Shah claimed that the BJP is on course to achieve its target of winning over 200 seats in the 294-member West Bengal assembly and improving its alliance tally of 86 seats in the 126-member Assam assembly, and asserted that people have voted for the "positive" agenda espoused by the party.

Addressing a press conference, Shah also rejected West Bengal Chief Minister Mamata Banerjee's charge that Prime Minister Narendra Modi's visit to a temple of the Matua community -- which is in sizeable number in the state -- during his trip to Bangladesh violated the poll code.

He said that the visit had nothing to do with the elections and was aimed at fostering deeper ties between the two countries.

Shah also parried a query about reports that he might have met leaders of the Nationalist Congress Party, which is a key constituent of the opposition-run government in Maharashtra, saying everything cannot be made public.

He said that peaceful polling in Assam and West Bengal and high voter turnouts are positive signs for the two states, noting that West Bengal often witnessed violence during polls held earlier.

The home minister lauded the Election Commission for the violence-free polls.

Targeting the ruling Trinamool Congress in West Bengal, he said an atmosphere of appeasement and an euphemism for alleged pro-Muslim policies have prevailed in the state and illegal immigrants were allowed uninhibited while public funds were misappropriated and development plunged.

People had high hopes but only the name of the ruling party changed while the state slid further, he said referring to the TMC ousting the Left from power in 2011.

The state has now embraced the development agenda for 'Sonar Bangla' espoused by Modi, Shah said, noting that it has seen such an election after years when there was no violence or any order of a re-poll in any place.

"We will win 26 seats in the first phase and succeed in bagging over 200 seats," he said, citing the feedback he has received from BJP leaders involved in the campaign.

Asked about a purported telephonic conversation Banerjee had with a BJP leader, who was earlier in her party, to woo him back to her fold, Shah said everyone has a right to solicit support.

The home minister hit out at the TMC after it released an audio in which BJP vice president Mukul Roy is allegedly telling industrialist and party leader Shishir Bajoria about their approach to the Election Commission, saying this shows that phones of opposition leaders were being tapped in the state.

Is this a democratic practice, he asked.

Shah asserted that there is nothing incriminating in that conversation as the BJP has given in writing to the poll watchdog what the two leaders were heard discussing.

He also appealed to voters of Nandigram, where Banerjee is locked in a high profile contest with her former protegee and BJP candidate Suvendu Adhikari, to support his party, saying they can bring about a change for better in the state by their votes.

On Assam, Shah said, it is clear that people have voted for the BJP whose government has taken the state on the road of development by making it free of violence and agitation, and has now promised to make it flood-free.

Under Modi's leadership, Chief Minister Sarbananda Sonowal and his senior ministerial colleague Himanta Biswa Sarma have ushered in a lot of development which has been drawing people's support.

To a question about certain media reports that the TMC may be slightly ahead in Bengal, he said similar predictions were made about assembly polls in other states, including Uttar Pradesh, where the BJP had decimated the opposition by winning 312 seats in the 403-member assembly.

The first phase of polls in Bengal had over 84 per cent turn out while it was 79 per cent in Assam.