Time for police to act against offensive WhatsApp groups

Why has Mumbai's cyber police taken no action against these WhatsApp groups who everyday, commit offences under the Indian Penal Code?
The police cannot be unaware of their existence, observes Shruthi Marathe. 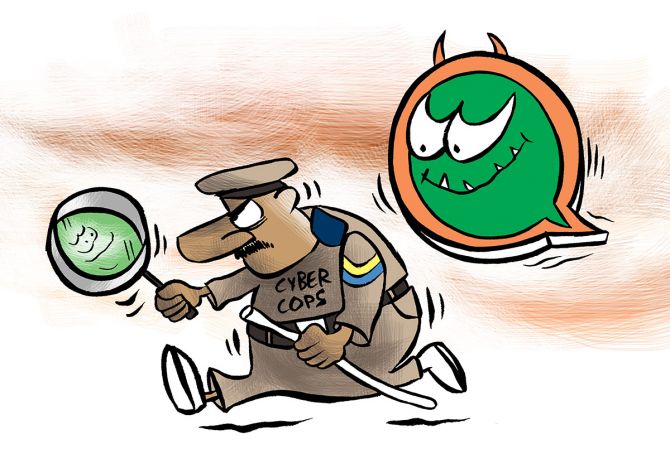 How many Mumbaikars will the Shiv Sena beat up for forwarding WhatsApp messages insulting to Maharashtra Chief Minister Uddhav Thackeray?

WhatsApp groups supportive of the Bharatiya Janata Party churn out such cartoons every day.

Secularists may have approach the court to prevent Sudarshan TV from telecasting its 'UPSC jehad' programme.

Even though they succeeded, the programme's message had already reached thousands of members of WhatsApp groups which have been spinning the 'UPSC Jehad' conspiracy theory for the past few months.

So also, the communalisation of Sushant Singh Rajput's suicide is only an extension of the way the tragedy has been projected by these groups right from the start: As a Hindu-Muslim issue.

Run by BJP supporters, WhatsApp groups played a huge role in winning UP for the BJP in the 2017 assembly election.

In Mumbai, they sprouted up in a big way a few months before last year's Lok Sabha election.

Every suburb had its own group with its own admin. Invitations were sent out en masse for people to join.

Promoting Modi as PM was the raison d'etre of these groups, but very soon it became clear that propagating the achievements of the BJP government at the Centre and states was only one of their functions.

The other was to spread hatred, often using misleading photographs and videos and even downright lies, against the party's usual targets: Muslims and Islam, Jawaharlal Nehru, Mahatma Gandhi, the Congress, the Gandhi family, with Rahul as the special butt of jokes, Opposition leaders Mamata Banerjee and Arvind Kejriwal, Christians, and, of course, secular Hindus.

Freedom fighter and India's first education minister Maulana Azad is a new addition to these targets.

After Modi swept the Lok Sabha polls, these groups continued, with some of them changing their name to 'PM Modi 2024' or 'Nation with NaMo'. But apart from the name, nothing changed.

After the lockdown began and Delhi's Nizamuddin Markaz shot into the news, these groups were flooded with messages branding the entire Muslim community as 'Corona jehadis', using fake videos of Muslim vendors contaminating foodstuffs sold by them.

The groups fell silent mid-April, after the Mumbai police warned of action against misleading messages about the coronavirus and messages spreading communal enmity.

But a month later, they were back. One of the first messages that signaled their return linked 'Corona' with 'Quran' and 'Sanitizer' with 'Sanatani'.

Initially, these groups said the young actor was driven to suicide by those who, according to them, dominated Bollywood: The Khans, with Karan Johar and Aditya Chopra being part of the 'gang'.

Somewhere along the way, wild charges were made about state Minister Aditya Thackeray's role, and the Mumbai police's alleged cover-up of that. 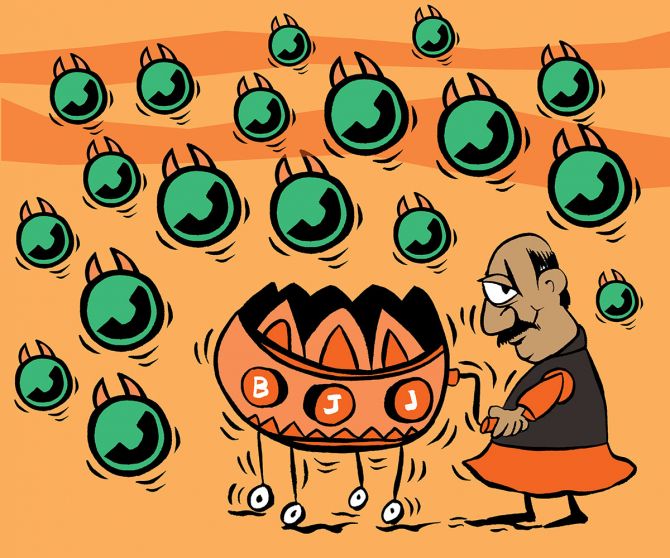 Soon, the 'Muslim-loving' Mahesh Bhatt made an appearance; he was supposed to have instigated Rhea Chakraborty. Currently, fugitive gangster Dawood Ibrahim is supposed to be the kingpin of the gang that 'killed' Rajput.

These groups's rants against Bollywood are reminiscent of the rage Trump followers feel against Hollywood.

But here, the communal angle makes the rage more than just moralistic indignation against the hedonistic lifestyle of film stars.

A long message posted on one of the groups explains their deep-seated resentment against the Hindi film industry.

The writer rages that Hindi films show Muslim and Christian priests as devout, but sadhus as cheats and oppressors; Muslims are shown as patriots while Hindus as traitors; bhajans are avoided but songs about 'Ali Moula' abound.

'After years of seeing this, we have reached the limits of our tolerance,' says the message.

This description is only half-true.

Benign portrayals of Muslims were indeed common in Hindi films, but that was more than a generation ago.

Starting from the late 1990s, Muslims began to be portrayed as terrorists quite often: Films such as Sarfarosh, Aamir, A Wednesday come to mind immediately.

As for Christians, even in the 1960s and 1970s, the avuncular pastor was as common a character as was the drunken 'Johnny', or 'auntie', who was often a bootlegger, or at best, a garage mechanic.

Christians, in fact, used to take offence at such stereotyping.

As for avoiding bhajans: Hindi film bhajans have for years succeeded in eliminating all other forms of devotional music on religious occasions.

But past grudges based on half-truths are the usual weapons used by these groups to convince Hindus that despite being the majority, they have always been persecuted.

However now, says this message, the majority has awoken, and hence the 'award wapasi gang, urban Naxals, Khangressis and Memuna (Mamta Banerjee), leftists and the lustful (vaami, kaami)', are all afraid that they too will be exposed.

These groups may talk about the Khans dominating Bollywood, but their rage is reserved for one Khan: Aamir Khan, who had spoken out in 2015 after the first mob lynching of Akhlaq in Dadri.

Aamir's meeting with Turkish President Erdogan's wife on a recent professional trip to Turkey is being projected as an act of treason, because Erdogan has criticised the Indian government on Kashmir and its treatment of Muslims.

Any number of photographs showing Aamir Khan with Arabs -- wrongly identified as terrorists -- have been circulated on these groups.

Another target of the vilest abuse is Naseeruddin Shah, who has more than once, attacked the Centre's policies.

At the other end of the spectrum are the two celebrities who have emerged as Hindutva icons for these groups: Kangana Ranaut and Arnab Goswami.

The groups's members are beside themselves with joy at the continuous baiting of Uddhav Thackeray by Ranaut and Goswami.

Seen as having betrayed the legacy of his father Bal Thackeray, the Maharashtra CM is, after Rahul Gandhi, the butt of the maximum number of jokes.

Sometimes, the fanaticism of these groups spares not even the BJP. 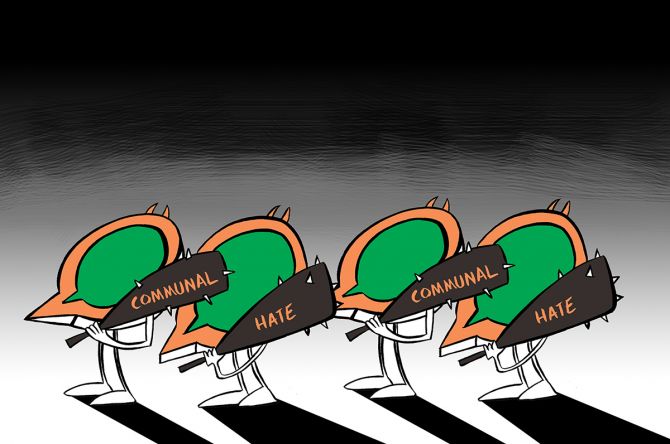 About three months ago, one message had drawn the attention of group members to the scheme run by the minority affairs ministry for IAS training for minorities.

One Sunday, a tweet by one Prof Hari Om whose handle is '@Dostkhan_Jammu' was posted on these groups, warning Hindus that soon, they would be out of the civil services thanks to Minority Affairs Minister Mukhtar Naqvi 'working overtime to replace Hindus'.

This comes on the heels of false allegations made in these groups against the Zakaat Foundation of India which has been training Muslims free for the civil services.

The subject 'Islamic Studies' must be removed from the UPSC syllabus, say these groups, because it helps Muslims score better than Hindus.

It should be mentioned here that Muslims, who comprise 14% of India's population, make up barely 5% of the civil services.

Why has the Mumbai's cyber police taken no action against these WhatsApp groups, who everyday, commit offences under the Indian Penal Code's Sections 153 A (promoting communal enmity) and 295A (hurting religious sentiments)?

The police cannot be unaware of their existence.

Are they waiting for complaints? Those may never come, for if at all members do find some of the messages offensive, they may be unwilling to risk offending the politically well-connected people who run these groups.

Are Mumbai's cyber cops also unwilling to take this risk? 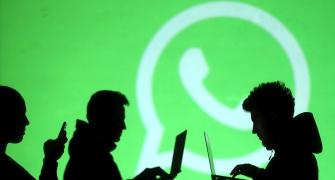 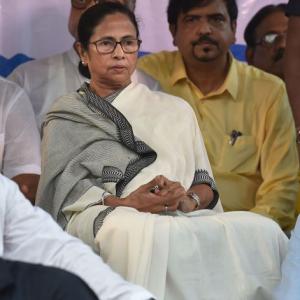