News
Business
Movies
Sports
Cricket
Get Ahead
Money Tips
Shopping
Sign in  |  Create a Rediffmail account
Rediff.com  » News » Why do sections of the media demonise Muslims? 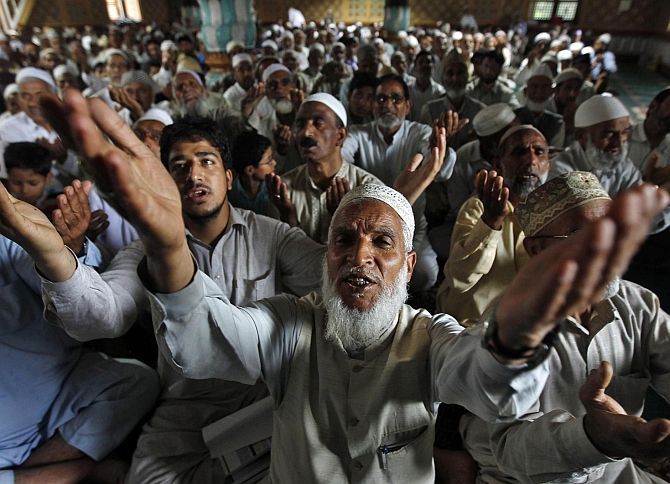 In 2011, when the newly appointed chairman of the Press Council of India Justice Markandeya Katju, spoke of the need for a 'danda' to discipline 'incorrigible' media offenders, the entire media erupted at this attempt to curb 'freedom of expression.'

The retired Supreme Court judge classified three kinds of 'anti-people'; acts the media indulged in. One of these was the way it deliberately divided people on religious lines.

When Justice Katju gave this controversial interview in November 2011, the country had lived through the worst terror attacks. Be it Mumbai or Malegaon, Ajmer or Pune, Bengaluru or Ahmedabad, Muslims had immediately been blamed by the police, and the media had parroted the police version.

The retired judge described this media practice as an attempt to demonise the entire community as terrorists.

The interview was not just an angry outburst. Justice Katju refused to withdraw his remarks even at the first meeting of the newly-constituted PCI, leading to an angry walkout by four publishers.

Two years later, he repeated that the media was fanning communalism.

Justice Katju's term ended in 2014. In the five years since, sections of the electronic media have gone to unimaginable lengths to demonise Muslims.

A particularly graphic example of this was a programme telecast recently by a leading Hindi news channel.

The topic of the programme was a multi-crore land scam unearthed by the CAG that involved regularizing encroachments on government land in Jammu.

Such regularizations of unauthorised structures have happened many times before, the most glaring example being in the suburb of Ulhasnagar, (extneral link) near Mumbai.

But the Jammu scam was projected as a 'land jihad', waged by the three mainstream Kashmiri parties that had ruled the state.

Both Hindu and Muslim VIPs figured in the scam, but because 90% of the encroachers were Muslim, the scam was portrayed as a conspiracy to change the demography of Hindu-majority Jammu at the behest of Pakistan, so that its jihadis could cross over the border easily.

1.'News will not be designed to promote any particular opinion' and

2. 'ensuring that controversial subjects are fairly presented, with time being allotted fairly to each point of view.'

The programme allotted time only to those who saw the scam as a planned 'Islamisation of Jammu'. Among them was advocate Ankur Sharma who had gone to court after the CAG report had exposed the scam.

Head of a Hindutva organisation, Sharma had defended some of those convicted for the 2018 Kathua gang rape and murder of an eight-year-old Bakerwal Muslim girl.

Others interviewed included Kashmiri Hindu writers who saw the Kashmir militancy as a 'continuation of the struggle in India for an independent Muslim homeland'.

The programme also violated the first guideline, because it was designed to promote only one opinion: viz, this 'zameen ka dharm parivartan' was part of the various kinds of jihad being waged -- by terrorists, the tukde tukde gang, Opposition parties, and 'designer patrakars'.

From the 8th century invasion of Sind by Mohammed Bin Qasim to Shaheen Bagh and the Delhi riots -- all were portrayed as part of the same jihad.

If at all such a view could be taken seriously, what could have been the reaction of such a programme on Hindu viewers?

And what would Muslims have felt, watching it?

For years now, Muslims have been angry at the negative portrayal of them as a community in the non-Urdu media. Sympathetic journalists would advise them to convey their objections through letters to the editor and even to take delegations to meet editors.

But what should they do when the editor-in-chief of a television channel himself anchors a programme that portrays them as threats to the country's security?

How do they handle the way incidents are deliberately communalized by not one, but many leading television channels?

Be it the 2017 Hadiya case, where the Supreme Court agreed to indulge a father angered by the conversion of his adult daughter and her subsequent marriage to a Muslim; or the murders of Delhi residents Ankit Saxena (2018) and Dhruv Tyagi (2019) by their Muslim neighbours, leading channels, both Hindi and English, used these incidents to project Hindus and Muslims as enemies.

They didn't stop there.

They went on to project Muslims as ISIS-inspired fanatics, and castigate Opposition parties, specially the CPI-M and Arvind Kejriwal, for playing 'vote bank politics' and ignoring Hindus.

In fact, the Delhi CM's office wrote to one of the channels, asking for an apology for its 'deliberate and malicious attempt to communalise and distort facts'.

So poisonous were these programmes that even BJP spokespersons participating in them urged the anchors to stop distorting facts to achieve TRPs.

Isn't this exactly what leading lights of the ruling party at the Centre do at every opportunity? Indeed, on two issues: 'Appeasement' of Muslims, and conversion to Islam, these programmes have echoed Hindutva beliefs.

As PCI chairman, Justice Katju had wondered whether the freedom of the press included the freedom to spread communalism. Alas! In India it does.

But though the danda he wanted was never made part of the powers of either the Press Council or the News Broadcasting Standards Authority, viewers need not remain helpless.

But complaints to the News Broadcasting Standards Authority against violations of their Code of Ethics can yield apologies.

Even more effective are defamation suits, (external link) like this one, filed by the woman who helped Hadiya.

There is one more way, shown ironically, by the government itself.

The I and B ministry recently used a rule of the Cable TV Network Act to ban two Malayalam news channels for 48 hours for their 'biased' coverage of the Delhi riots (the ban was hastily revoked). The rule forbids programmes from promoting communal attitudes.

A conscientious citizen has now issued notice (external link) to the I & B ministry regarding the 'land jihad' programme, using this very rule.

What can be better than the fact that this citizen is a Hindu?