'Those who have followed politics even when there was no Twitter know what the word 'jumlebaaz' means,' says Utkarsh Mishra. I never knew our prime minister gets so angry when he is restrained from doing what he knows, and does, the best -- giving bhashan.

A little of the usual pandemonium by the Opposition in the Lok Sabha on Wednesday, February 7, that disrupted his speech on the motion of thanks to the President's address led to the PM, in apparent disgust, forget that he was speaking on the floor of the august House and not addressing an election rally.

Whatever he studied about Indian politics and history while pursuing a course in 'Entire Political Science' (that's the name of the subject his degree bears), the pracharak in him seems to have got the better of him, in rage.

And, he started passing off WhatsApp forwards as facts.

Beginning with 'If Sardar Patel were the first PM, all of Kashmir would have been ours' to '12 of 15 Congress committees chose Patel for PM, but Nehru got the leadership'.

He even told the Opposition that 'it only has the right to protest and not to disrupt'. (So during the UPA days, the BJP's protests in the House were all Arun Jaitley's fault. Narendra D Modi never wanted Parliament to be disrupted.)

Thankfully he stopped at that and didn't go as far as members of his party's IT cell go.

But unlike at election rallies -- where one can get away after accusing a former PM and a former army chief of hatching a conspiracy against the party in power -- making statements based on wrongly interpreted historical information and hearsay in Parliament legitimises them to a great extent.

And the PM did just this last Wednesday.

In a pursuit to set the tone and tenor of his campaign for the 2019 Lok Sabha election, the PM ended up giving legitimacy to something which cannot be sufficiently backed by facts and evidence.

That mysterious tale of the Congress' 1946 internal elections

It seems that every other Nehru-hater I meet has been told this story differently, and no one seems to know what really happened and why.

This is what the PM told Lok Sabha last Wednesday:

'When Congress held elections (internal elections before Independence) for leadership in the country, 12 out of 15 Congress committees chose Sardar Vallabhbhai Patel, 3 chose NOTA. Yet the leadership wasn't given to him (Patel), and Nehru was given the post.'

He didn't ask, 'Why was Nehru given the leadership and who gave it to him?' Because he was narrating it in a bid to sully Nehru and 'expose the injustice meted out' to Sardar Patel, he steered clear of mentioning Mahatma Gandhi's decisive role in selecting Nehru.

If he had done so, he would have been the first PM to accuse the Father of the Nation of ulterior motives in India's Parliament. (But doesn't he love the phrase 'the first PM in history to...'? :)))

However, he already has become the first PM to demolish Nehru in the House, going to the extent to say that 'he didn't give us democracy, it was always in our culture'.

How can someone, who claims to take pride in India's rich history and ancient culture, say that a land of hundreds of kingdoms, ruled by kings and queens and emperors, managed by feudal lords, who changed policies on whims and fancies, was always democratic!

Anyway, returning to the Nehru-Patel debate, one does find references in several books that while provincial Congress committees wanted Patel to take over as Congress president in 1946, succeeding Maulana Azad, Gandhi wanted Nehru back in the role.

Durga Das writes in his memoir that Gandhi preferred Nehru over Patel to succeed Azad because he thought Nehru would be 'a better instrument to deal with the Englishmen' at that crucial time.

When Das asked Acharya J B Kriplani about the episode later, the latter replied, 'I knew Gandhiji wanted Jawaharlal to be the president for a year, and I made a proposal myself saying "some Delhi fellows want Jawaharlal's name". I circulated it to the members of the working committee to get their endorsement. I played that mischief. I am to blame. Patel never forgave me for that.'

When Das asked Gandhiji about it, he agreed that 'though Sardar would have been a better negotiator and organiser as Congress president, Jawahar should head the government'.

When asked why, he said, '(Jawahar) is better known abroad than Sardar and will make India play a role in international affairs. Sardar will look after the country's affairs'.

Maulana Azad, however, had a different story to tell. In India Wins Freedom he writes, that Gandhi wanted Patel to be the next president, and it was Azad, as the outgoing party president, who recommended Nehru's name.

'Some people did propose the names of Sardar Patel and Acharya Kriplani, but in the end Jawaharlal was accepted unanimously,' Azad writes.

So even those who participated in the events do not seem to agree on what actually happened.

And it would not be proper to paint a unilateral picture of the event showing one camp as the culprit and other as a victim.

And even if Patel had really been our first PM, what was there for the Hindu nationalists to cheer?

Patel was also a Congress stalwart. Those who are made to believe that he had a 'soft corner' towards the Hindu Right should read his letters.

They are existing proof that he despised Hindu nationalists and would have liked to deal with them with an iron fist, like he did while banning the Rashtriya Swayamsevak Sangh more than a couple of times.

When it comes to Partition, one finds Nehru and Patel on the same page, on reading their correspondence from those years.

Both opposed it till they could, but after a point, they were not ready to bear with the Muslim League in a way Gandhi or Azad were.

They both told the All India Congress Committee on June 16, 1947 that the only alternative to Partition was a total breakdown of system and anarchy.

Speaking at the Ramlila Maidan on August 11, 1947, Patel called Partition a baleful necessity.

'People say the Congress divided India. It is true that we accepted it only after due deliberation and not in fear of haste,' the Sardar said.

'I was opposed to Partition. But when I joined the central government I saw communal hatred everywhere, from officers down to peons. It is better to accept Partition than to tolerate this (hatred) or a third-party intervention.' (Quoted from the Hindi version of the speech in the Collected Works of Sardar Patel.)

Lastly, if our PM can justify all his policies -- from a 'despotic' (in the words of Dr Amartya Sen) note ban to an ill-executed GST -- by pointing at electoral victories, why couldn't Nehru do the same? How did he go on winning election after election if he was imposed against the popular will?

'Entire Kashmir would have been ours'

Only those who don't know the genesis of Kashmir issue can pass such statements.

So a brief recap should not be out of place, especially for students of WhatsApp University.

While leaving India, the British had allowed the demand of 'Lapse of Paramountcy' of the Chamber of Princes, and the princely states were free to choose which of the two dominions -- India or Pakistan -- they wanted to go.

The situation of some of them was more critical than the others. In Kashmir's case it was worse.

The state was geographically proximate to both countries. It was a Muslim majority state with a Hindu ruler -- Maharaja Hari Singh -- who only appointed Hindus to high office.

A revolt led by Sheikh Mohammed Abdullah -- when he was still friends with the Congress -- threatened Hari Singh's rule. And therefore he got Abdullah arrested.

The maharaja did not want to join either India or Pakistan and wanted to remain independent.

Sheikh Abdullah led a campaign for Kashmir to join the Union of India.

I am sure one doesn't need a degree in 'Entire History' to read letters Sardar Patel wrote on this issue.

The Congress was of the view that like all other rulers, Hari Singh should abdicate and allow a people's government in the state. And he should sign the 'Instrument of Accession' with India.

Not only Nehru, but Patel too wanted Sheikh Abdullah out of jail.

In a letter to Lord Wavell on July 8, 1946, Patel wrote, 'It seems to me that if Sheikh Abdullah's trial is postponed sine die and he is released on his own recognisance, the whole trouble is likely to be over.'

In another letter to the prime minister of Jammu and Kashmir, R C Kak, Patel wrote, 'You are aware that on 15 August, India, though divided, will be completely free, and you also know that by this time a vast majority of states have joined the Constituent Assembly of India. I realise the peculiar difficulties of Kashmir, but looking to its history and its traditions, it has, in my opinion, no other choice.'

'Do you still think that Sheikh Abdullah should continue to remain in jail? I am asking this question purely in the interest of Kashmir state.'

That Kashmir failed to join India before August 15, 1947 left its borders vulnerable to a Pakistani raid and India could not have sent its forces to protect the state until it acceded to the Union, which Maharaja Hari Singh finally did when tribesmen from across the border, aided by the Pakistan army, were knocking on the doors of Srinagar.

The fate of Kashmir was in the hands of its ruler, and only he could have made a difference, not the person holding the office of India's prime minister.

There were and could be two views on the internationalisation of the issue, but even that is rendered immaterial after the Simla Accord of 1972 where India and Pakistan agreed not to involve a third party in the matter.

But in 1947, there were strong reasons in favour of a plebiscite.

That is how India got Junagadh despite its ruler formally acceding to Pakistan.

Moreover, a plebiscite while Sheikh Abdullah exercised a formidable influence on the people of the Kashmir valley would most certainly have gone in India's favour. Maybe that is why Pakistan's then prime minister Liaquat Ali Khan wanted Abdullah's 'pro-India' government dismissed before holding a plebiscite.

As V P Menon, Sardar Patel's secretary, wrote in his classic Integration of Indian States, 'India's stand on Kashmir will not be understood by those who are determined not to understand it.'

So it is neither the post-Independence Congress leadership, nor the history -- or 'entire history' -- of the Kashmir issue with which PM Modi was concerned.

He was more concerned with attacking the current leadership of the Congress and setting the agenda for the 2019 general election by not giving them a chance to corner him on issues like the Rafale deal.

It could not have been any other way. The BJP needs a Congressman to attack a Congressman because their ideological ilk has no leader who can claim to have contributed decisively to the freedom movement or the subsequent nation-building.

Moreover, the Nehru family is the only link between that Congress and this Congress, otherwise even the scholars of 'entire history' would know that how many times the party suffered a division after Independence.

To those who woke up to 'entire Indian politics' after September 2013 (when Modi was made the Bharatiya Janata Party's PM candidate on, incidentally, a Friday the 13th) the PM could be a guardian angel who single-handedly takes on a 'corrupt' Opposition.

But those who have followed politics even when there was no Twitter know what the word 'jumlebaaz' means. 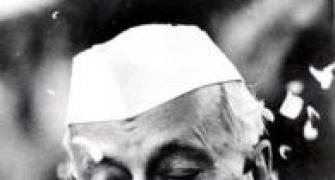 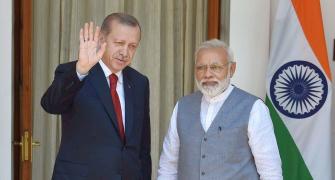