Those who like their meat may consider adding a sliced fried sausage to it. Note: This a very healthy soup with almost no oil. Should you want to gussy it up (and make it richer and less weight-watching) drizzle a little cream at the end and saute the onion and garlic in 1-2 tbsp butter instead of olive oil.

If you prefer, add one or two more vegetables, like half a red/green capsicum and/or, 3-4 mushrooms, finely chopped and/or 3 tbsp finely chopped parsley.

Meat lovers might prefer to add a chopped, fried large sausage to the soup when the tomato paste is added.

Do you have any recipes to share? Please mail the recipe(s) to getahead@rediff.co.in (SUBJECT: RECIPE) with photographs/videos of the recipe, your name, location and a photograph of yours. 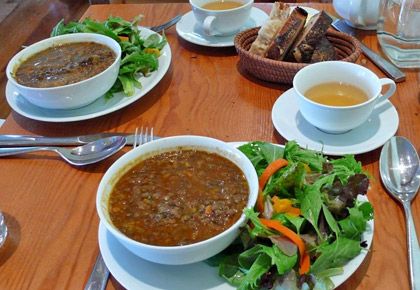