In the biggest reduction in 28 years, the government on Friday slashed corporate tax by almost 10 percentage points as it looked to pull the economy out of a six-year low growth and a 45-year high unemployment rate by reviving private investments with a Rs 1.45-lakh crore tax break. 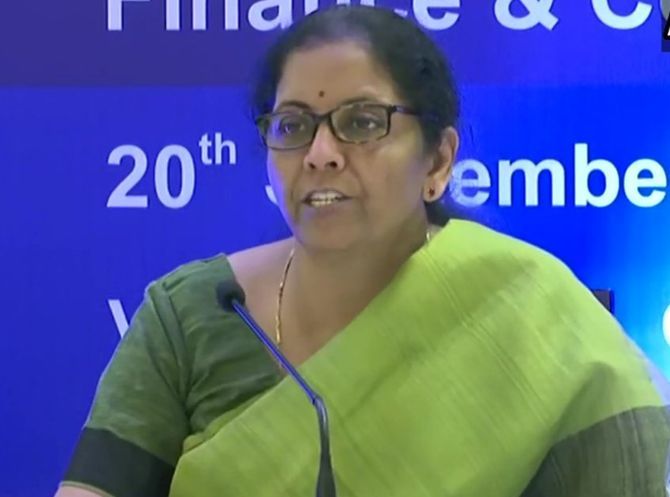 Two-and-a-half-months after presenting her maiden Budget that was hailed as "development-friendly" and "future-oriented", Finance Minister Nirmala Sitharaman announced cutting corporate tax rate to 25.17 per cent to bring them at par with other Asian countries such as China and South Korea but at the expense of potentially breaching the 3.3 per cent fiscal deficit target.

Markets cheered the announcement with the BSE Sensex jumping by the most in a decade while the rupee also climbed against the US dollar.

This will be effective on the condition that these companies will not avail of any other incentive or concession such as tax holiday enjoyed by units in Special Economic Zones (SEZ) and accelerated depreciation.

The effective tax rate for existing units, after considering surcharges and cess such as Swachh Bharat cess and education cess -- which are levied on top of the income and corporate tax rates -- will be 25.17 per cent as compared to 34.94 per cent now. For new units it will be 17.01 per cent as opposed to 29.12 per cent now.

The new tax structure is effective from April 1, 2019, and will bring the Indian corporate tax rate on par with that of Asian peers in a bid to attract investments.

Prime Minister Narendra Modi termed the move as "historic" and said the announcements made in the last few weeks show that his government is leaving no stone unturned to make India a better place to do business.

"It will give a great stimulus to #MakeInIndia, attract private investment from across the globe, improve competitiveness of our private sector, create more jobs and result in a win-win for 130 crore Indians," he tweeted.

The reduction in corporate tax, which India Inc hailed as the one which will revive growth and investment, is the single biggest cut in tax rates since India opened up its economy in 1991.

India had the highest effective corporate tax rate of 38.05 per cent in 1997. 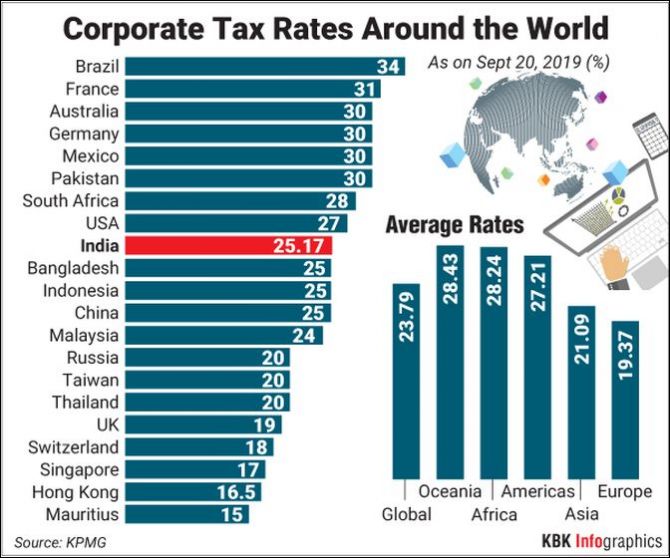 Companies in China, South Korea and Indonesia pay 25 per cent tax, while those in Malaysia pay 24 per cent. Only Japan has a higher tax than India at 30.6 per cent. Hong Kong has the lowest corporate tax rate of 16.5 per cent while Singapore has 17 per cent rate and Thailand and Vietnam levy 20 per cent tax on companies.

Sitharaman said the latest measures will promote growth and investment, but sidestepped questions on its impact on fiscal deficit.

"We are conscious of the impact all this will have on our fiscal deficit, and will reconcile the numbers," she said.

Sitharaman also said no tax will be charged on share buyback by listed companies that announced such a move prior to July 5.

Also, the super-rich tax by way of enhanced surcharge on income, announced in the July 5 Budget, will not apply to capital gains arising on equity sale or equity-oriented funds liable to securities transaction tax (STT) with a view to stabilise flow of funds into capital markets.

Also, the companies will not have to pay minimum alternate tax (MAT).

She said any company which does not opt for concessional tax regime and avails tax exemptions or incentives shall continue to pay tax at pre-amended rates.

"These companies can opt for concessional tax regime after the expiry of tax holiday or exemption," she said.

To provide relief to companies which continue to avail exemptions and incentives, the rate of MAT has been reduced from existing 18.5 per cent to 15 per cent.

The mandatory two per cent corporate social responsibility (CSR) spending base has been widened to include government, public sector undertaking (PSU) incubators and public-funded education entities.

With her maiden budget seemingly failing to address issues facing the economy, Sitharaman had over the past one month announced measures in three tranches for different sectors of the economy including automobiles, banks and real estate.

Modi had on July 5 termed her maiden budget as "citizen-friendly, development-friendly and future-oriented".

India's gross domestic product (GDP) growth slowed for the fifth consecutive quarter in April-June 2019 to 5 per cent, the lowest in six years. This was on the back of faltering domestic demand, with both private consumption and investment proving lacklustre.

Accompanying structural reforms included a further easing of the foreign direct investment regime and consolidation of the public banking sector.