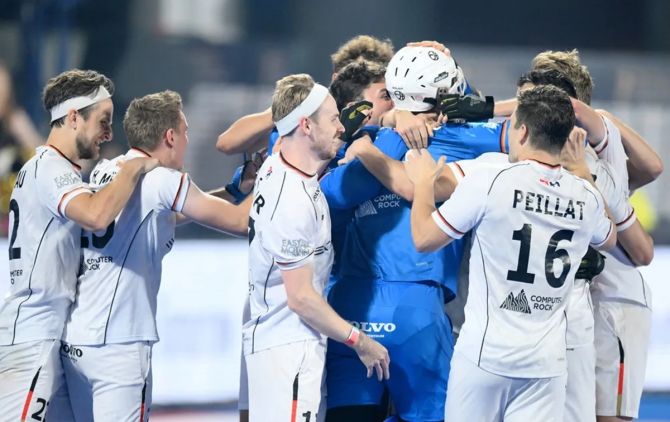 IMAGE: Germany's players celebrate with goalkeeper Alexander Stadler, who brought off many saves, after the men's hockey World Cup quarter-final against England, in Bhubaneswar, on Wednesday. Photograph: FIH HWC2023

Germany struck twice with two minutes left in the match to wipe out a two-goal deficit before prevailing over England in the penalty shoot-out to make a dramatic entry into the semi-finals of the Men's Hockey World Cup, in Bhubaneswar, on Wednesday.

Captain Mats Grambusch and his younger brother Tom scored in the space of a 60 seconds, after England were ahead 2-0 till the 58th minute, as Germany snatched victory from the jaws of defeat in an edge-of-the-seat quarter-final.

Germany, who finished second in Pool B and defeated France 5-1 in the crossover match, will face title contenders Australia in the semi-finals on Friday.

The other semi-final will be between the Netherlands and defending champions Belgium. The Dutch, runners-up in the last two editions of the tournament, made the grade following a 5-1 victory over South Korea in the day's other quarter-final.

Australia and Belgium entered the semi-finals on Tuesday. The former beat Spain 4-3 while the Belgians beat New Zealand 2-0 in the quarter-finals.

The vociferous spectators at the Kalinga Stadium thought that England would wrap up the match comfortably after Zachary Wallace (12th minute) and Liam Ansell (33rd) gave them a 2-0 lead.

But to their astonishment, the Germans came back roaring and scored in the 58th and 59th minute through Mats and Tom Grambusch respectively.

Just before that Christopher Ruhr wasted a chance from a penalty-stroke in the 57th minute.

Trailing 1-2, Germany got a penalty-stroke with a minute to go in the match. Mats then asked his younger brother Tom to take it and he made no mistake from the spot to take the match to the penalty shoot-out.

"It was a crazy match for sure; we were behind for most of the match, but we were able to convert the chances that came our way late in the match. It shows the character of the team," Mats said.

"Our parents must be watching this match and they must be extremely happy seeing that we both scored in a crucial match for the team and country," Tom said. 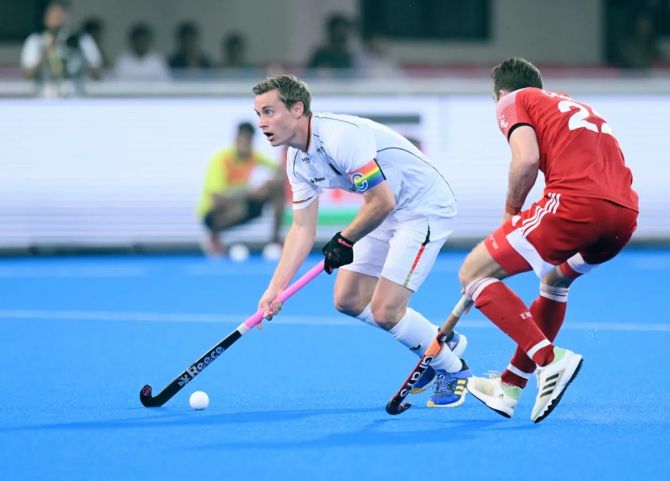 The German fightback is reminiscent of their national football team which is famous for its never-say-die attitude.

"It is a cruel game; you were 2-0 up less than five minutes to go in the match and you lost the game," rued England captain David Ames.

England had directly made it to the quarter-finals after topping Pool D ahead of India.

They started as the more attacking side and took the lead in the 12th minute off a fine combination among Jack Waller, Stuart Rushemere and Zachary Wallace.

Waller cut into the striking circle from the right and Rushemere weaved around three German defenders before Wallace slammed home with a tennis-like volley.

Wallace had another go at the German goal later but his shot, after dodging past a defender in the second quarter, was blocked by the goalkeeper.

Germany pressed in the second quarter with a lot more players upfront but England defended well with man-to-man marking. But the relentless German attack resulted in the match's first penalty-corner which they wasted.

The Englishman did not give space to the Germans whenever they entered the striking circle. But Harry Martin got space and time to take a shot but the goalkeeper was again at the thick of things as he blocked Germany's second penalty corner two minutes from half-time.

Trailing 0-1 at half-time, Germany let themselves down as Timur Oruz received a green card in the 31st minute for two-minute suspension and England pounced on that advantage to earn two back-to-back penalty corners and double their lead from the second one.

Liam Ansell made a soft touch of the ball after the stopper put it on his path and then sent a powerful shot which beat German goalkeeper Alexander Stadler all ends up.

Germany were under tremendous pressure in the third quarter as Christopher Ruhr was shown the yellow card in the 38th minute for five-minute suspension.

Just before the end of the third quarter, play was stopped after England's Liam Sanford fell down on the turf and a few of his team-mates surrounded Ruhr but the umpires were able to calm the players down.

Germany got a penalty stroke in the 57th minute but Christopher Ruhr's shot hit the crossbar. A minute later though captain Mats Grambusch pulled one back with a field goal.

The match ended at 2-2 in a dramatic fashion as just a few seconds later, Mats's brother Tom scored from the penalty stroke.

With 38 seconds left in the regulation time, Germany earned a penalty-corner but England defended it under tense circumstances. 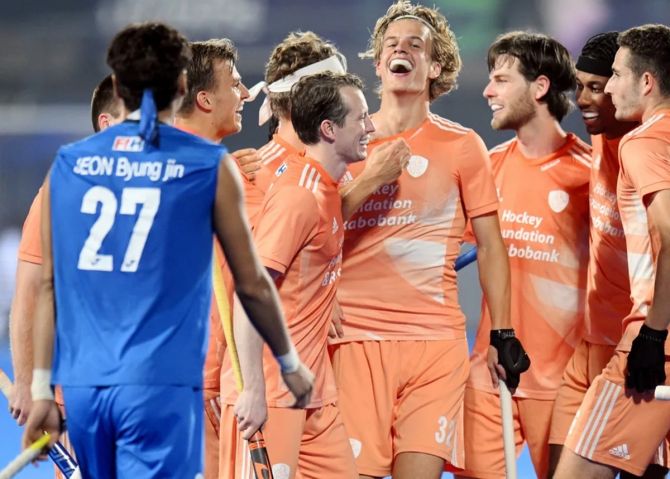 IMAGE: The Netherlands players celebrate a goal against the Koreans. Photograph: FIH HWC2023

In the second quarter-final, No. 9-ranked South Korea, who had stunned 2016 Rio Olympics champions Argentina in the crossover match on Monday, yet again punched above their weight as they gave a spirited fight to their more fancied opponents, ranked third in the world.

One would have thought that the Netherlands would roll over South Korea. But it was not to be as the small Asian country fought tooth and nail and were not intimidated by the reputation of their opponents.

The teams were were locked goalless in the first quarter with both sides earning two penalty-corners each without utilising any of them.

The Netherlands were the dominant side in the second session with more circle penetration and took the lead three minutes from the first half, with Koen Bijen scoring a field goal.

The nimble-footed Koreans, however, did not just sit back. They made quick counter-attacks and forced two penalty corners though they could not convert any of them.

From the second penalty corner, penalty-corner specialist Jang Jonghyun's drag flick hit German umpire Ben Goentgen on the face after the ball deflected from the stick of a Dutch defender.

Goentgen, who fell down in pain before regaining composure, was helped out of the field and reserve umpire, Raghu Prasad of India, took charge for the remainder of the match.

The Netherlands took the game out of South Korea's reach in the third quarter with two goals in the space of five minutes. Bijen got his second goal from a penalty-corner in the 31st minute before Justen Blok struck a field goal in the 36th minute.

Van Heijningen and Teun Beins then completed the rout. 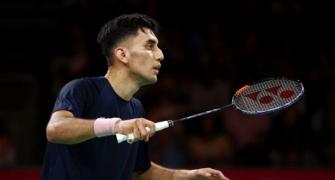 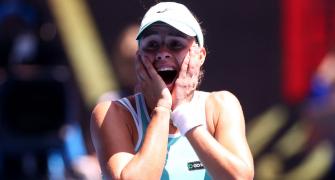 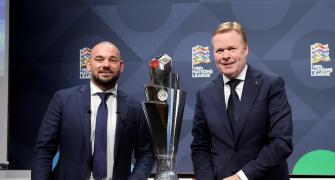 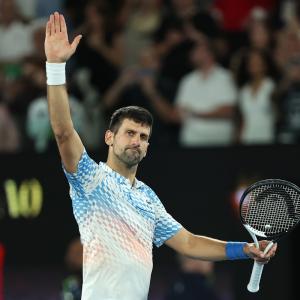 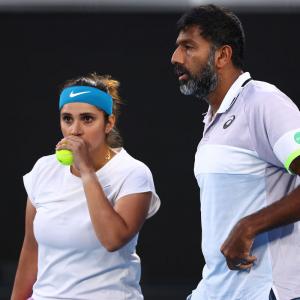