News
Business
Movies
Sports
Cricket
Get Ahead
Money Tips
Shopping
Sign in  |  Create a Rediffmail account
Rediff.com  » News » What I learnt from the COVID-19 Crisis

'The virus has been ahead of us till now, and we have been chasing the virus.'
'It is time we have to be a step ahead of the virus, and this is possible only by checking the oxygen level.' IMAGE: A sample being collected for a COVID-19 test in Surat, August 6, 2020. Photograph: PTI Photo

In part 3 of the Rediff.com series 'What I Learnt from the COVID-19 Crisis' series, Shobha Warrier/Rediff.com speaks to doctors and scientists and finds out how they have learned to stay ahead of the virus. 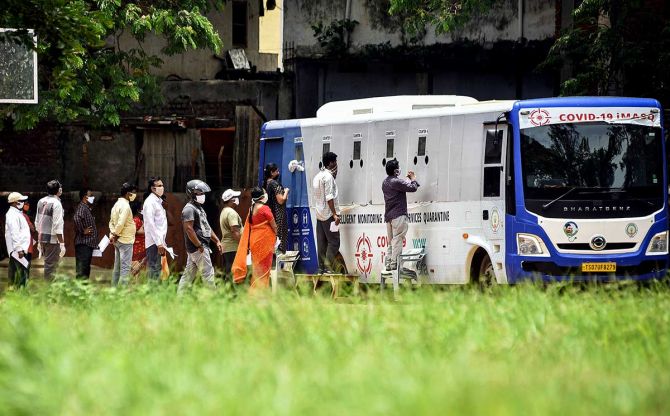 IMAGE: People queue at a mobile swab collection bus for the COVID-19 test at the IGMC stadium in Vijayawada, August 6, 2020. Photograph: ANI Photo

Dr Anoop Thekkuveettil, a senior scientist in the division of molecular medicine at the Sree Chitra Thirunal Institute of Medical Sciences and Technology in Thiruvanathapuram said in May that the coronavirus has an advantage over us human beings.

He has learnt now that we can be ahead of the virus by using the Pulse Oxymeter. 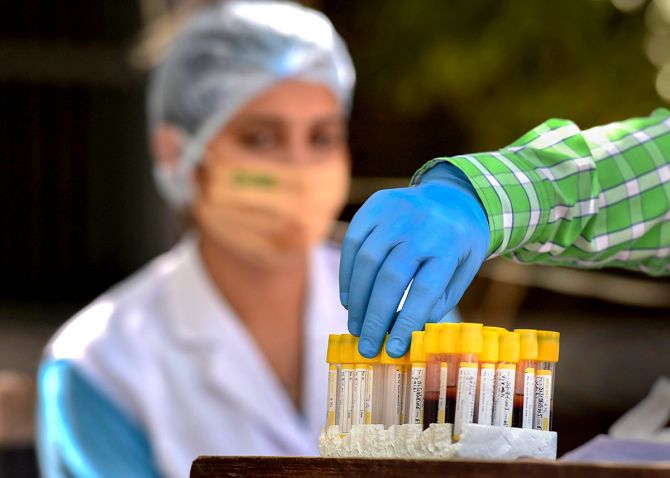 IMAGE: A health worker handles a vial containing a blood sample of a person for serological survey at a school in New Delhi, August 6, 2020. Photograph: Manvender Vashist/PTI Photo

Professor Gobardhan Das, a well-known immunologist and chairperson of the Centre of Molecular Medicine at Jawaharlal Nehru University, had told us in early April that there was a link between BCG vaccination and resistance to COVID-19. Dr Lakshmi Vijayakumar, consultant psychiatrist and founder of Sneha, an NGO that works for suicide prevention, discusses how the pandemic has affected mental health.

In March, when COVID-19 first surfaced in India, Dr Vijayakumar told Rediff.com, "Social isolation itself can create panic among people. So, stay connected."

Three months later, she says like she had feared, the number of people with mental issues has risen exponentially. 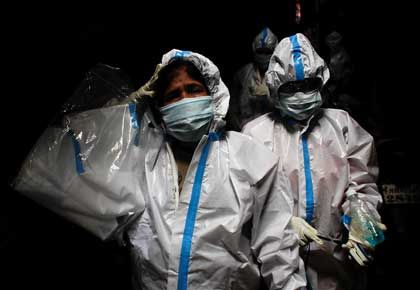