'The COVID-19 pandemic must push the military into a long-term reconsideration of its primary challenges.'
'There must be greater emphasis on humanitarian aid and disaster relief including the management of contagious illnesses and impending crises caused by climate change,' notes Ajai Shukla. 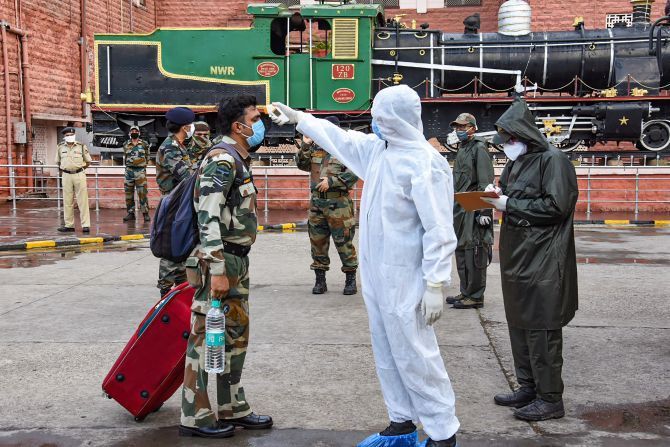 IMAGE: A medic uses thermal screening on army personnel who arrived in Jodhpur from Bengaluru on a special train. Photograph: PTI Photo

In just a few months, the novel coronavirus pandemic has upended conventional calculations about national and international security.

On January 11, Army chief General Manoj Mukund Naravane had listed his primary challenges as defending the Siachen glacier, the China border, the Pakistan border and tasks related to counter-insurgency and counter-terrorism, in that order.

On March 4, as COVID-19 was picking up steam, the general gazed into his crystal ball and declared that tanks and fighter aircraft would soon become irrelevant and be replaced by new-technology lasers and directed energy weapons.

Today, with large sections of the army, navy and air force in preventive lockdown against COVID-19 and the generals rethinking operational functioning, it is embarrassingly evident that defence and national security planners, whose primary function is to anticipate threats, were oblivious to the possibility of a global pandemic.

Indian planners were hardly alone in this blindness.

'Infectious diseases' didn't make it into that list, even as China was clearly reeling under a new contagion.

Today, notwithstanding the continuing imperative for us to guard our borders and combat militant activity that continues in dribs and drabs, the COVID-19 pandemic is unquestionably India's greatest security, economic and social challenge.

The three defence services have been sucked willy-nilly into the national effort against COVID-19 and the defence economy has shifted focus to developing and manufacturing equipment to combat the effects of the virus.

From repatriating Indian citizens working in foreign countries, including from China, Japan, Iran and Italy; establishing quarantine facilities; setting up backup medical facilities with intensive care units and ventilators for COVID-19 patients and diverting defence factories to manufacturing medical equipment, military resources have been thrown into backing up our woeful civil healthcare system.

This is hardly surprising: Numerous North American and European countries, with their excellent healthcare and social service infrastructure, have deployed military resources against the pandemic.

The armed forces are uniquely structured and equipped for such emergencies.

Their inherent 'surge capacity' enables the quick mobilisation of personnel and equipment to meet extraordinary requirements.

The military is organised in a well defined, but flexible, hierarchy that functions in hazardous situations, even in the face of high casualties.

Militaries are equipped with expensive and extremely useful assets -- their own mobile medical departments, ships outfitted as floating hospitals; heavy transport aircraft and sealift, heavy engineering departments that can erect temporary hospitals in days, and mobile troops that can enforce lockdowns and quarantines.

Designed to be self-sufficient in wartime, the military can be rapidly switched between hotspots independent of other government wings.

India's military has not yet been required for enforcing law and order, but, if the situation worsens, widespread hunger could conceivably bring protests out on to the streets.

The military is fully on board in combating COVID-19 since the pandemic sharply undermines its interests.

Its greatest worry is the blow to the economy, which will inevitably erode the already limited funds the government can spare for defence.

An analysis reveals that over the decade beginning 2009-2010, a period in which gross domestic product grew between 6 and 8 per cent annually, the defence capital budget (which buys new weapons and equipment) rose by an annualised average of just 5 per cent, after adjusting for exchange rate depreciation and domestic inflation.

In other words, during the decade that ended in 2018-2019, modernisation funding grew 1 to 3 per cent slower than the growth in GDP.

Economic growth assessments for the current year already foresee GDP growth contracting to 0.4 per cent, and this will almost certainly turn negative if the lockdown is extended or re-imposed later.

Either way, there is near certainty that this year's defence capital allocations will be slashed in the revised estimates, given the crippling blow the lockdown has dealt to government tax revenues and pressure on the government to provide bailouts to industry and subsidies for the over 100 million people who are likely to slip below the poverty line.

Any reduction in defence spending would be borne by the capital budget, since salaries and pensions cannot be reduced at this stage.

Ironically, given the longstanding criticism that the military's manpower is bloated, the COVID-19 pandemic is certain to make exceptional demands on personnel, especially those manning operational units that operate in cramped confines where social (or professional) distancing is unfeasible.

Any outbreak of COVID-19 in, say, an army piquet on the Line of Control, or on board a naval warship or submarine, would require the quarantining of all personnel and their replacement with a fresh contingent or crew.

Furthermore, all personnel returning from leave would require to be quarantined for at least 14 days, in purpose-built isolation facilities, before being cleared to re-join their units and mingle in close quarters with their comrades.

Given that personnel go on leave at least twice each year, every soldier, sailor and airman will now spend close to a month in unproductive quarantine.

The COVID-19 pandemic, even if it is eventually limited in its effect or controlled somehow, must push the military into a long-term reconsideration of its primary challenges.

There must be greater emphasis on humanitarian aid and disaster relief (HADR) -- including the management of contagious illnesses and impending crises caused by climate change.

The army, navy and air force have traditionally, and willingly, provided HADR in floods, earthquakes, cyclones and tsunamis, but as a secondary role under the rubric of 'Aid to the Civil Authority', discharged using its war-fighting equipment at hand.

In the days ahead, the military would do well to create an arsenal of dual-use assets, including hospital ships and amphibious vessels to provide succour along India's 7,500 kilometre coastline and island territories; a comprehensive beefing up of the army medical corps with containerised field hospitals that could be transported by air and made functional within hours; more medium-and-heavy lift transport aircraft and helicopters to deliver significant quantities of aid to remote regions; and a countrywide communications and surveillance backbone, designed not just for the military’s own use but to also provide redundancy for civil infrastructure.

By creating assets that serve the nation in peacetime, the military would be making a more powerful case for a larger defence budget.

Finally, many of these HADR military assets would also further India's power projection aspirations, its regional diplomacy and role as an Indian Ocean security provider.

Given the pan-border nature of pandemics, COVID-19 provides India with a useful outreach mechanism for the South Asian region, including Pakistan.

At a juncture when New Delhi has reached a dead end with Islamabad, purposefully taking forward with Pakistan the joint approach tentatively initiated by Prime Minister Narendra Damodardas Modi last month would be attractive, given this country's capabilities and capacities in medicine.

It would be good strategy to turn a serious security vulnerability into an opportunity for regional cooperation. 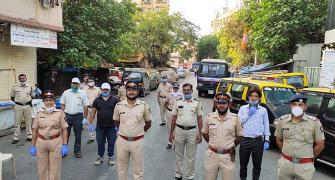 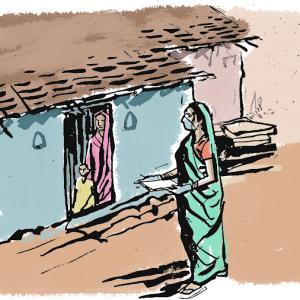 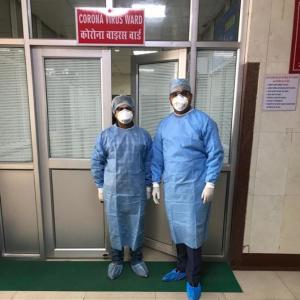