'We cannot be naughty and expect the government to do good!'
'We have to behave ourselves and then we can expect the government to support us.'
'If we are able to protect ourselves well, then we should not be having deaths.'
'Unfortunately, people have gotten into this super scary event participation (mode) -- birthday parties, large gatherings.'
'Among the people who have attended those, 80 to 90 per cent of them have come down with COVID-19.' 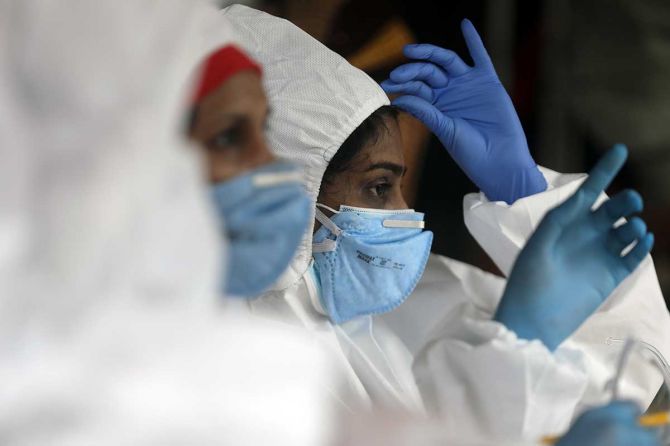 COVID-19 has held up a mirror to India.

Our valiant struggles with this tricky viral illness have both starkly and harshly shown us what is missing in our systems.

And what needs to be urgently rectified.

Public health expert Dr Gudlavalleti Venkata Satyanarayana Murthy -- who terms SARS-CoV-2, the respiratory pathogen that causes COVID-19, a virus with a "transmission potential far more than the other viruses in recent history" and "far, far faster" than even the common cold, but maybe not the 1918 Spanish flu -- has been looking very carefully into that uncomfortable mirror on India's behalf.

He offers a simple six-point analysis of what COVID-19 has shown him about the Indian public health framework and he provides key actionable improvements that, he feels, are totally imperative; improvements the Narendra Damodardas Modi government needs to move on immediately.

Here is why we should listen to him:

Dr Murthy, who qualified in Guntur, Delhi and London, and worked for the All India Institute of Medical Sciences, New Delhi, and the World Health Organisation, Geneva, has many solid years of experience working in public health as the principal investigator for various epidemiologic and operational projects in India, Nigeria, Bhutan, Nepal, Bangladesh and Pakistan for different diseases.

He is the director, public health at the non-profit Public Health Foundation of India and a professor in public health disability with the International Centre for Eye Health at the London School for Hygiene and Tropical Medicine, London.

Presently, Dr Murthy provides technical advice on COVID-19 to WHO and is a member of the Technical Advisory Group on COVID-19 for reopening schools. 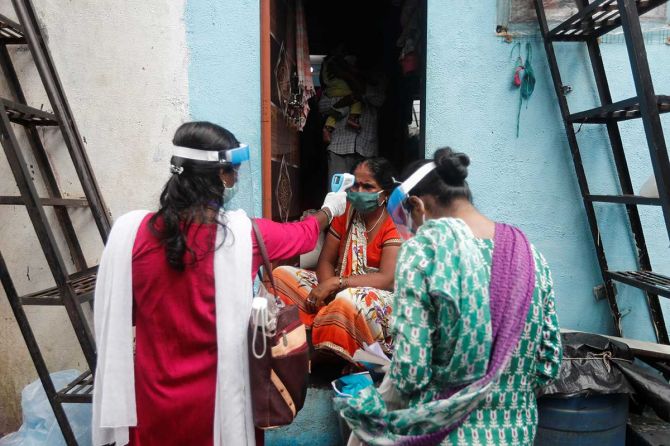 Lesson One: The urgent need for a public health cadre

This is the absolutely critical time for having public health cadre -- a cadre of public health specialists who have been trained to tackle the outbreak, to plan appropriate action and see that policies are made.

A public health cadre is the need of the hour.

You could have something like an allied service, where people (medical personnel) could be posted to (different) states.

Because health is a state priority, states should have a public health cadre.

That is the most critical point, because this is not only for this condition.

This is for infections which will come in the future, for food poisoning or all the alcohol adulteration incidents and those deaths occurring in Punjab or Andhra Pradesh, where people are drinking sanitiser**. 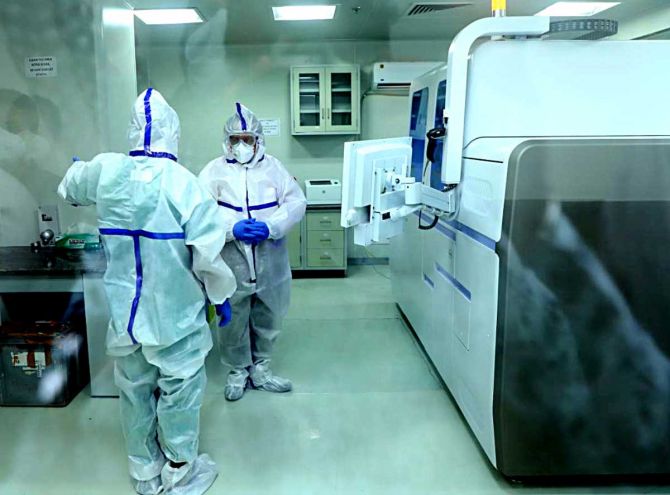 IMAGE: A COBAS 6800 testing machine at the National Centre for Disease Control in New Delhi, May 15, 2020. Photograph: ANI Photo

Lesson Two: Why is the NCDC not leading the fight against COVID-19?

All the countries who have learned and moved on from illnesses in the past have had a center for disease control as the apex body to tackle these conditions.

We have something called the National Centre for Disease Control, the NCDC.

But unfortunately, ICMR, which is a research body, is leading the efforts for the COVID-19 response, which is absolutely unacceptable.

The NCDC should be the apex body collecting all the data, giving us policy directives and seeing that evidence is used for action.

The NCDC has not been given a policy directive by the government that they should act.

So that's why they took a backseat, which is very unfortunate, because they're the ones who are supposed to lead the fight for any infection to leave. 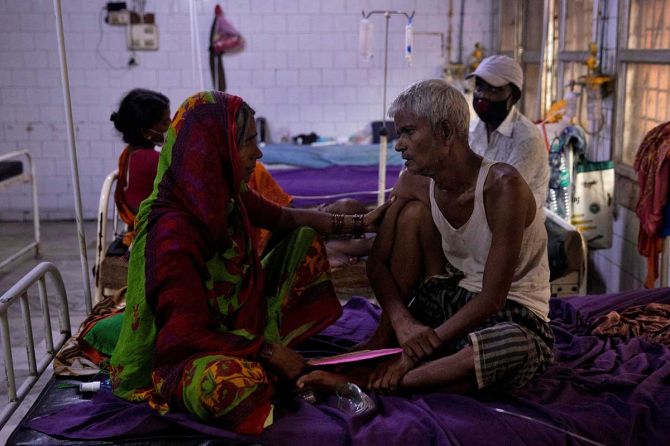 IMAGE: A woman comforts her husband at the Jawaharlal Nehru Medical College and Hospital in Bhagalpur, July 28, 2020. Photograph: Danish Siddiqui/Reuters

They have to be skilled in, going house to house, finding out about who has COVID-19

Unfortunately, none of the ANMs (auxiliary nurse midwife), the ASHAs, the medical officers, primary health centers, community health centres and cottage hospitals have been involved.

It has always been Mumbai, Hyderabad or Delhi.

Action should have come from all parts.

They have not been trained, skilled, provided any equipment.

Without them being engaged and if only private hospitals or specialised hospitals take the lead, then they are missing out on a lot of the benefits, which can happen before people (the ill) come to the big hospitals. 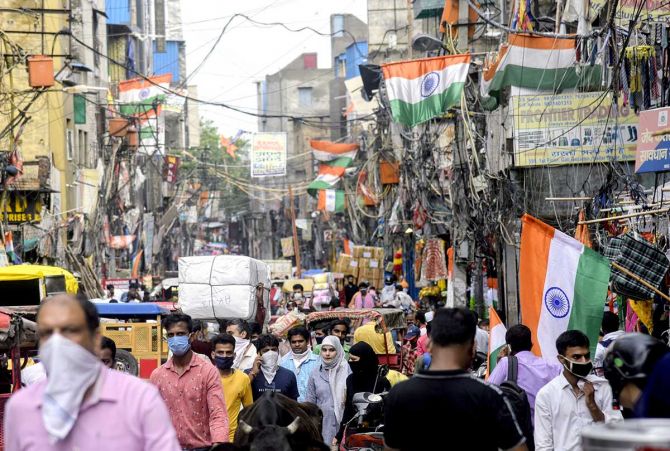 Lesson Four: We have to behave ourselves

People have to realise that everybody is a partner in a condition like this, and even in the future.

Health, at the end of the day, affects an individual.

Everything can't be pushed on to the government.

Not things like behaviour change, which is so critical.

When we use masks, we see that there is a difference.

There is adequate evidence that shows that simple measures -- like physical distancing, use of masks -- can make a tremendous difference in the transmission.

And that can't be done by the government.

That has to be done by individuals, by the community.

So, in all these things, going forward, unless we start cajoling the community, getting them to partner, giving them specific roles -- whenever we have something of this nature, it could be a gas leak, it could be an infection -- but without the community participating, nothing can be done.

We cannot be naughty and expect the government to do good!

We have to behave ourselves and then we can expect the government to support us.

Otherwise, it is just a wasted effort, if you pour in resources, and people's behaviour doesn't change; it is not going to yield much benefits.

If we are able to protect ourselves well, then we should not be having deaths. Our death rate should be definitely reduced.

Among the people who have attended those, 80 to 90 per cent of them have come down with COVID-19.

Then there have been lots of them who are very rich and started using unnecessary medication and complicated the situation.

The moral of the story is good behaviour.

(On how to get the community to participate) Yes, through interpersonal channels, like the ASHAs, as well as we have mass media at our control.

Are we bringing out enough material which can bring out a behavioral change?

The answer is: No.

(There is a lot of difference between) just talking about something, in a third person, compared to having a personal touch.

That is very critical for behaviour change.

Unless that happens, you will not have behavior change.

This should be systematised.

It's not just about COVID-19 but anything in the future and you need to have communities participating because they would have major purpose. 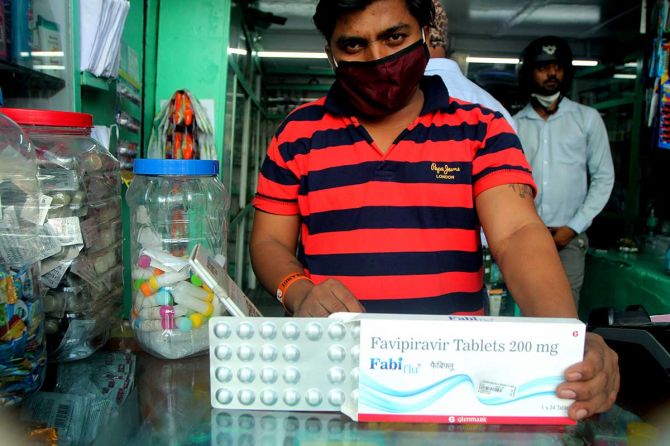 I'd like to mention that whatever treatment we use, it has to be evidence based.

Unfortunately, we have too many treatments floating about for COVID-19, which do not have any evidence basis.

(Treatment methods for which) even small studies have not shown benefits or very limited benefits.

But because there is so much media attention on any medication that is available, people have started hoarding the medicines or have charged tremendous amounts for something which is almost useless.

People have been taken for a ride on so many medications.

I don't think there is a difference between a rural practitioner, who may talk about herbal medicines, or today the allopathic medicine system.

You cannot have something put on the market because one person says it works.

One person's thoughts do not make a scientific body.

If we do that (use evidence-based medication only) we would be reducing a lot of the economic burden on people, who are already overburdened and who are willing to pay any amount for a medication, which does not yet have a proven track record.

The (results of) an AIIMS study showed that convalescent plasma therapy does not make a difference to death rates.

The numbers of the study were very small, 30 people.

But it does not make a difference in death rates in COVID-19.

Only two drugs at the moment are going through a lot of clinical trials - one is dexamethasone and the other remdesivir.

The third is convalescent plasma.

Now clinical trials are going on across the world with these three medicines in the main.

So, at the moment, with all medication it is just trial and error and we don't have any medicine.

We just repurposed different medicines and are hoping that they work.

Medications should not to scaled up unless there is adequate evidence that they work.

This is very, very critical. 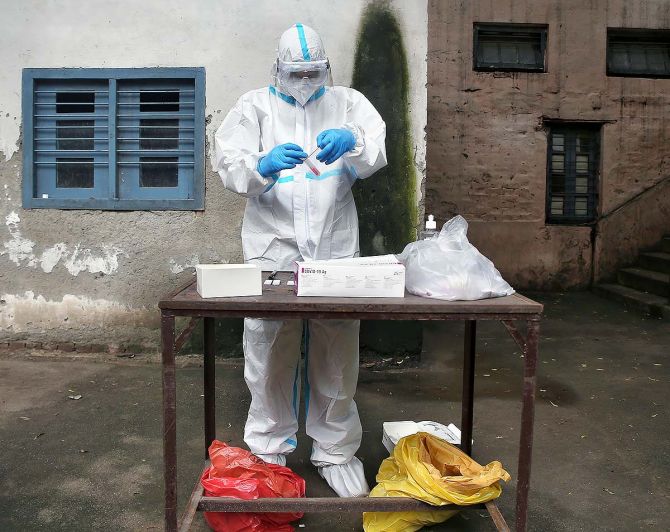 We need to have the entire system lead by technical experts in a situation like this.

A bureaucrat -- (who is looking after) health or social development or education -- is in one position today and in another position tomorrow.

They keep moving around, therefore there is no responsibility on their shoulders, compared to those with technical expertise.

Countries which have listened to their technical experts have done far well in their COVID-19 response compared to countries who have had a political/bureaucratic response.

When someone does not have responsibility and authority, they are not going to put their heads on the block.

These are the things to keep in mind for the future.

We need to learn from the errors that we made in the past.

And, going forward, see that these sorts of issues do not crop up again.

Dr Murthy on the vaccine:

There's a lot a lot of talk about the vaccine and everybody has begun to believe that that Oxford Vaccine Group's version will materialise any time soon. But it's still a long way off. Isn't it?

Absolutely. We will not have a vaccine before the first quarter of next year.

The biggest step that needs to be taken is the phase three of the vaccine's trial.

Phase three involves a large number of people being injected and followed up not just for two weeks, three weeks, but for three to six months to see whether there is an immunity which is long lasting, whether there is any late side effects.

All these things have to be studied which will take us to the end of the year at the minimum.

The first quarter, 2021 would be when we would know if it has been successful and then it would be available for vaccines.

*The Indian Medical Service, which officially began in 1858, was British India's military medical service, whose officers were British and Indian and worked in civilian hospitals.
Many were distinguished officers like Sir Ronald Ross who won the Nobel Prize for his work on malaria or Henry Vandyke Carter, the illustrator of Gray's Anatomy.

**Between late July and early August over 120 people have died after imbibing toxic liquor in the districts of Tarn Taran, Gurdaspur and Amritsar in Punjab.
On July 31, 6 people died in locked-down Kurichedu village, in Andhra Pradesh's Prakasam district, from drinking sanitiser.
Some 235 were regularly drinking it instead of alcohol. 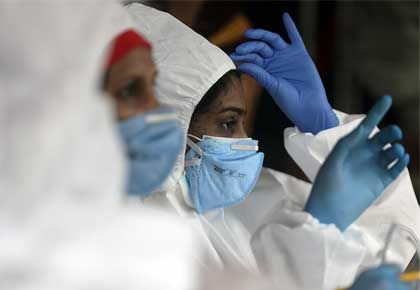 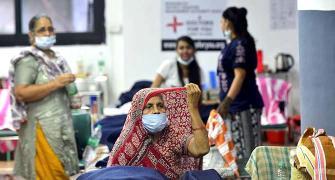 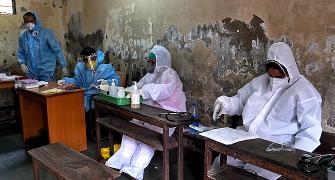 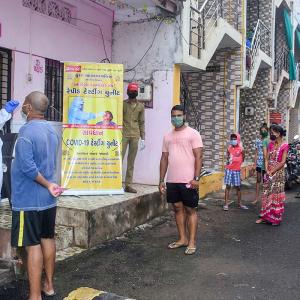