'This proved that whatever was growing in the mosquito's gut was a parasite -- it was almost certainly the malarial parasite.'
A fascinating excerpt from Roopa Pai's From Leeches To Slug Glue: 25 Explosive Ideas That Made (And Are Making) Modern Medicine. 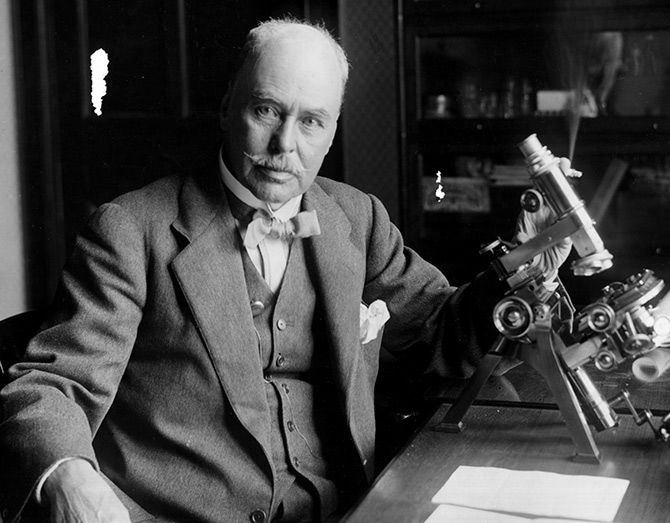 IMAGE: Sir Ronald Ross, winner of the Nobel Prize for Medicine in 1902, sitting at a microscope in his laboratory, February 1927. Photograph: Keystone Features/Hulton Archive/Getty Images

In 1894, in an article in the British Medical Journal, Patrick Manson put forth what became known as the 'mosquito-malaria theory', saying that he suspected that plasmodium, like the filaria parasite, also spent part of its life cycle in a mosquito's body.

On 10 April of the same year, soon after the article had been published, a doctor called Ronald Ross, who had been working in the Indian Medical Service for over a decade but was now in England on a brief sabbatical, came to meet Patrick Manson.

That meeting was to change Ross's life, and the history of medicine, forever. 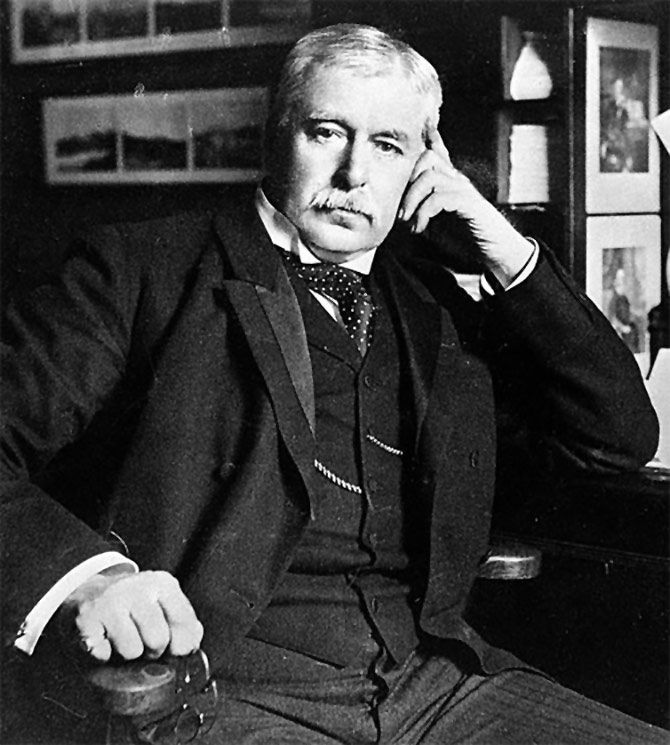 But let's rewind a little and find out a little more about this Ronald Ross.

He was almost a desi, this Ross.

Born in Almora to Scottish parents just three days after the First War of Indian Independence broke out in 1857, he had been sent off to England at the age of eight to get himself an education.

Poor Ross did badly at college, and once he had scraped through the course, flunked the entrance examination to the Indian Medical Service.

The next year, he took the exam again, and this time made it through by the skin of his teeth.

In 1881, as per his father's dearest wish, he entered the Indian Medical Service.

Like other doctors in the tropics, Ross was also curious about malaria, but his personal interest came from having seen his own father suffer through a particularly severe bout of the disease.

Plus, he was constantly treating soldiers for malaria, whether he was stationed at Mysore, Bangalore or Madras. On a cold afternoon in November, Manson, impressed with the younger doctor's mind, shared his mosquito-malaria theory with him in great detail.

Ronald Ross now had an overwhelming mission in life.

On March 20, 1895, he ended his sabbatical and sailed back to India, impatient to get on with his life's work.

Thus began three years of an overwhelming and often frustrating obsession for Ross.

The trouble was that he could only do his malaria research in his spare time, and he had very little of it, given his job as a surgeon major in the army.

Through his darkest days, what kept him going was his correspondence with Manson, who gave him advice, pointed him in new directions when he seemed to come up against a wall and encouraged him at every turn --'Above everything, don't give it up. Look upon it as a Holy Grail and yourself as Galahad and never give up the search.' 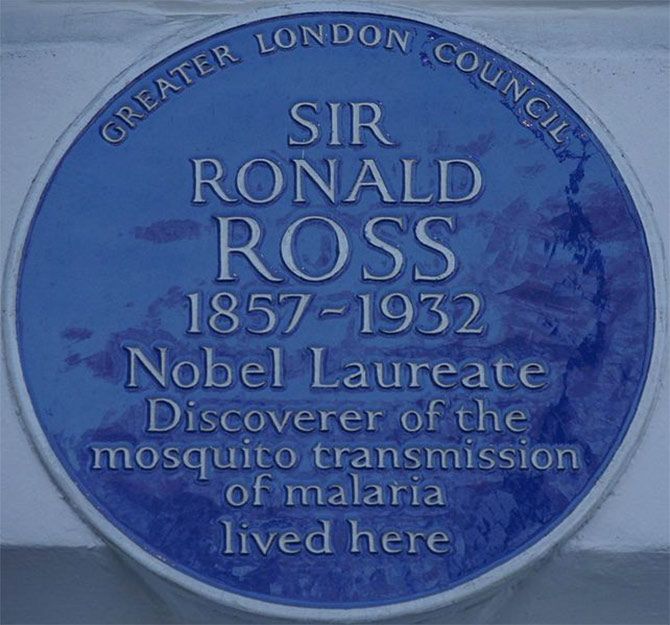 In the beginning, things went spectacularly well for Ross.

As early as May 1895, he bred mosquitoes in captivity from larvae collected from water.

He then put a malaria patient under a mosquito net and released the mosquitoes inside it, so that they would bite him, before he captured the mosquitoes and examined the blood in their stomachs.

The crescent-shaped filaments of plasmodium were there, clear as day!

To test the next part - transmission -- he let four other mosquitoes bite the malaria patient again, and put them in a bottle with a little water in it.

Once the mosquitoes had laid their eggs, he got three people, including his servant Lutchman, to drink the water (he had to pay a decent sum of money to each to persuade them, of course!).

None of them developed malaria.

It was a setback, but it was still early days, and Ross was about to start his next round of investigations when he was transferred to Bangalore.

He spent a frustrating eighteen months there -- despite the many mosquitoes in Bangalore, there was no malaria -- but continued his research when he could.

It was during this time, after several more trials of drinking contaminated water had failed to transmit the disease that he began to suspect that malaria was transmitted by the bite of the mosquito.

When he got mosquitoes that had bitten a malaria patient to bite a healthy person, however, once again, the person remained disease-free!

Ross didn't know it then, but this last failure was because he was using grey Culex mosquitoes, which are not malaria vectors.

Once again, it was Manson who urged him to re-try the experiment using different species of mosquitoes. 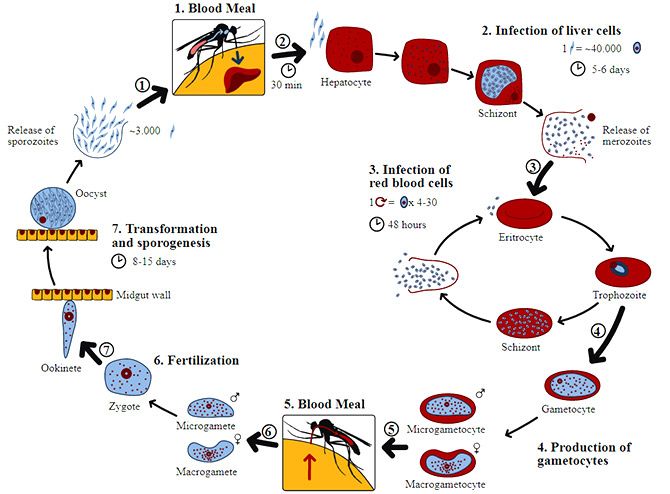 In May 1896, Ross made good use of a short leave he had been granted to visit Sigur Ghat in Ooty, known to be a malaria-endemic region.

Despite all his precautions, however -- he slept under a net, with his windows closed, and had even taken a preventive dose of quinine, which was then the only sort of treatment for malaria -- he caught the disease within three days of setting foot in Sigur.

While he rested, physically weakened by the disease but with his senses still on high alert, he observed, on the wall by his bed, a mosquito that looked different from any he had seen before.

This one was a 'brown' mosquito with dappled wings, and it was perched there in a peculiar posture.

He filed the image away for the future, and when he was transferred back to Secunderabad in June 1897, he began the search for the brown mosquito, sending out his assistants to bring him mosquito larvae from every drain and stagnant pool in the city. 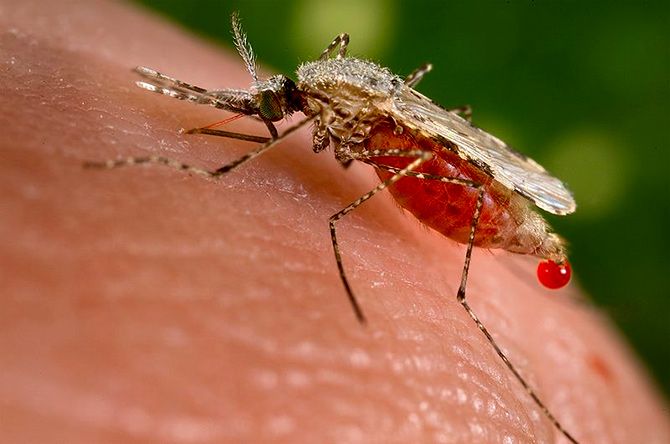 IMAGE: An Anopheles stephensi mosquito obtains a blood meal from a human host through its pointed proboscis. Photograph: Jim Gathany/CDC/Handout/Reuters

On August 15, 1897, an assistant brought him a bottle of water with several about-to-hatch mosquito larvae.

The next day, many of them hatched, and Ross, to his great delight, saw that they were the brown mosquitoes (today we know it as the Anopheles mosquito).

He immediately let them feast on his malaria patient Husein Khan (whom he paid 1 anna per mosquito bite) and recaptured them, looking to dissect them the next day.

By now, Ross had reached a stage where he wasn't dissecting mosquitoes only to observe infected human blood in their stomachs.

He was examining every last bit of tissue -- the gut, the head, the legs -- to see where the plasmodium lodged itself and how it grew inside the mosquito's body. 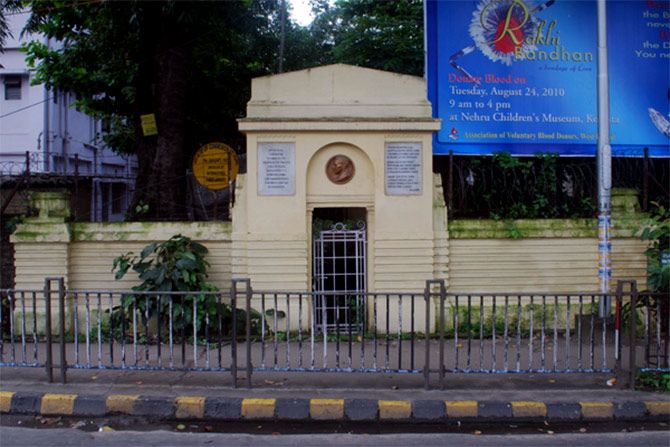 On August 17, he dissected two mosquitoes but found nothing unusual.

On August 19, he dissected one more and found some peculiar circular cells inside the stomach wall, about 10 microns (1 micron is one-thousandth of a millimetre) in diameter.

Could these be plasmodium larvae?

On August 20, a very muggy day in Begumpet, he found that one of the mosquitoes had died.

There were now only two left, and he sacrificed the penultimate one at around 1 pm.

When he looked at the stomach wall of this mosquito, he saw the circular cells again, about twenty-one of them, except this time they had grown to about 12 microns.

The plasmodium was growing in the mosquito's gut!

If the circles were even larger in the last mosquito, which he had put aside to dissect the next day, it would prove his hypothesis!

Ross spent that night in a fever of anxiety, worried that the last mosquito would escape or die during the night, worried that he would find that the cells hadn't grown when he opened it up. 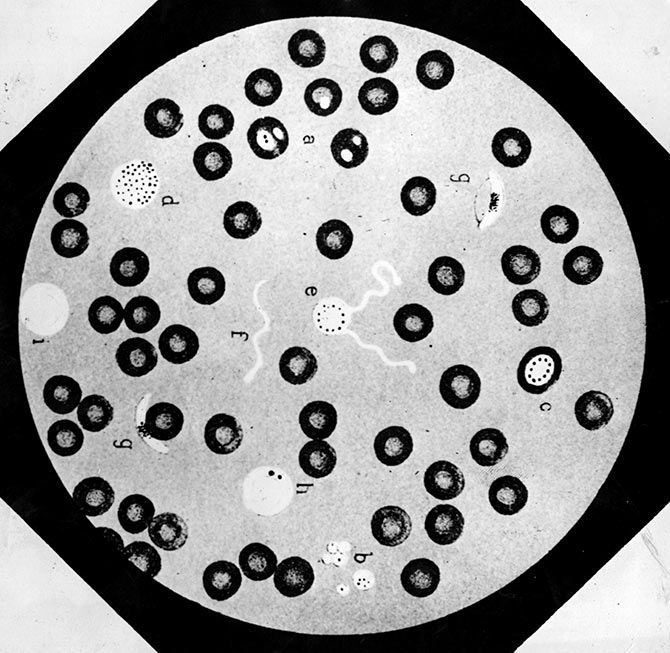 IMAGE: Circa 1893: A view through a microscope of fresh blood, possibly infected with malaria. Photograph: Hulton Archive/Getty Images

His hands barely steady, he dissected the last specimen the next day and put its stomach wall under his microscope.

There they were, all the twenty-one circular cells, and they had grown during the night!

This only proved that whatever was growing in the mosquito's gut was a parasite -- it was almost certainly the malarial parasite, but there was no proof yet.

Nevertheless, it was a huge win.

There was still a lot of work to be done to figure out the entire transmission cycle, but the first door had been opened. 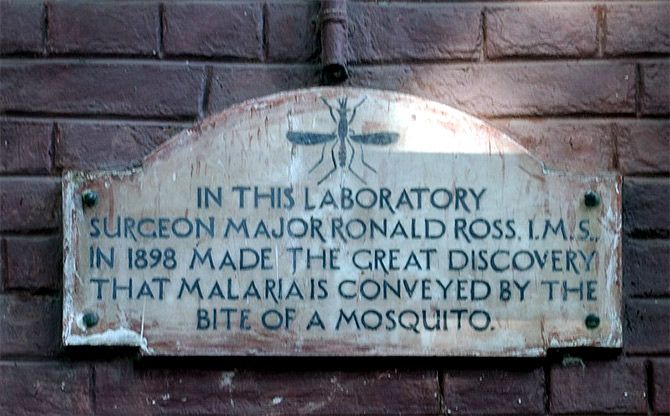 In September, he was transferred to Kherwara in Rajasthan, which had no malaria at all.

He threw an almighty tantrum, threatened to quit the service and was only mollified when Manson used his connections in England to get him transferred to Calcutta's Presidency General Hospital on special duty in January 1898.

There was hardly any malaria among humans in Calcutta either, but Manson persuaded Ross to research the transmission of malaria in birds instead, since bird malaria was plentiful, and was likely to be transmitted the same way as in humans.

With the help of his assistants, the unlettered Mohammed Bux and the science graduate Kishori Mohan Bandopadhyay, Ross began to dissect mosquitoes that had bitten infected birds, discovering that in bird malaria, the mosquitoes in which the parasite grew were his old friends, the Culex mosquitoes. 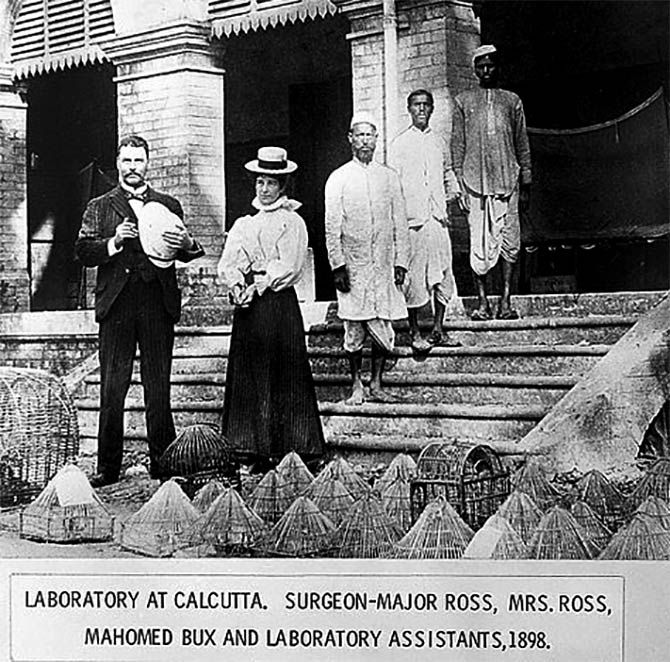 IMAGE: Sir Ronald Ross on the steps of his laboratory in Calcutta, 1898. With Mrs Ross, Mahomed Bux and laboratory assistants in the foreground, cages for malarial birds. Photograph: Kind courtesy Creative Commons

On July 2, 1898, he discovered the typical circular malarial cells in the thorax of a mosquito.

On July 4, when he dissected its head, he found the cells there as well, in the mosquito's salivary gland!

By July 8, he was completely convinced that what he had long suspected was true -- the plasmodium was transmitted through the saliva, when a mosquito carrying it bit a healthy person.

To complete the circle of proof, he sent Mohammed Bux to capture some healthy sparrows and then got mosquitoes that had already bitten an infected bird a few days before to bite them.

All the sparrows developed malaria -- the transmission route had been revealed beyond doubt! 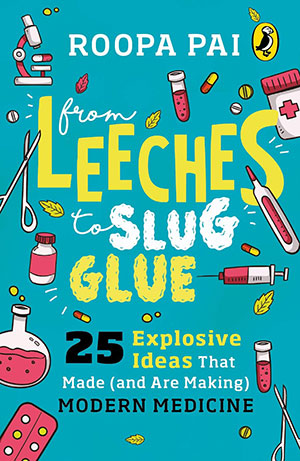 Excerpted from From Leeches To Slug Glue: 25 Explosive Ideas That Made (And Are Making) Modern Medicine, by Roopa Pai, with the kind permission of the publishers, Penguin Random House India. 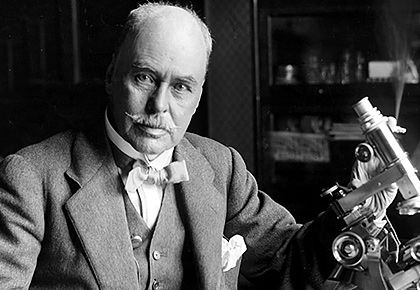 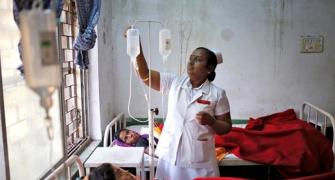 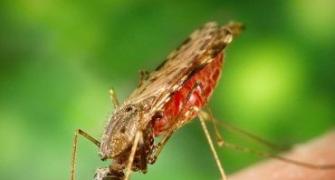 FAQ: All that you need to know about Malaria 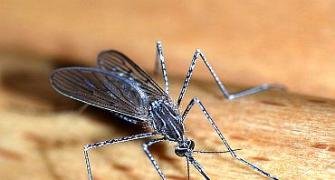 Now, mosquitoes that do not cause malaria 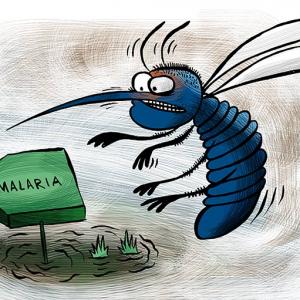 How can India rid itself of malaria? 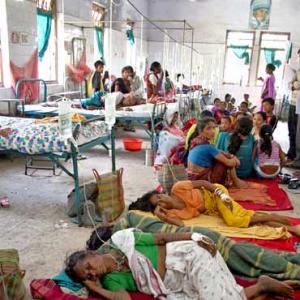