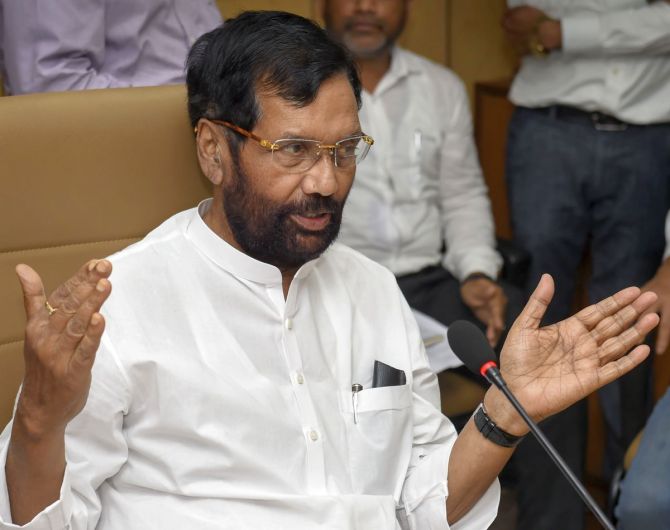 IMAGE: Ram Vilas Paswan, one of the most prominent Dalit leaders of the country who had been a part of several governments headed by rival parties, died on Thursday at the age of 74. Photograph: Shahbaz Khan/PTI Photo

The death of Union minister Ram Vilas Paswan introduced another element of uncertainty in the Bihar assembly poll matrix after his Lok Janshakti Party's decision to fight the election independently had already opened up the race.

Political watchers believe that a lot will depend on how LJP's core Dalit voters relate with his son and political heir Chirag Paswan at a time when the demise of his father is bound to trigger sympathy among them.

A Bihar leader, who did not wish to be named, said the lack of any rival young Dalit leader with state-wide visibility may help the 37-year-old Lok Sabha MP, also the LJP president.

"Much will depend on how Chirag Paswan positions himself. His father had a grassroots appeal and spoke the lingo of the masses. They will now pay more attention to him than ever," he said.

One party which will be wary of any likely impact of the veteran Dalit leader's death on its fortune is chief minister Nitish Kumar-led Janata Dal-United, which was already in the line of LJP's fire over a range of issues.

Only on Thursday, hours before Ram Vilas Paswan breathed his last, the LJP had released a letter his son had written to Bharatiya Janata Party president J P Nadda in which he had accused Kumar of "insulting" his father and claimed that there is a "wave" of disaffection against him among voters in Bihar.

The JD-U chose not to react to the allegations.

The LJP has been projecting itself as a post-poll BJP ally and a strong supporter of Prime Minister Narendra Modi while training its guns on the JD-U, the saffron party's ally in the three phase elections starting from October 28.

Though the BJP has maintained its faith in Kumar's leadership in the state, it will be now doubly cautious in going after the LJP as the prime minister often trusted Ram Vilas Paswan to voice his government's views, at times even informally, over Dalit issues.

The BJP leadership had cultivated him as a trusted ally over the years, and it may not like to sour its relationship with his party, now being helmed by his son, who is also an ardent pro-Modi voice.

Chirag Paswan, serving a second term from Jamui, has already announced that his party will contest on all the seats where the JD-U is in contention but not against the BJP.

The JD-U and the BJP had announced that they will fight on 122 and 121 seats in the polls to the 243-seat assembly.

The JD-U has given seven of its seats to former chief minister Jitan Ram Manjhi's party and the BJP has given eleven from its quota to Vikassheel Insaan Party.

Since its founding in 2000, the LJP has contested the Bihar assembly twice without entering into an alliance with a bigger party and fetched more than 11 per cent votes on both occasions -- in February and then in October of 2005.

The party is banking on anti-Nitish Kumar voters, including those who have traditionally voted for the National Democratic Alliance despite their reservations with the chief minister, to make the contest triangular in most seats it is fighting on.

The death of its popular founder has made things trickier for all concerned.

The NDA and the opposition alliance of the RJD, Congress and the Left have been seen as the main challengers in the polls.

The polls will be held in three phases on October 28, November 3 and November 7, and the counting of votes is scheduled for November 10.

Ram Vilas Paswan, one of the most prominent Dalit leaders of the country who had been a part of several governments headed by rival parties, died on Thursday at the age of 74.

The minister for consumer affairs, food and public distribution was admitted to a private hospital here for several weeks and had recently undergone a heart operation.

Top dignitaries, including Modi, paid their last respects to him at his residence.

The cremation will take place in Patna on Saturday.