Who will walk away into the sunset at the end?
The reigning superstar who has given three mega blockbusters in 2005, 2010 and 2015?
Or the fresh faced son of a former star trying to make a mark for himself, asks Asmita Bihari. 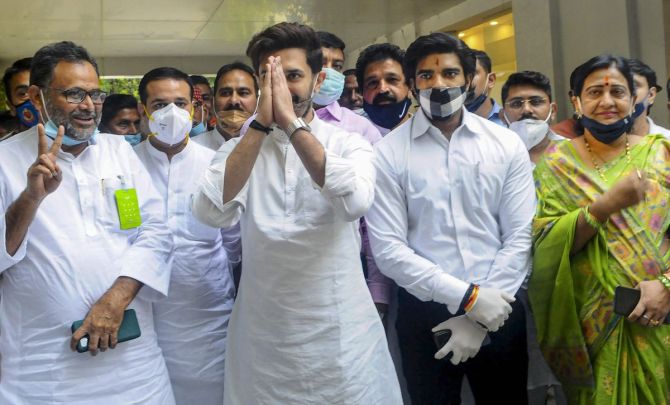 The hard bound script is the first element that is finalised in Bollywood.

Taking the practice forward from his brief time spent in the cinema industry, Chirag Paswan, the actor turned politician, has read the script well and is now creating the storyboard without the help or hindrance of a co-producer.

The president of the Lok Janshakti Party has decided to fly solo and position candidates in 143 seats out of the 243 going to the polls in the Bihar assembly election.

The decision to part ways with the Janata Dal-United, the senior partner in the National Democratic Alliance, with whom the Lok Sabha election was contested last year startled many political pundits.

The reason behind Chirag's decision is assigned to ideological differences with the JD-U.

What are these differences in ideology is a mystery to all.

Moreover, the LJP is not particularly known for any non-fluid ideology. Its ideology conveniently aligns itself to the winning party's ideology post election results.

LJP murmurs of dissent against its coalition partner started soon after the Lok Sabha election and reached a crescendo during the lockdown.

Chirag was displeased with Bihar Chief Minister and JD-U supreme leader Nitish Kumar's handling of the migration movement and his physical absence during the crisis.

But the story line of this drama may have been conceived and written much earlier.

The LJP has nothing to lose.

The result on the 10th of November cannot be worse than the 2 seats that the LJP won in the 2015 assembly election.

By severing ties with Nitish Kumar, Chirag has dealt with any anti-incumbency shadow that may fall on his party being part of the alliance in power.

At the same time, by remaining in association with the Bharatiya Janata Party, he and his party bask in the advantage of being an ally of the central government and, most importantly, using the Modi brand to enhance its ground appeal.

That may also broaden its base and expand its boundaries, which for now is limited to the Dalit and backward classes.

The BJP appeasement policy is likely the reason for the LJP to resist diving into the Hathras case, against the BJP's government in neighbouring Uttar Pradesh.

Being a mute spectator on this burning issue, where every other party seems to be vying for a piece of public attention, could cost the LJP heavily amongst its core Dalit vote base.

Now that the LJP is out of the NDA, which party gets its seats?

The JD-U is laying claim to more seats, as the party which won more seats than the BJP in the 2015 election.

The draft of the Chirag script was possibly built on achieving one main objective.

To ensure that the BJP comes out trumps as the single largest party.

In which case, the BJP has the luxury of making changes during the climax so as to have multiple story ends to the film.

We will have to wait till the end credits roll to see who walks away in the distance in this pot boiler of a movie.

Whether it is the reigning superstar who has given three mega blockbusters in 2005, 2010 and 2015 or is it the fresh faced son of a former star making a mark for himself.