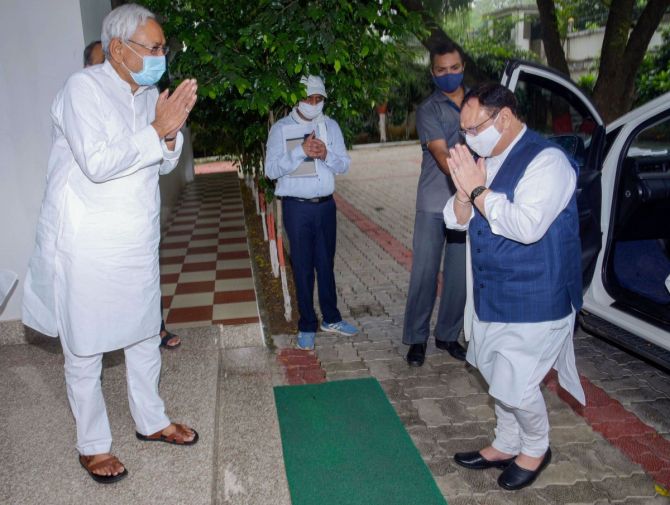 A shower of government largesse will rain down on Bihar in anticipation of the Election Commission announcing the dates for the assembly election in the flood-hit state.

In all probability, this will occur once the inauspicious period of Pitra Paksha ends on Thursday, September 17.

Light showers have already been experienced, courtesy announcements made by the prime minister on the various projects securely treasured for Bihar, the doors of which have been opened at the very last moment to woo the not so gullible Biharis.

This is besides various projects being announced by Chief Minister Nitish Kumar himself.

Rashtriya Janata Dal leader Tejashwi Yadav has already grabbed the heavy cartload of unemployed Bihari youth and promised them jobs; he even launched an online registration site for them.

Approximately 500,000 Bihari youngsters have registered on the RJD site, which seems a paltry number in a state where the unemployment rate is at a staggering 45%.

While the new projects being doled out are welcome, Biharis have not forgotten the promises of old.

The Smart Cities in Muzzafarpur and Patna.

The software technology parks in Bhagalpur and Darbhanga. TCS in Patna (inaugurated, but not generating local employment).

Besides, of course, the illusory special status and package for the state.

We Biharis keep track of all the promises made and make you politicians accountable for it.

Like it was done in the 2015 assembly election when the Bharatiya Janata Party was reduced to 53 seats from the 91 that the party had won in 2010.

This also had a bearing on the reduction of seats for the Janata Dal-United whose seat share fell from 115 to 71.

The BJP-led National Democratic Alliance's core vote bank has historically been upper caste Hindus and some Other Backward Classes.

If a small percentage of the upper caste vote shifts from the BJP -- disillusioned by the losses in business caused by the double strike of the declining economy and the harsh lockdown -- it could affect the NDA's total number of seats won.

The single digit parties of 2015 -- Jiten Manjhi's Hindustani Awam Morcha, the Paswans's Lok Janshakti Party -- could be gamechangers this time.

The Pappu Yadav-led Jan Adhikar Party was formed a few months prior to the 2015 election. Over the last five years, Pappu has done a lot of work amongst the people, specially during the floods and coronavirus crisis. He clearly wants to be the messiah of the OBCs and Dalits in Lalu Prasad's absence from the electoral scene.

It remains to be seen if the Communist Party of India's Kanhaiya Kumar will take up the challenge of leading the Left bloc and improving its score from the 3 seats it won in 2015.

The solid Left base constituencies include Purnia, Begusarai, Madhubani, Jehanabad, Aurangabad and Bhojpur districts where the Communists enjoy both influence and support.

If these parties increase their seats from 2015, then they could tilt the balance between the two alliances -- the NDA and the RJD-led Mahagatbandhan (minus the JD-U and HAM from 2015).

That would mean their stock value going up meteorically for the highest bidder to woo them to their side.

And no prizes for guessing which alliance has the monetary capability and penchant for such trades.

Which brings us to the Indian National Congress, which was reduced to a pathetic 4 seats in 2010.

The Congress managed to win 27 seats in 2015 on the back of the support for the Mahagatbandhan, which then included the RJD and the JD-U.

The Congress was content to playing a subordinate role, agreeing to contest only 40 seats as against the 100 each in favour of the RJD and JD-U in 2015.

The RJD and Congress -- which remain in the 2020 Mahagatbandhan -- have not yet struck a seat sharing deal for the coming election.

With interim Congress President Sonia Gandhi and her son away in the US for medical consultations, a seat share arrangement may take some more time.

Congress apathy towards the Bihar assembly election is clear -- few virtual rallies are being conducted in individual districts with the big guns missing -- and it seems clear that the Congress is resigned to being a minor player in the state once again.

This Navratri could begin with various announcements from the main electoral players.

The seat sharing formulae, candidate lists, party manifestos and more announcements of packages and incentives to entice the voter.

Past elections have proven that the Bihari Buddhi can checkmate anyone who underestimates their wisdom and can clearly see through the smoke and smog. 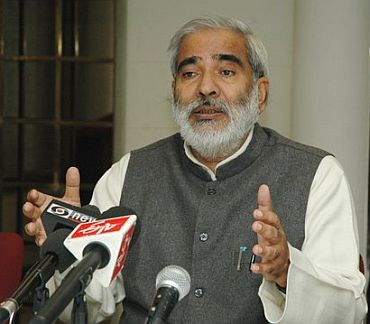