As he snapped ties with the Bharatiya Janata Party, Bihar’s caretaker chief minister Nitish Kumar has once again been pitched as a prime ministerial candidate for the 2024 elections by some, but a majority of the Opposition still view the Janata Dal-United leader with suspicion citing his numerous ‘U-turns'. 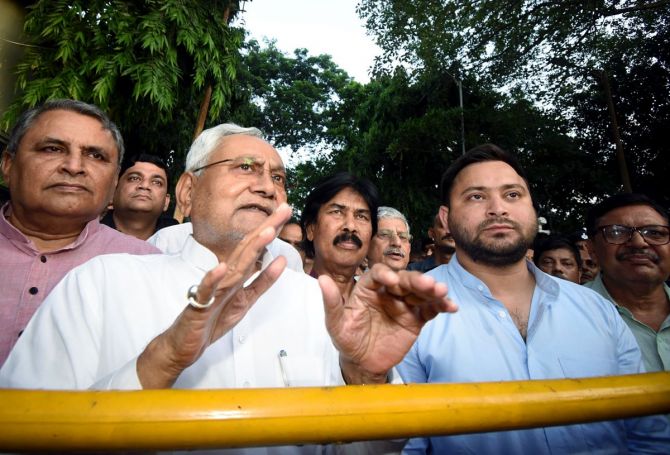 ”If you assess the personalities in the country, Nitish Kumar is eligible to become prime minister. We are not making any claim today, but he has all the qualities of a prime minister,” Upendra Kushwaha, president of the JD-U national parliamentary board said in Patna.

However, Nitish Kumar refused to respond to questions about him being the prime ministerial face in the next Lok Sabha polls as he stepped out of the Raj Bhavan in Patna after resigning as NDA's chief minister.

RJD leader Tejashwi Yadav had derisively named Kumar as "paltu ram", a person who took repeated ‘U-turns', after he walked out of the RJD-JD-U-Congress grand alliance in 2017 and joined hands with the BJP.

In October 2019, Yadav had described Kumar as a "chameleon-like" character and had ruled out any possibility in the future of him returning to the secular alliance fold.

Kumar first became chief minister in 2005 on the back of a campaign against ’jungle raj' of Lalu Prasad's RJD in Bihar. Kumar dumped the BJP in 2013 after Narendra Modi was projected as the prime ministerial candidate for the 2014 Lok Sabha polls.

Kumar then forged a grand alliance with the RJD and Congress and returned as chief minister in 2015. He walked out of the grand alliance in 2017, accusing the RJD of corruption and choking governance in the state.

Shiv Sena leader Priyanka Chaturvedi said Nitish Kumar's political career has been spotless as far as allegations of corruption are concerned, but one thing that goes against him is the number of times he has changed political allies.

"Nitish Kumar has been an ally who keeps changing his mind often. This is one thing that goes against him, the dependability factor," said Chaturvedi, a Rajya Sabha member.

She pointed out that Uddhav Thackeray too had stood against the BJP firmly and run a clean administration during his tenure as chief minister, particularly in the time of Covid-19 pandemic.

"There are worthy opposition leaders and it has to be seen in 2024 how things will shape up," Chaturvedi said.

Left and Trinamool Congress leaders welcomed the development in Bihar but refused to comment on Kumar's prime ministerial chances.

NCP leader Majeed Memon said Kumar could be one of the few people, including Sharad Pawar and Mamata Banerjee, who could be seen as prime ministerial challengers in 2024

"There are some regional satraps. Kumar is also among them. He certainly is a contender. But ultimately, it will be a unanimous decision on who will be the challenger to the BJP," Memon, a former Rajya Sabha member, said.

He acknowledged that Kumar has been accused of changing political allies, but in regional politics such behaviour may not matter much.

"People should be condoning such unsteady stand by Kumar," Memon said.

NCP spokesman Clyde Crasto said though Kumar was often referred to as ’paltu ram' for changing political allies to remain in power, the Bihar chief minister's action of dumping the BJP could be a harbinger of future political realignments.

"It is said that what happens in Bihar politics today, finds expression at the national level in the future. This is the beginning of the end of NDA," Crasto said.

Former JD-U leader R C P Singh, once a close aide of Kumar, said the Bihar chief minister will never become the prime minister, even if he takes seven births.

"There is no limit to Nitish Kumar's ambition. He works neither for Bihar nor his party, but only to further his ambition. He has nursed prime ministerial ambitions.

“However, there is no vacancy for the prime minister and India has also got a very good President and vice president,” Thakur said.

The BJP leader said a web series -- 'Paltu Ram Part 1, Part 2 and Part 3' -- could be made on Kumar's political somersaults.

"Nitish Kumar will be more of an acceptable face for a joint opposition candidate compared to Mamata Banerjee in 2024. To defeat the BJP, you have to either change the rules of engagement or beat them at their own game," suspended Congress leader Sanjay Jha said. 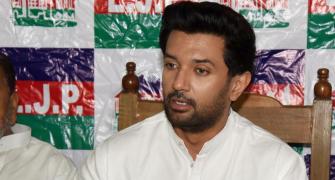 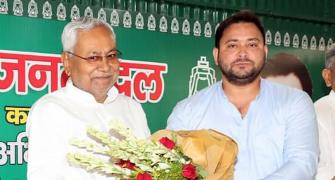 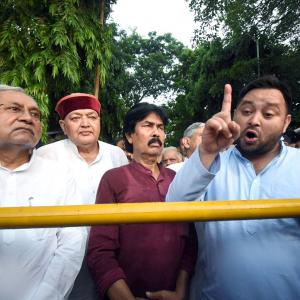 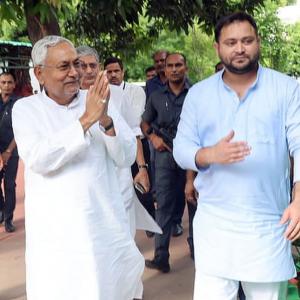