The Supreme Court said on Monday that people have a fundamental right to protest against a law but the blocking of public roads is a matter of concern and there has to be a balancing factor. 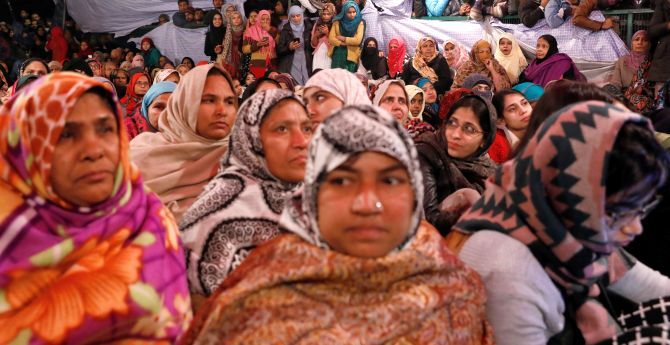 IMAGE: The protesters at Shaheen Bagh have been sitting-in since December 15, blocking traffic flow on the Kalindi Kunj-Shaheen Bagh stretch. Photograph: Adnan Abidi/Reuters

Blockade of public road at Shaheen Bagh is "troubling us", the Supreme Court said on Monday and suggested that the anti-Citizenship Amendment Act protesters go to another site where no public place would be blocked.

The apex court asked senior advocate Sanjay Hegde to "play a constructive role as an interlocutor" to persuade the protesters to move to an alternative site.

People have a fundamental right to protest "peacefully and lawfully" but blocking public roads and places is a matter of concern as it might lead to "chaotic situation", the apex court said, stressing that there has to be a "balancing factor".

"Democracy works on expression of views but there are lines and boundaries for it," a bench of Justices S K Kaul and K M Joseph said, adding, "The question which is arising is where to protest."

"Our concern is if everybody starts blocking public areas then where will it end," the bench asked, while hearing pleas seeking removal of protesters from Shaheen Bagh and ensuring smooth traffic flow in the area.

"There must be a balancing factor," the bench said, adding, "Blocking of public road is troubling us".

It said Hegde can take assistance of advocate Sadhana Ramachandran and former Chief Information Commissioner Wajahat Habibullah for talking to the protesters.

Solicitor General Tushar Mehta, appearing for Delhi government and Delhi Police, told the court that the solution is to remove these protesters from the site.

"We will not go that far but the problem is that they (protesters) are keeping children and women as shield. We have held a series of meetings with the local resident welfare associations, priests of mosques there and we are trying to persuade them that this is not the way to keep entire city to hostage under the garb of protest," Mehta said.

When the bench asked Hegde to talk to protestors, Mehta said, "Let a message not go that every institution is kneeling on its knees in trying to persuade them... I do not want a message to go that we are praying to them to remove".

The bench, however, observed, "We want to solve the problem and we have expressed our opinion. If nothing works, we will leave it to the authorities to deal with the situation".

The bench also asked Mehta whether an alternative site can be given to the protesters to hold their agitation.

"It is unfortunate that we have to make designated area for protests like Jantar Mantar. We have so many professional protesters," Mehta said.

"It is important to allow people to protest," the bench said, adding, "The right to protest is recognised world over, more particularly in India. There is a fundamental right to assemble peacefully to protest".

At the outset, the bench said people or any section of the society have a right to protest against a law and they also have the right to express their grievance against it.

"Whether traffic flow can be managed from here or there is not the issue. Today, it is protest against a legislation. Tomorrow, there may be protest against different legislation. The issue is if people start blocking roads and public places, what will happen then," the bench said and posted the matter for hearing on February 24.

The bench also dealt with an intervention application filed by Bhim Army chief Chandra Shekhar Azad and two others, including Habibullah.

The counsel appearing for the intervenors told the court that protest has been going on and it is not that people of only one faith are agitating there.

The bench said a "lot of heat" has been generated on the issue and protesters have made their point as the agitation is going on for quite some time.

When the bench was informed that children were not able to go to schools due to the protest, the bench said, "There must be a balancing factor. You may protest, may be, somewhere else. If this (blockade of public place during protests) applies to other places, this may lead to chaos".

"Somebody who may not be on the same page as you may get an idea to start a protest somewhere else? Then where do we end?" the bench said adding, the people may "emulate" Shaheen Bagh also.

"It is not a pleasant task which we have taken upon ourself," the bench said, adding, "It should have been done by the executive".

The top court also said in an age of social media, there is a tendency for anyone to go overboard.

When the bench asked Hegde to talk to protesters, the senior advocate said he would be glad to assist retired apex court judge Justice Kurian Joseph on this.

At this, Mehta said a former judge of the top court should not be asked to persuade protesters.

The counsel for one of the petitioners said interim directions should be passed so that school vans and ambulances could be allowed to ply on the road which has been blocked by the protesters since December 15 last year.

Restrictions have been imposed on the Kalindi Kunj-Shaheen Bagh stretch and the Okhla underpass, which were closed on December 15 last year due to protests against CAA and National Register of Citizens.

The apex court was hearing an appeal filed by advocate Amit Sahni, who had approached the Delhi high court seeking directions to Delhi Police to ensure smooth traffic flow on the Kalindi Kunj-Shaheen Bagh stretch, which was blocked by anti-CAA protesters on December 15 last year.