In this winter of discontent, in every procession, in every demonstration, in every protest -- from Jawaharlal Nehru University to Jamia to Shaheen Bagh to the streets of Mumbai -- the front rows have been occupied by women.

It’s been weeks since women have been sitting in protest across the country against the newly-introduced Citizenship Amendment Act and the proposed National Register of Citizens. The protests are a nerve-centre of unwavering voices against what has been perceived as a discriminatory law.

The women -- some housewives, some students with hijabs covering their heads, and others in full-length burqas -- are rallying against the 'Man', in what could also be perceived as a revolution for the 'weaker sex' in India.

Here’s a glimpse of some of the wonder women.

The women of Shaheen Bagh have won the admiration and hearts of many for braving the harshest Delhi winter just to make their voices heard against the Citizenship Amendment Act. 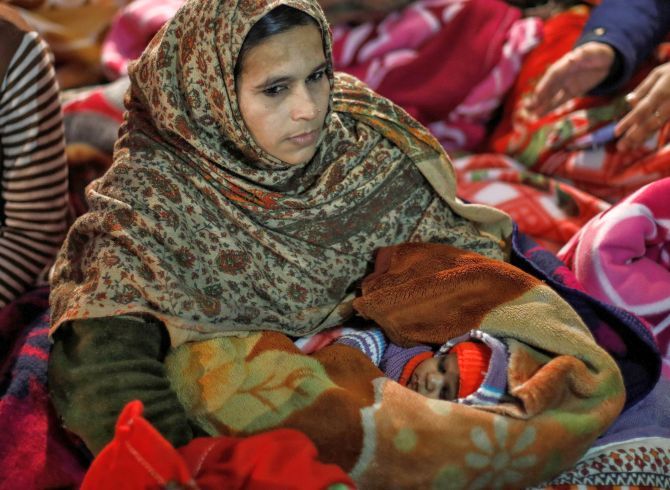 IMAGE: Rehana Khatoon, 28, holds her 20-day-old baby as she takes part in a protest against the new citizenship law at Shaheen Bagh. Photograph: Danish Siddiqui/Reuters

Even though locals in the area are now getting fed up of road closures caused by the sit-in, the women refuse to budge, saying they will continue to sit there and agitate. 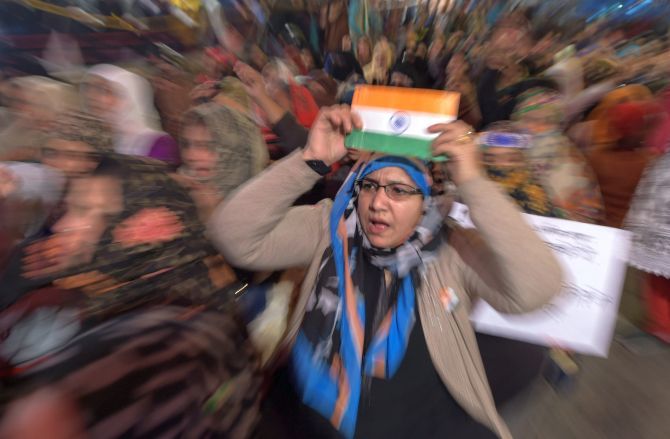 IMAGE: Women have been gathering at Shaheen Bagh for over a month, singing songs and chanting slogans of freedom. Photograph: Vijay Verma/PTI Photo

One of the women told a news channel that they don’t care that no political leader has come to address them. “Neither Kejriwal nor any other politician will come. So we found our own voice. After all, what do politicians care about unemployment, or women sitting here in the bitter cold day after day? It makes no difference to their lives. We know we have to stop depending on those leaders," one of them was quoted as saying.

Jamia, JNU and other colleges in Delhi

While Shaheen Bagh has witnessed peaceful protests, the same cannot be said of universities in the national capital.

And once again, it has been the women who have emerged as heroes. 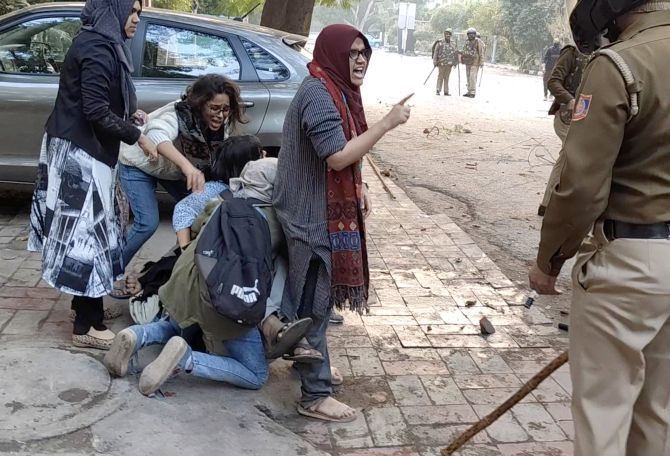 IMAGE: Women form a human shield around a man beaten by the police during protests against the new citizenship law, at Jamia Millia Islamia University in New Delhi. Photograph: Ghulam Hussain/Reuters

In mid-December, Jamia Millia Islamia University turned into a battlefield after police and students, who wanted to march to Parliament House to protest the amended Citizenship Act, clashed with each other.

Following the police action, a video of two hijab-clad women trying to save a male friend from getting beaten up has been going viral. The girls -- Ladeeda Sakhaloon and Aysha Renna N -- have since become the face of the Jamia protests.

While some condemned the police's brutality, others praised the brave women who protected their fellow agitators.

The police action quickly led to anger among students in the national capital, bringing them out on to the streets. The students have been unabashed in their protests and have refused to cow down to authority. 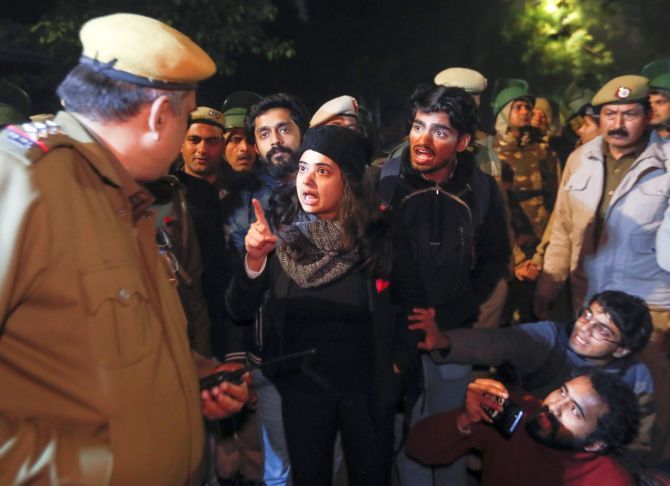 IMAGE: A female student argues with a police officer while agitating against police excesses against Jamia students and the CAA in New Delhi. Photograph: Adnan Abidi/Reuters

Inspired by the Shaheen Bagh protests, a group of women are staging a continuous protest against the Centre’s new citizenship laws since January 7 at Kolkata’s Park Circus Maidan. 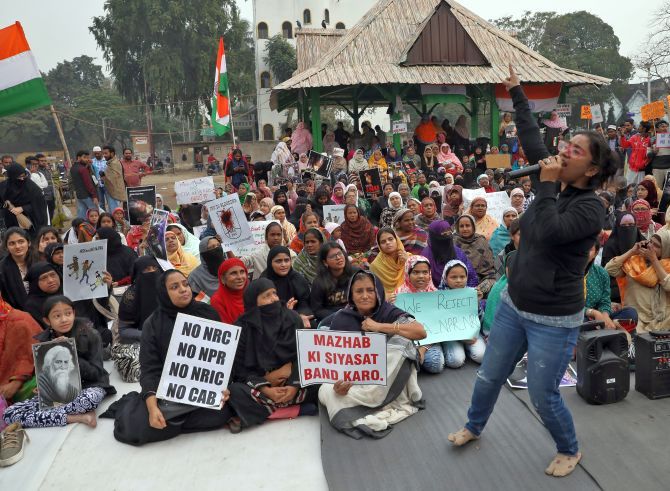 IMAGE: A demonstrator shouts slogans as she, along with other demonstrators, attends a sit-in against the new citizenship law, at Park Circus Maidan in Kolkata. Photograph: Rupak De Chowdhuri

Hundreds of women, some with their children, gather every day with posters and placards. Over time, the residents of Park Circus have been joined by others from across Kolkata. 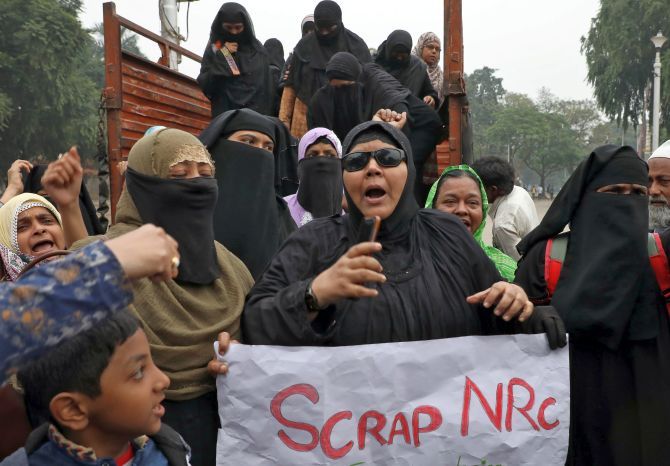 IMAGE: Demonstrators have been sitting at Park Circus Maidan in Kolkata since January 7. They say they will continue to do so at least till January 22, when the Supreme Court is scheduled to hear petitions challenging the CAA. Photograph: Rupak De Chowdhuri/Reuters

For a majority of the protesting women, this is their first time participating in a protest. The protestors say they intend to be on an indefinite sit-in, until at least January 22, when the Supreme Court is scheduled to hear petitions challenging the CAA.

There is no single organisation visibly spearheading the protests. The participants told me that the ordinary public is leading the movement, and that the only banner they are protesting under is the Indian flag.

In Bengaluru, the Women India Movement collective organised a protest against the CAA and the proposed NRC in front of the Town Hall and according to reports, some 500 protestors gathered at the venue. 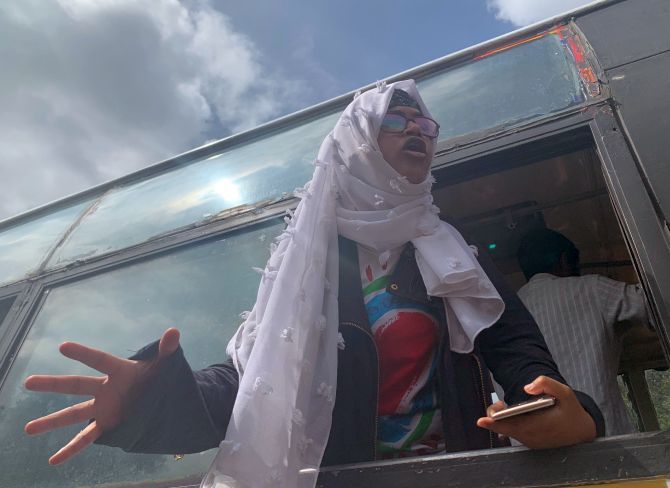 IMAGE: A demonstrator shouts slogans after she was detained during a protest against the new citizenship law, in Bengaluru. Photograph: Nivedita Bhattacharjee/Reuters

The large crowd present erupted in chants of “Hum ladhke rahenge (we will keep fighting)".

Several prominent citizens were also present at the protest, including anti-AFSPA activist Irom Sharmila, who reached the protest with her twins. 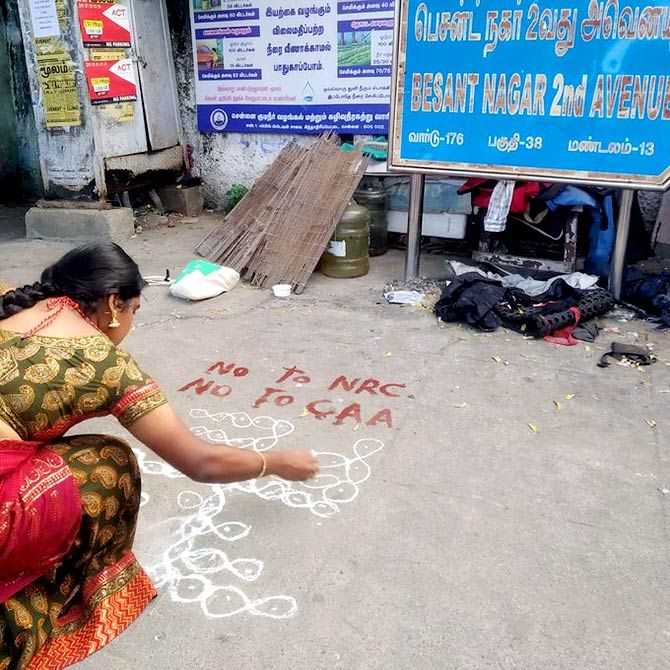 On December 29, 2019, when a few women in Besant Nagar, south Chennai, drew kolams outside some homes, the daily Tamil traditional erupted into a tool of protest against the Citizenship Amendment Act 2019.

Seeking to nip the protest in the bud even as it threatened to go viral, the police arrested eight residents including five women for the act. The Opposition Dravida Munnetra Kazhagam was quick to pick up the trend, and its leaders tweeted photographs of protest-laden kolams outside their homes. And it was only a matter of time before #kolamagainstCAA started to trend. 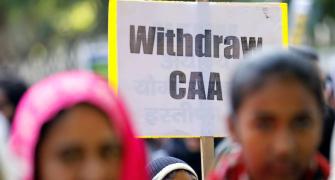 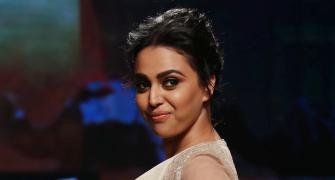 Must read: When Swara Bhaskar confronted her stalker