'Not afraid to look Muslim, not shy of flaunting her nationalism.'
'With a willingness to fight carrying the Constitution, the Flag, the Anthem, Ambedkar, Gandhi and the chant of 'Hindustan Zindabad',' notes Shekhar Gupta. 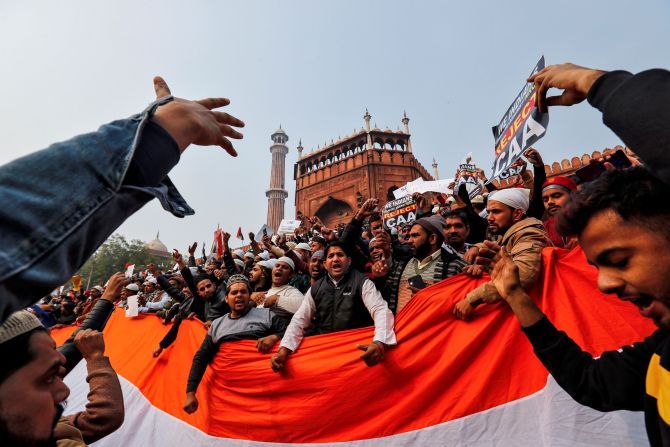 IMAGE: A protest against the Citizenship (Amendment) Act at the Jama Masjid in Delhi. Photograph: Danish Siddiqui/Reuters

This Republic owes a huge debt of gratitude to celebrity writer-activist Arundhati Roy.

She did it when she described our Maoists as 'Gandhians with Guns'.

It was a great quotable quote forever.

It also buried whatever little sympathy the Maoists might have had as underdogs.

As the oldest truism goes in marketing, nothing fails faster than an obvious lie.

You couldn't be both Gandhians and Maoists at the same time.

Watching the pictures from the steps of Delhi's Jama Masjid, a brisk 15-minute walk or one metro station away from where I sit and write this on Bahadur Shah Zafar Marg, I'd wonder how she would have described thousands of Muslims spilling over Jama Masjid's 17th century steps.

We underline this since our prime minister just indicated that what clothes people wear signal their intentions.

They are 'armed' with the Tricolour, the Constitution, many framed portraits of Babasaheb Ambedkar, some of Gandhi, chanting Jana Gana Mana and 'Hindustan Zindabad'.

In the classical Left-liberal worldview, flaunting aggressive symbols of nationalism, the flag, the anthem and assertion of national identity are symptoms of exaggerated majoritarian nationalism, and the last step before jingoism.

What happens when the Republic's largest minority (one out of six to seven Indians) comes out on the steps of their holiest mosque to pronounce they are Indians first, believe in the Constitution, the Flag and the Anthem, and reject the idea that someone could now reimagine the basis of the Republic, whatever his majority.

Think hard to understand what has changed in India.

The Muslims are questioning the majority's first claim to Indian patriotism.

They are also saying something immigrants, dominated by those from India, chanted in Britain four decades ago when racism grew rampant: Come what may, we are here to stay.

No one can fight them.

No one can open fire at them with any justification.

Our country has changed.

You cannot even convince them of the nuance between the CAA and NRC, the citizen and the refugee.

You've said too much already, especially with the 2021 West Bengal election in mind.

You had gone out to achieve two things.

One, retrospectively protect the Bengali Hindus caught in the NRC net in Assam, expel Bengali Muslims.

And two, impress Bengali Hindus in West Bengal with the promise of a repeat.

In trying to put out a fire in Assam, and light another one in West Bengal, you now have the flames in Delhi.

The Jama Masjid is just about 7 km from Rashtrapati Bhavan, it is supposedly under Section 144.

See who is defying it and how.

Clothes -- caps, burkhas, hijab, the colour green -- have been the most visible aspect, and stereotype, about Muslims.

One such was picked up from the Facebook page of one of the two young women who drew nation-wide notice for saving a male friend by coming between him and police lathis.

The implication was, along with some other scribbles, that she is driven by orthodox Islam, not nationalism or any commitment to secularism.

There's been an even stronger symbolism of the angry Muslim, represented by the AK-47, RDX, the many Mujahideen and Lashkars, al-Qaeda and ISIS.

Those angry Muslims are also easy to fight and defeat.

Just as this column is written, a Jaipur court has sentenced four such to death for serial blasts there.

For almost three decades now, the concern has been: What if the Muslims get really frustrated and take to terror?

Tiny groups, from SIMI to the Indian Mujahideen, have confirmed this notion.

Even someone as liberal and far-seeing as Dr Manmohan Singh had said to a hall full of senior journalists at his 2009 election-time interaction at New Delhi's Constitution Club, that anyone complaining about special facilities for the Muslims, should be aware that even if 1 per cent of India's Muslims (about 200 million now) decided that that there was no future for them in India, the country would become ungovernable.

That was the flavour of the UPA decade. India had to be generous to Muslims so they won't go rogue.

Some young Muslims, in the odd pocket, did take to terror.

The UPA put these down as firmly as the NDA might today.

The Batla House encounter, in the heart of the troubled zone of Jamia Millia, was one such.

There can be many interpretations of these facts.

But the conclusion would be the same.

One side felt sorry for the Muslims and wanted to do something to 'assuage' them so they won't turn anti-national.

The other wanted both eyes for an eye, and even countenance terrorist vigilantism from the majority.

Both agreed on viewing the Muslims with suspicion.

The other negative about Indian Muslims was their clergy -- the Bukharis of Jama Masjid, the Madanis, the sundry beards who would appear on commando-comic channels issuing or defending one nutty fatwa or the other.

There are so many of them, you could always find a Bukhari or a Madani to take a position for and against anything.

Check out the Babri-Ayodhya judgment, for example.

Or a Bukhari pronouncing that the CAA-NRC was no threat to Muslims.

He wouldn't dare to come to the pulpit in the mosque he is the custodian of and say this to the thousands on its steps.

A perfect world has not been achieved yet.

But most of these negative images have been challenged today.

With Jana Gana Mana in place of the kalma, the Tricolour, not the green, for a flag, pictures of Ambedkar and Gandhi and not Ka'aba, and 'Hindustan Zindabad.'

The one thing not changed is the 'clothes'.

As we said earlier, these are Muslims dressed like Muslims.

They are reminding us there is no contradiction between how an Indian dresses and her patriotism or what the Constitution owes her as a citizen.

That larger stereotype is being broken by persisting with a smaller one.

Those who see the Indian Muslim in the usual 'Clash of Civilisations' binary make a terrible blunder.

In 1947, a majority of Indian Muslims walked away with Jinnah into their new nation, Pakistan.

In the 72 years since Jinnah, they've never trusted a Muslim as their leader.

It's always been a non-Muslim.

It isn't a perfect world yet because not everybody is as measured and astute as those on the steps of the Jama Masjid.

Cars have been burnt in old Delhi's Darya Ganj, abutting the Jama Masjid.

Uttar Pradesh, Karnataka, Gujarat are all seeing violent elements and West Bengal remains one spark away from a return of violence and arson.

But none of this can put in the shade the change India's Muslims have signalled in Delhi.

They are signalling the rise of a new Indian Muslim.

Not afraid to look Muslim, and not shy of flaunting her nationalism.

With a willingness to fight carrying the Constitution, the Flag, the Anthem, Ambedkar, Gandhi and the chant of 'Hindustan Zindabad'.

The immortal words of Urdu poet Rahat Indori are being quoted often in these fraught days: Sabhi ka khoon shaamil yahan ki mitti mein, kisi ke baap ka Hindustan thodi hai (Everyone has shed their blood on this soil, nobody can claim exclusive right over India).

He must be smiling.

With special arrangement with ThePrint.

Shekhar Gupta is the editor-in-chief, The Print.