News
Business
Movies
Sports
Cricket
Get Ahead
Money Tips
Shopping
Sign in  |  Create a Rediffmail account
Rediff.com  » News » What's it like to be in disconnected Kashmir

An eerie silence prevails with concertina wire barricades laid on deserted streets and police and armed forces personnel allowing civilians to move only after thorough checking. 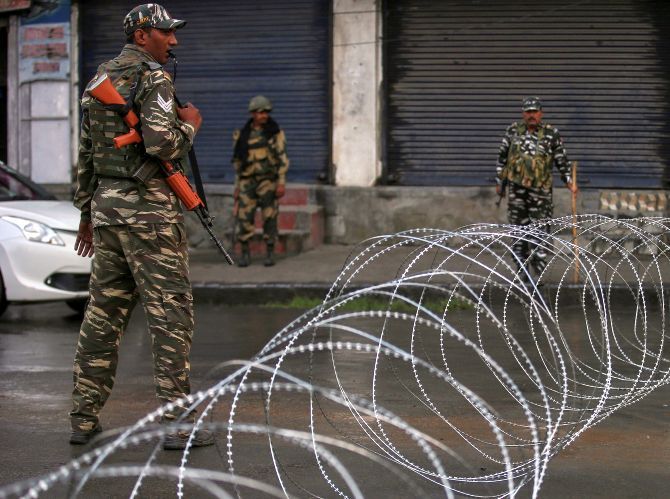 An eerie silence prevails in the city with concertina wire barricades laid on deserted streets and police and armed forces personnel allowing civilians to move only after thorough checking, although there is no official curfew.

Days after the Centre's announcement to scrap special status for Jammu and Kashmir and split it into two Union territories, people remained confined mostly indoors amid uncertainty as communication links have been snapped by authorities to prevent any disturbances.

The 'undeclared curfew' has left many people confused and nervous. Amid the restrictions, an unfortunate incident took place in Noorbagh on the outskirts of the city.

Central Reserve Police Force personnel chased a group of youths who had assembled in the locality and one of the youths who jumped into river Jhelum to escape the wrath of the armed paramilitary forces drowned, officials said.

There was a protest in the locality but it ended after baton charge in which six people were injured, the officials said.

National Security Advisor Ajit Doval reviewed the situation and was seen in a video clip having lunch with a few people in Shopian district.

People with only urgent work are being allowed to move in the city. They are being subjected to intense checking repeatedly at force pickets where uniformed personnel have discretion to allow them passage or turn them back. 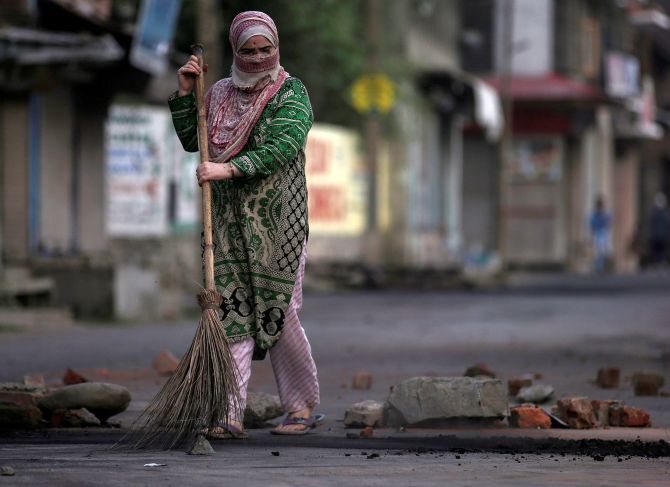 IMAGE: A woman removes pieces of stones and bricks from a road during restrictions after the government scrapped special status for Kashmir, in Srinagar. Photograph: Danish Ismail/Reuters

In the absence of any public or private transportation, locals are resorting to taking lift to reach the airport.

Aadil Dar, a systems engineer at a multi-national company in Gurgaon, is returning from the Valley to join duties after a brief visit to his parents here.

With no private or public transport available, he was walked towards Srinagar airport, nearly 14 km from SrinagarCity centre, with his luggage trying to get a lift.

"I had come for a brief visit before Eid. I knew it will be difficult to be with them during Eid. I could not find any transport to the airport. So I decided to walk," he said.

There is complete restriction on information flow -- telecommunication facilities like data, voice and land line.

"We do not know how long this will continue. There is no way we can know the welfare of our near and dear ones. There is no contact with anyone from outside Kashmir or even within the city," said Imtiyaz Beigh, manager of the hotel, who wants to know about his family in the border town of Kupwara. IMAGE: Cops stand guard behind a roadblock along a deserted street during restrictions. Photograph: Mukesh Gupta/Reuters

People were seen lined up outside the pickets trying to argue with the soldiers and paramilitary personnel to let them pass. Some have medical conditions, some have to reach the airport, some have to purchase essentials.

The personnel are checking and verifying documents, identity cards, with some unlucky ones being turned away.

The authorities have not imposed curfew in the city but Section 144 of CrPC which prohibits assembly of five or more persons in an area is being "strictly imposed", an official said.

Any public movement except in extremely needy cases has been barred and all educational institutions are closed, the official said. 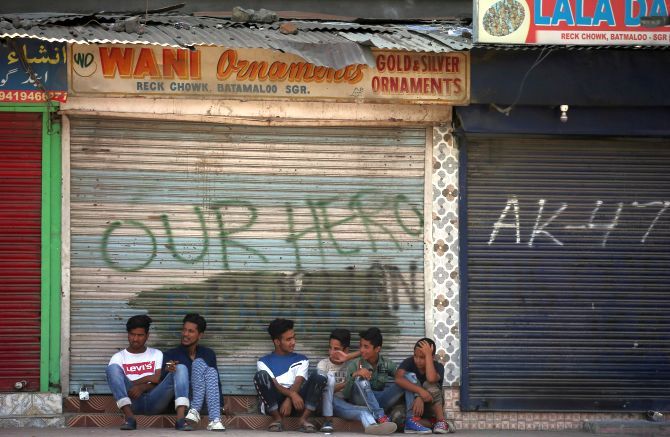 Political leaders including former chief ministers Omar Abdullah and Mehbooba Mufti have been put up in Hari Niwas, which has been turned into a makeshift 'detention centre'. Former MLA from Srinagar, Ali Mohammad Sagar, is also in detention at the building.

Scores of activists from mainstream political parties National Conference and Peoples Democratic Party have been detained at another makeshift detention centre at Sher-e-Kashmir International Convention Centre while from those from other parts of the Valley have been brought to such centres in Gurez and Baramulla.

Parliament on Tuesday approved a resolution abrogating special status to Jammu and Kashmir under Article 370 of the Constitution and a bill for splitting the state into two union territories.

The bill to create two UTs -- Jammu and Kashmir, and Ladakh -- was passed by 370 votes in favour and 70 against. Modi was present in the House. 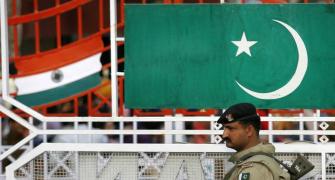 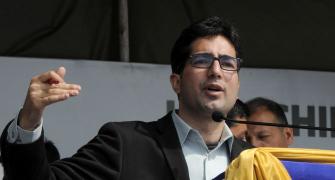