The new legislation on J&K puts a cloud over the state’s constitution, through which the state became 'an integral part’ of India, says David Devadas. 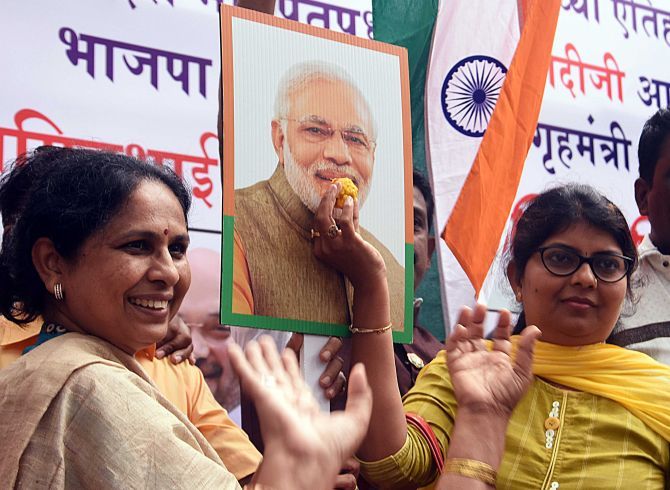 IMAGE: BJP activists celebrate the scrapping of Article 370 from Jammu and Kashmir, in Mumbai on August 6, 2019. Photograph: ANI Photo

The new legislation on J&K puts a cloud over the state’s constitution, through which the state became `an integral part’ of India, says David Devadas.

The government has undermined the vital document that makes Jammu and Kashmir an `integral part of’ India by gratuitously dividing the state into two Union territories.

That document is the constitution of Jammu and Kashmir.

Article 4 of the state constitution holds that: `The territory of the state shall comprise all the territories which on the fifteenth day of August, 1947, were under the sovereignty or suzerainty of the Ruler of the State.’

It is the entity of the composite state of Jammu and Kashmir which maharaja Hari Singh acceded to the Union of India.

His covering letter made that accession conditional, saying it was limited to defence, foreign relations and communication. The constitution of the state cemented the link. It was finalised in 1956 and took effect on 26 January 1957.

Article 3 of the state constitution says: `The State of Jammu and Kashmir is and shall be an integral part of the Union of India.’

By egregiously undoing the entity of the state and dividing it into two Union territories, the government’s legislation has put a question mark over the state constitution -- and hence the stamp of approval on the integration of the state with India.

It was after the constitution took effect that Union Home Minister GB Pant first used the term `integral part of India’ in Parliament with regard to the state. Also in 1958, the UN Representative stopped trying to sort out the dispute over the state between India and Pakistan.

Articles 6 to 9 of the state constitution, and their various sub-clauses, define permanent residents. Article 10 guarantees to them all rights available to citizens of the rest of India.

By doing away with Article 35-A of the Indian Constitution, the government wants to end that categorisation. The BJP -- and its predecessor, the Bharatiya Jana Sangh -- have repeatedly vowed to have an undifferentiated Indian citizenship across the land. This has been a core objective of its politics.

The problem is that the category of permanent resident of the state is not only in Article 35-A but also in these articles of the state constitution as well as the maharaja’s proclamation of 1927, through which the category was created.

That perhaps is why the government felt the need to undermine the state constitution’s validity.

That is not the only reason, though. The state’s separate constitution has been a bugbear for the party ever since the inception of the BJS in 1950.

The Jana Sangh’s founder, Syama Prasad Mookerjee, gave the slogan, `Ek vidhan, ek pradhan, ek nishan' (one law, one head of government, one flag) to oppose a separate flag and constitution for this state.

BJP ministers did not fly the state flag on their vehicles or in their offices when the PDP-BJP coalition was first formed in 2015. The government headed by Mufti Mohammed Sayeed circulated an order that the flag must be used. The new legislation will finally do away with a separate flag -- and presumably, the constitution too.

Scrapping Articles 35-A and 370 were bound to be controversial, even though it was only a matter of time ever since the BJP included the move in its national manifesto before the recent Lok Sabha elections.

Combining the removal of those Articles with downgrading the state to two Union territories is like rubbing the collective Kashmiri nose in the mud.

Separating Ladakh from the state without consulting the people or politicians of the state will be unsettling to many citizens in the Valley. However, a number of them would have accepted it as fulfilling a demand from residents of Leh district (though not many in the equally large Kargil district of Ladakh).

But the government has not stopped with separating Ladakh. It has downgraded the rest of the state into another Union territory. This will be seen by many residents as an egregious humiliation of the people of the Valley, who tend to see themselves as primary stakeholders in the affairs of the state.