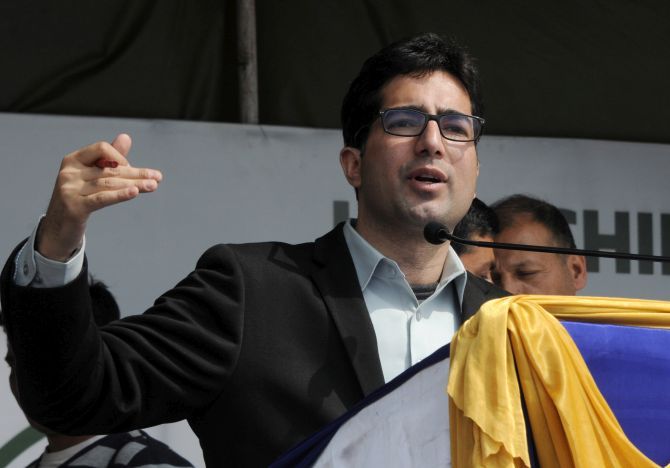 Kashmir is experiencing an 'unprecedented' lockdown and its eight million population 'incarcerated' like never before, former Indian Administrative Service officer and politician Shah Faesal said on Wednesday, adding that there is no shortage of food and essentials as of now.

It was not possible to reach former Jammu and Kashmir chief ministers Omar Abdullah, Mehbooba Mufti and Jammu and Kashmir People's Conference' Sajad Lone or send a message to them, Faesal said in a Facebook post as information from the Valley continued to come out in driblets.

Parliament has given its nod to abolish the special status granted to Jammu and Kashmir under Article 370 and also to bifurcate it into the union territories of Jammu and Kashmir, and Ladakh.

There's a virtual blackout in the Valley with few workable mobile phones and internet connections and prohibitory orders in place.

"Kashmir is experiencing an unprecedented lock-down. From Zero Bridge to Airport some movement of vehicles is visible. Other places are completely out of bounds. Except for patients or those with a curfew pass," Faesal, the president of the J&K Peoples Movement party, said in a Facebook post.

Giving a glimpse of the ground situation in Kashmir, the Srinagar-based politician said curfew is stricter in other districts.

"You can say that the entire 8 million population has been incarcerated like never before," Faesal, who had topped the civil services exam in 2010, said.

As of now, there is no shortage of food and essentials.

"My sources in administration told me that Sat Phones given to officers are being used to coordinate the civil supplies. No other means of communication is available.

"Those with Dish TV have access to news. Cable services are down. Many people still have a bleak idea of what happened. Radio was working till a few hours ago. Most people are watching DD. National media is also not being allowed to move into interior areas," he claimed.

The Lal Ded hospital, Faesal claimed, is functioning beyond its capacity as expecting women are getting admitted days in advance to avoid any last moment hassles. Some people are planning to run 'langars' there.

No violent incident has been officially reported so far, he added. Random incidents of stone throwing were reported from Rambagh, Natipora, Downtown, Kulgam, Anantnag. But no news of any killings, he said.

"People are in shock. Numb. Yet to make sense of what befell them. Everyone is mourning what we lost.

"In my conversations with people besides 370, it's the loss of statehood that has hurt people deeply. This is being seen as the biggest betrayal by the Indian state in last 70 years," he said in the Facebook post.

Few leaders who have escaped detention called for calm through TV channels, he said.

"It is being said that the government is ready for a casualty figure of 8-10 thousand. So sanity demands that we don't give anyone a chance for mass massacre," he alleged.

"My appeal has also been that let's stay alive, then we shall fight back," the former civil servant said.

Faesal claimed that the body language of security forces manning the areas is 'extremely harsh' and Jammu and Kashmir police has been 'totally sidelined'.

"One guy told an acquaintance of mine that now we are going to show your place to you," he alleged.

"Such stories of locals being bullied have reached me from many places. But its extremely heartening that Kashmiris are staying calm," he said.

Faesal also advised people to avoid travelling to Kashmir for some time, saying the situation will remain extremely volatile even if the curfew is relaxed.

"At airport I met crowds of heartbroken youth asking me questions about what should we do now. I said we shall go to Supreme Court together and ask for reversing this injustice.

"All political parties are together on challenging these unconstitutional laws that have deprived us of our history and identity," he said, adding that as of now that is the only hope.

He also accused the international community of closing its eyes on Kashmir.

"So I am not expecting anything from there. The sad fact of life is that only (Prime Minister) Narendra Modi and (Union Home Minister) Amit Shah can one day give back to us the wealth that has been stolen from us in broad day light.

Mehbooba and Abdullah were under house arrest and then placed under arrest on Monday night as they were considered a threat to the law-and-order situation in the state, officials said. 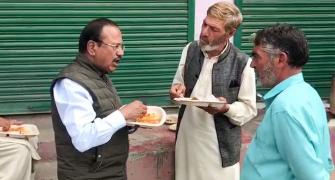 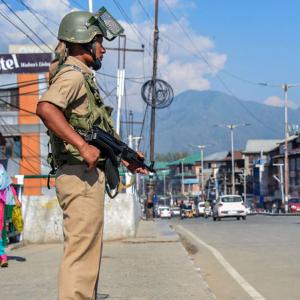