Agitating farmer groups on Thursday held a four-hour nationwide 'rail roko' agitation with the railways saying there was negligible impact on services though some trains were stopped by officials at stations as a precautionary measure. In Punjab and Haryana, farmers at several places squatted on railway tracks which led to disruption in normal movement of trains on some routes.

Protests were also staged at some places in Uttar Pradesh, Maharashtra and Karnataka. 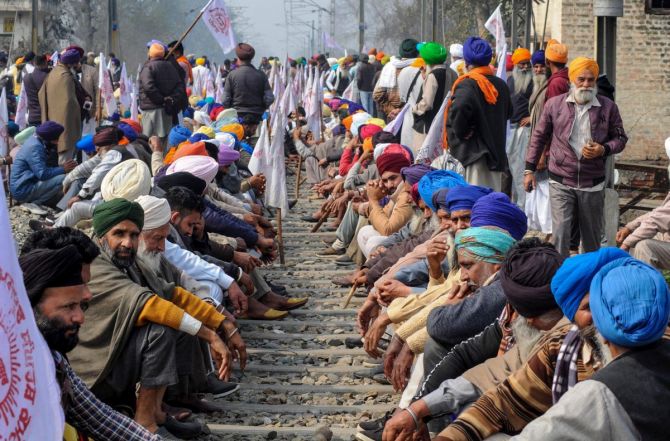 However, in many states, it was a low-key affair.

The All India Kisan Sabha claimed the agitation received 'massive response across the country'.

It further claimed that some activists were arrested in Madhya Pradesh, Bihar, Karnataka and Telangana. 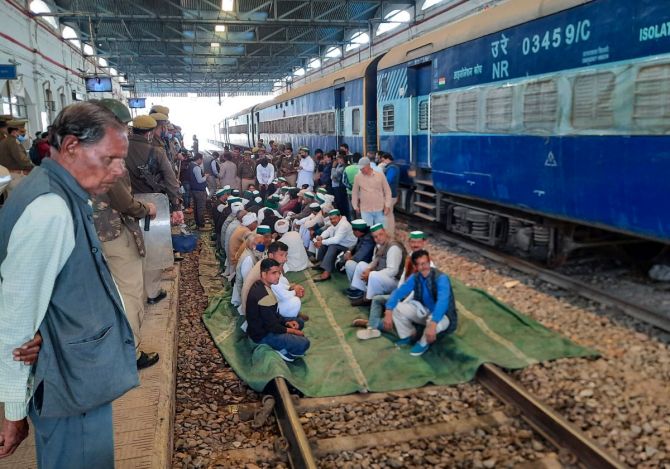 'The massive success of the rail roko struggle is a warning to the Modi government. The farmers across the country have expressed their determination to continue the struggle till the demands are met with,' the Sabha said in a statement. IMAGE: Gujarati passengers perform Garba after the train they were travelling in halted at Jalandhar Railway Station during the rail roko demonstration, in Jalandhar. Photograph: PTI Photo

A railway spokesperson said the agitation passed off without any untoward incident and there was negligible or minimal impact on running of the trains across the country. 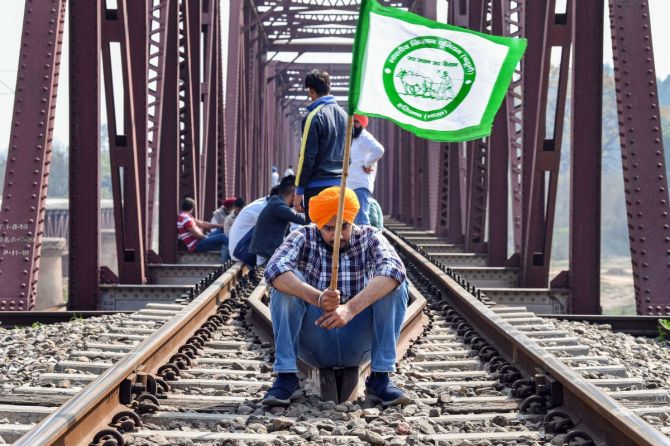 Trains began running normally across the country within an hour after the agitation ended at 4 pm, he said.

Earlier, around 25 trains were regulated by the Railways on account of the agitation called by the Samyukta Kisan Morcha (SKM), an umbrella body of farmer unions which is spearheading the protest against the three farm laws. 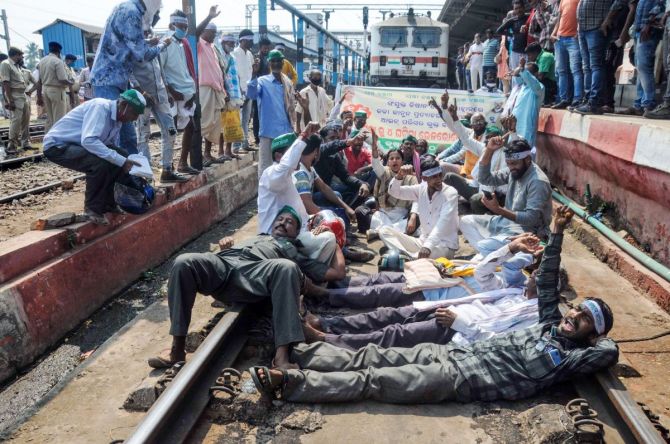 "Majority of the zones have reported not a single case of any stoppage of train by the agitators. Few trains were stopped in some areas of some Railway zones but now train operation is normal and trains are being operated smoothly.

"While dealing with the Rail roko agitation, utmost patience was exercised by all concerned," he said. 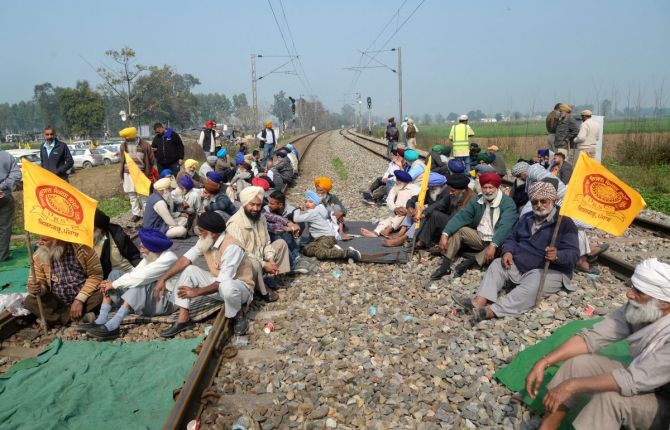 The railways deployed 20 additional companies of the RPSF across the country, especially in Punjab, Haryana, Uttar Pradesh and West Bengal. 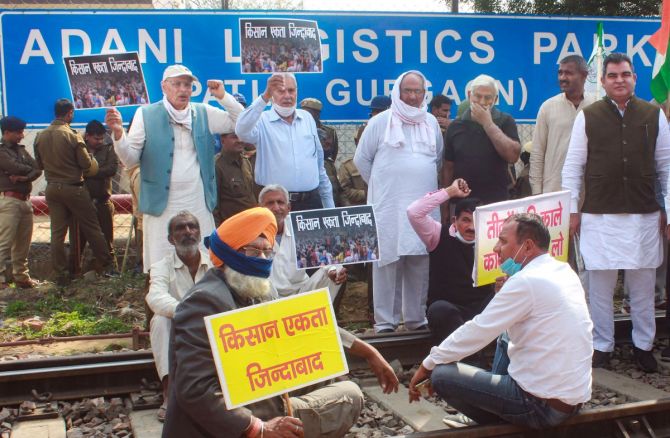 In Kurukshetra, some protesters climbed atop the Gita Jayanti Express train, which was stationary at that time, resulting in some delay.

In Punjab, protesters sat on tracks at many places on the Delhi-Ludhiana-Amritsar railway route, officials said. Farmers also blocked the Jalandhar Cantt-Jammu railway track in Jalandhar and besides a rail track in Mohali district, they said.

The Ferozepur division of the Northern Railways decided to halt trains at stations so that passengers face less inconvenience during the 'rail roko' protest. In Rajasthan, officials said that the Rewari-Sri Ganganagar special train was the only train cancelled due to the agitation, while few others were delayed.

In West Bengal too, stray incidents were reported across the state with little or no effect on rail services. 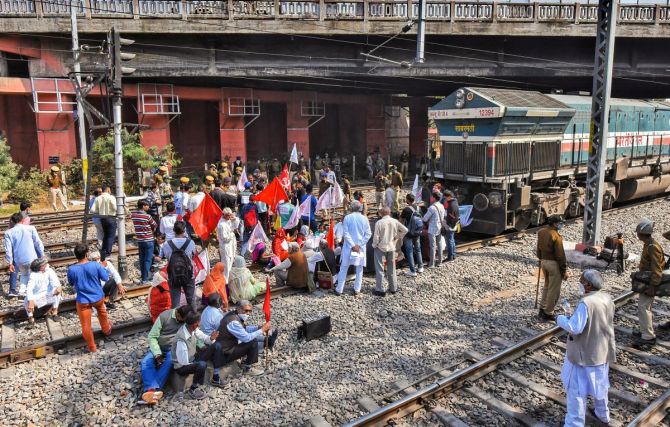 The protesters blocked the Koyna Express and shouted slogans by standing in front of trains, he said. 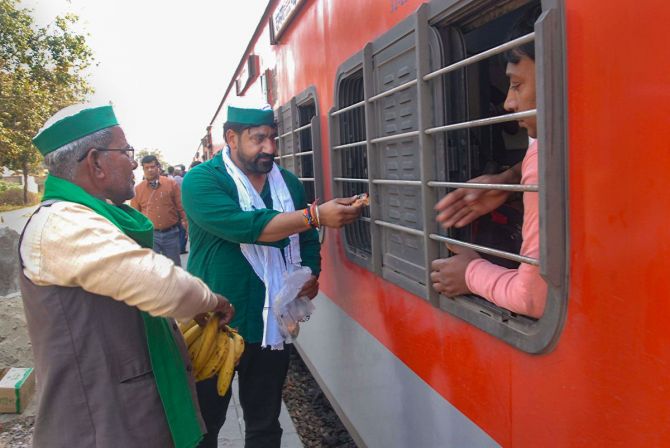 At least 12 people were detained at Lasur station, around 40 km from Aurangabad, an official said.

"The Jalna-Mumbai Janshatabdi train was stopped at the station for around 30 minutes. 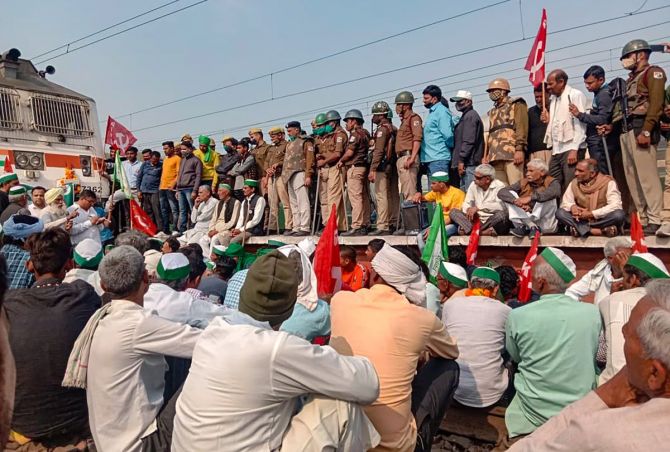 "We have detained around 12 agitators and further probe is underway," the official from the railway police said.

In Bengaluru, the protest was low-key but there was a good turnout of protesters in Raichur, Belagavi and Davangere. 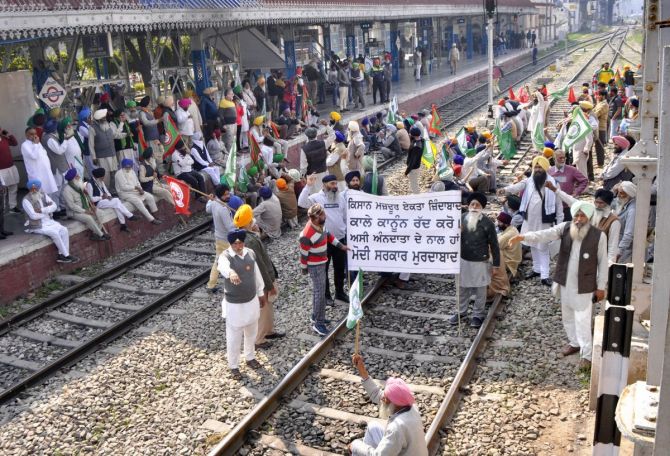 IMAGE: Members of various farmer organisations block a railway track during a four-hour 'rail roko' demonstration across the country, called by Samyukta Kisan Morcha, as part of their agitation against Centre's farm reform laws in Patiala district. Photograph: PTI Photo

In Raichur, Belagavi and Davangere, some protesters were arrested, sources said.

Thousands of farmers have been protesting since late November at Delhi's borders with Haryana and Uttar Pradesh, demanding a rollback of the Farmers' Produce Trade and Commerce (Promotion and Facilitation) Act, 2020, the Farmers' (Empowerment and Protection) Agreement on Price Assurance and Farm Services Act, 2020 and the Essential Commodities (Amendment) Act, 2020. The protesting farmers have expressed their apprehension that these laws would pave the way for the dismantling of the minimum support price (MSP) system, leaving them at the 'mercy' of big corporations. 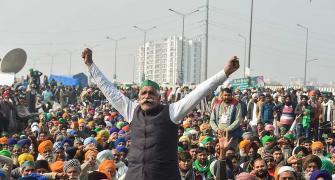