In politics, if your objective is only winning elections, just Chanakya neeti might do.
For governance you need both, Chanakya neeti and Ram Rajya.
You can neither beat up the farmers into submission, nor dismiss them as 'Khalistanis', asserts Shekhar Gupta. 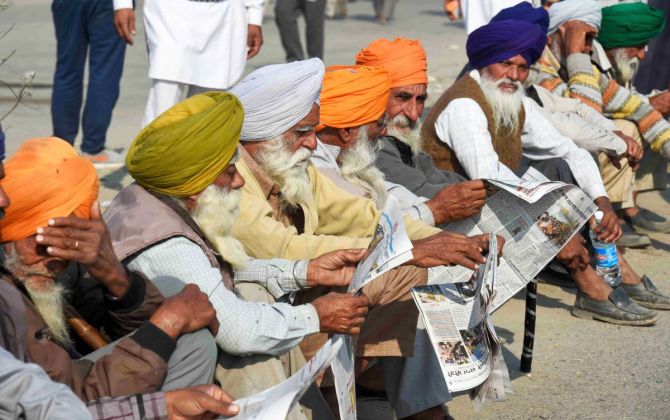 You choose the description for the Modi government's predicament on its farm reform laws.

It is a setback if not an outright defeat or surrender.

Which is tragic, because these laws are reformist and bold, and would help farmers by and large rather than harm them.

Nevertheless, all substantive reform has to be marketed politically.

The days of incremental reform by stealth are over.

There isn't any low-hanging fruit left in the reform orchard.

That's why it is important that we understand what went wrong here.

Because, an idea is only as good or as bad as those most affected find it.

In our view, here are the seven main reasons why the Modi-Shah BJP has failed to convince the farmers. Let's discuss the seventh point in some detail.

If the post-2014 BJP leaders had not been so caught up in the headiness of power and adulation, they would have asked somebody to fill them in with some earlier experiences of India.

Besides indeed all the supposed follies of Jawaharlal Nehru they'd been taught about in the 'Sangh'.

They would then have known how a supremely powerful leader, at the peak of her popularity, can go wrong and be forced to retreat.

Because then, Mr Modi would have known how Indira Gandhi erred in 1973, by nationalising all of India's grain trade.

This was her socialist peak, she was riding her post-Bangladesh Durga crest and could do nothing wrong.

This is also when the economy, reeling from the ravages of war, her dictatorial socialism, and then the oil price shock following the Yom Kippur War, was in a tailspin and inflation had reached 33 per cent.

A good account of the period is found in historian Srinath Raghavan's essay in the book Builders of Modern India, edited by Ramachandra Guha.

This was also when Mrs Gandhi had ushered in her perfect world, a Soviet-style socialist utopia in which prices of everything, including cars, were fixed.

The short version of the story is, she was persuaded by her deep pink counsels, especially her chief commissar and Planning Commission Deputy Chairman P N Haksar, that the best way to control prices was to take the markets out of the grain trade by nationalising it.

Of course, no public opinion was built.

What's the point of being a strong, supremely popular leader if you still have to do those tedious things?

This led to a disaster.

Farmers, traders, consumers were all furious.

Further, prices went up, grain shortages were back, and farmers were driven deeper into poverty.

The one person in her 'system' who saw the looming disaster and tried to caution her was a noted economist and, predictably, a Punjabi: B S (Bagicha Singh) Minhas, a graduate of Khalsa College, Amritsar; Panjab University and a Stanford PhD.

He knew the farming business and the farmer's mind.

But he was overruled.

This was the only major decision that Mrs Gandhi was forced to withdraw, and when she had no political challenge.

Once she blinked, it gave impetus to her opponents, and Jayaprakash Narayan's Navnirman Movement picked up momentum.

We do accept the contrasts in the two situations.

Mrs Gandhi tried to take the private markets away from farmers and lost.

Mr Modi is bringing more markets to the farmers and they don't want it.

In terms of the philosophical direction of the economy, the two situations are contrary to each other.

But there is no contradiction politically.

In each case, unassailable, supremely powerful and popular leaders failed to see their limitations.

Even in a classical dictatorship, like China or Russia today, there are limits to a leader's powers.

India is nowhere near that league.

In a diverse democracy there are also limits to any leader's popularity.

That's why leaders have to know the art of persuasion.

That's why his government talks of 'nudge' economics.

Or, to put it more accurately, a 'nudge' approach to the political economy.

Mr Modi did it where it was easy, as, say, with the 'Give It Up' LPG campaign, when much larger populations were involved, including his base.

He neither enjoys the same popularity in Punjab nor the unquestioning trust that he's used to in Gujarat and the Hindi heartland. 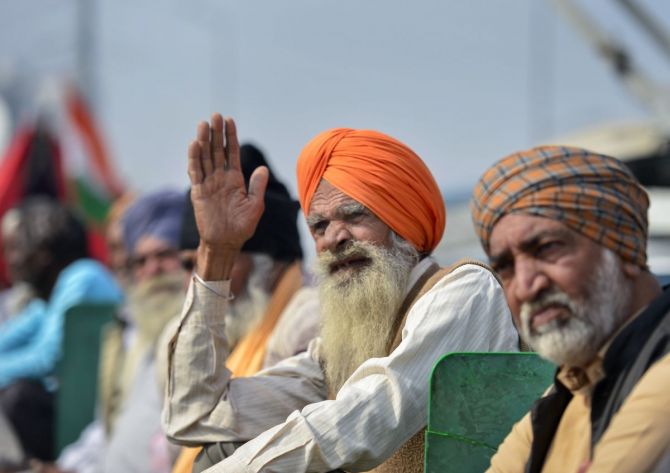 IMAGE: Farmers at the Ghazipur border during the agitation over the farm laws, New Delhi, February 3, 2021. Photograph: Ravi Choudhary/PTI Photo

If his dispensation wasn't so overconfident, if there was still a culture of his political aides and bureaucracy intervening with some counsel and caution, he might have understood that this situation was different.

And the need for persuasion, nudge, preparing the ground.

In politics, if your objective is only winning elections, just Chanakya neeti (strategy) might do.

For governance you need both, Chanakya neeti and Ram Rajya (listening to others, give and take).

You can neither beat up the farmers into submission, nor dismiss them as 'Khalistanis'.

We cannot answer these questions.

But it is evident that this ground work was missing.

It is from this lack of patience, non-understanding the limits of personal popularity in Punjab that we face this looming disaster over farm laws.

This explains the first six points listed by us.

This deserved to be the high, reformist point of Mr Modi's second term after a messed-up economy in the first.

But, as we well know, what is economics in a democracy if not politics by another name.