Launching poll campaign for the Janata Dal-United, Bihar Chief Minister Nitish Kumar on Monday ridiculed the Rashtriya Janata Dal's claim of approving 10 lakh government jobs at the very first cabinet on coming to power and wondered whether cabinet meetings were held properly during the 15 years of its rule. 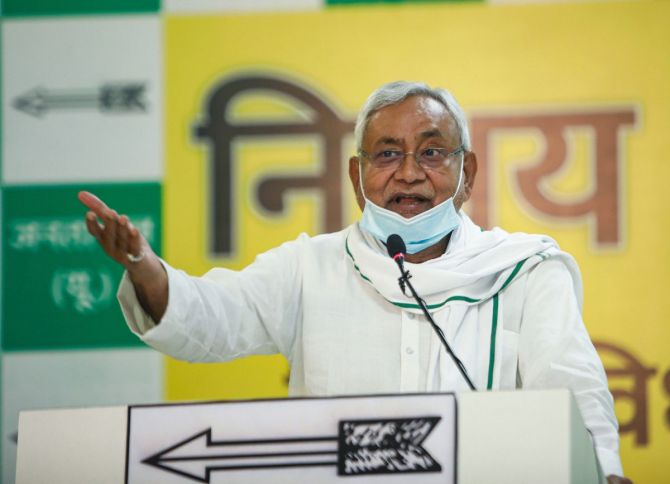 He, however, did not take any name while making light of the assertion of the opposition party on this count.

The RJD's chief ministerial candidate Tejashwi Yadav had recently announced that if the Grand Alliance headed by his party comes to power, 10 lakh government jobs will be sanctioned in the very first cabinet meeting.

"Did cabinet meetings take place properly during their time?" he asked.

Virtually addressing party workers and voters of 11 assembly constituencies that will go to vote in the first phase on October 28, Kumar highlighted the achievements of his governments during his three terms as CM since 2005, and compared those with the work done during the 15-year rule before that.

Kumar said that he would address another virtual rally on Tuesday for some other constituencies that will see voting in the first round.

Altogether 71 constituencies will be held in Bihar's first phase of Assembly election.

Seeking to set '15 years vs 15 years' as the poll narrative for the present elections, Kumar urged people to judge the developmental work done during the two equal periods and then vote.

The JD-U president said that if voters give him another chance, his government would unroll 'Saat Nischay' (Seven resolves) part II, to take up more developmental programmes in the state.

Seven resolves part I, launched by the Nitish Kumar administration for its 2015-20 term, comprised seven schemes to ensure basic necessities such as supply of piped drinking water, construction of toilets and concrete drains and electricity connection to every household. Most of the projects have been completed.

Its second part will focus on enhancing skill of youths to brighten their jobs prospect, promoting entrepreneurship among women by providing them financial assistance, irrigation facility to every agriculture field and additional health facilities for people and animals.

For enhancing skills of the youths, a separate skill development department would be formed if the NDA is voted to power, he added.