The longest-serving chief minister of any Hindi- speaking state, Nitish Kumar seems to have acquired an aura of indispensability when it comes to the highest seat of power in Bihar. 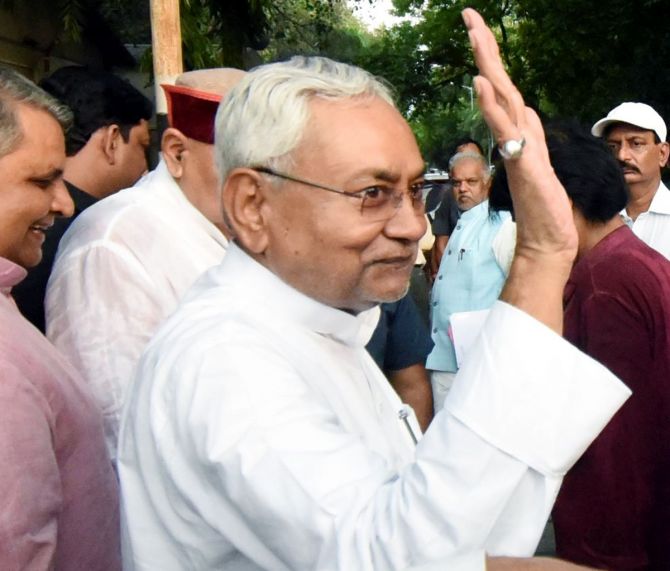 A crafty politician, he kept the Bharatiya Janata Party guessing till the eleventh hour before severing ties with the ally, following 'unanimous sentiments' in his Janata Dal-United that it was to be blamed for the party's dwindling fortunes.

Kumar then clinched a new deal in no time with the opposition which, bereft of power and coherence, welcomed him with open arms.

In a political career spanning four decades, Kumar, 71, has kept at bay taints of corruption, nepotism and misgovernance, leaving critics with little except 'opportunism' as a stick to be beaten with.

Born on March 1, 1951 in Bakhtiyarpur, a nondescript town on the outskirts of Patna, to an Ayurvedic practitioner-cum-freedom fighter father, Kumar is an electrical engineer by training.

During his days at the Bihar Engineering College, now known as National Institute of Technology, Patna, he became active in student politics and got associated with the 'JP movement', which introduced him to many of his future associates, including Lalu Prasad and Sushil Kumar Modi.

His first electoral success came in the 1985 assembly elections, which the Congress swept though he managed to win the Harnaut seat for Lok Dal.

Five years later, he moved to Delhi as an MP from the now -- abolished seat of Barh.

After another half a decade, when the Mandal wave was at its peak and Prasad was reaping its dividends, Kumar sided with George Fernandes to float the Samata Party, which would later morph into the JD-U and share power with BJP at the Centre and, 2005 onwards, in the state.

His first five years as chief minister are recalled with admiration even by critics, marked by vast improvements in restoration of law and order in a state that made headlines for massacres by rivalling militias and kidnappings for ransom.

A product of the Mandal churn, the Kurmi leader also realised that he did not have the advantage of belonging to a populous caste group and created sub-quotas among OBCs and Dalits, who were called 'Ati Pichhda' (EBC) and Mahadalits, which was resented by the dominant Yadavs and Dusadhs (supporters of Ram Vilas Paswan).

He also gave patronage to 'Pasmanda' Muslims which, besides his ability to keep Hindutva vigilantes in check, endeared him to the minority community despite an old alliance with the BJP.

Kumar brought in measures like free bicycles and school uniforms for school-going girls, which won him much adulation and the exuberant public mood saw him returning to power in 2010, leading the JD(U)-BJP coalition with a landslide victory in assembly polls.

The period, however, also saw the end of the 'Atal-Advani era' in BJP and Kumar ended up locking horns with Narendra Modi, then his Gujarat counterpart whom he never allowed to campaign in Bihar, and snapped ties with the saffron party in 2013.

He survived in power as the JD-U was formidably placed in the assembly, but stepped down in 2014, owning moral responsibility for the party's drubbing in the Lok Sabha elections, wherein it returned with a dismal tally of just two seats.

In less than a year, he was back as chief minister, elbowing out his rebellious protege Jitan Ram Manjhi with ample support from the Rashtriya Janata Dal and the Congress and came to be seen, nationally, as a potential challenger to the Modi juggernaut.

The Grand Alliance that came into being with JD-U, Congress and RJD coming together, won the 2015 assembly polls handsomely, but came apart in just two years.

Kumar returned to the National Democratic Alliance in 2017, hoping to get some traction by virtue of taking a stand against corruption taint on his then deputy Tejashwi Yadav.

His tie-up with the BJP, now in power at the Centre with a brute majority, proved to be electorally successful though his own stature seemed to diminish, as evident from the 2020 assembly poll results in which the JD-U could win under 45 seats in the 243-strong House.

The BJP's aggressive style, seeking to vanquish adversaries and gobble up allies, appears to have got the goat of Kumar, who now seems to have decided that he is better off with his former allies who showed limited ambition.

Whether common ground with his new allies with regard to communalism and social justice will be strong enough a glue to hold the coalition together will be known in the days to come.

Cynics may view the move as a survival tactic on his part, but Kumar's parting ways with the BJP has held out the promise of infusing fresh vigour in the dispirited opposition in the country.

Nachiketa Narayan
Source: PTI© Copyright 2022 PTI. All rights reserved. Republication or redistribution of PTI content, including by framing or similar means, is expressly prohibited without the prior written consent.
Print this article