After a dream debut seven years ago when he was sworn in as deputy chief minister after being elected MLA for the first time was followed by a slump in his political fortunes, Tejashwi Yadav has finally come back to center-stage as the kingmaker and deputy to Chief Minister Nitish Kumar. 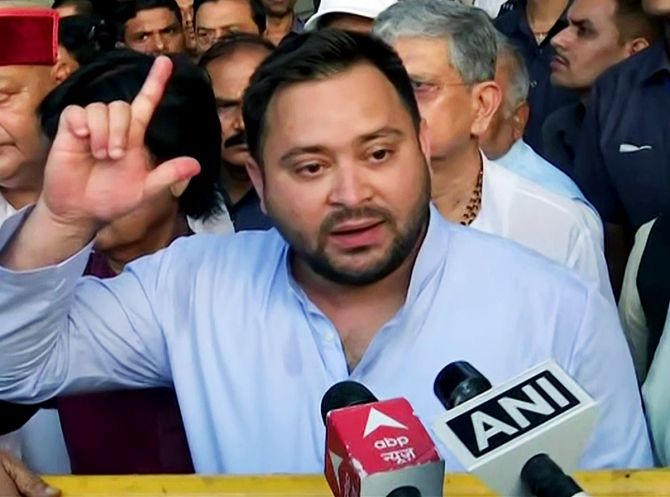 The 33-year-old younger son of the charismatic Lalu Prasad Yadav had steered the party to an impressive performance in the tightly contested 2020 assembly polls when it won the largest number of 75 seats, belying those who thought he will flounder since Prasad was in jail and the heir apparent lacked acumen.

Before Chief Minister Kumar decided to pick him as his deputy for a second time, Tejashwi was making waves as a doughty leader of the opposition, taking on the government of his father's arch-rival on the floor of the assembly while in session, as well as on the streets.

The dramatic realignment was preceded by a massive 'Pratirodh' (opposition) March against the National Democratic Alliance government at the Centre which he led on Sunday, rallying along Congress and the Left, in a clear signal that the opposition in the state had the appetite for a fight.

Born on November 9, 1989, he is the youngest of all but nine siblings and has been a clear favourite of his father who seemed to have noticed political potential in him at a young age.

Doted on by seven elder and one younger sisters, besides a temperamental elder brother Tej Pratap Yadav, the Rashtriya Janata Dal heir apparent whom family members address by the nickname 'Tarun' married his Chandigarh-based friend Rachel Iris, who has since adopted a new name 'Rajshree'.

Derided by his opponents for lacking formal education, Tejashwi had given up studies after flunking in Std IX at DPS, RK Puram.

He has, however, demonstrated an ability to read the situation he finds himself in and make the best of it.

Having decided early on in life that studies were not for him, Tejashwi chose not to cling to his cricketing aspirations after the much-needed big break eluded him though, by most accounts, he was a competent all-rounder.

He announced his 'retirement' from cricket just a couple of years before entering politics in 2015, at the tender age of 25.

The new vocation came as a perfect pitch to bat on as he won from Raghopur in the assembly election comfortably, thanks to a formidable, albeit short-lived alliance forged by arch-rivals Kumar and Prasad.

In addition to being his father's favorite, Tejashwi exuded a maturity that was beyond his age which certainly played role in his rise.

As fate would have it, Tejashwi's name cropped up in a money laundering case, relating to illegal land transactions involving his father's tenure as the railway minister in the United Progressive Alliance-1 government, when the scion himself was in his teens.

The development drew heavy opposition fire and the Janata Dal-United leader, conscious of his reputation for probity in public life, snapped ties with the RJD and ended up making a hasty return to the NDA.

Tejashwi took the sudden loss of power in his stride and worked to keep the RJD party afloat while his father ended up behind bars following convictions in a number of fodder scam cases.

Questions were raised about his ability to lead the party and the Grand Alliance after the Lok Sabha elections in which the opposition coalition conceded 39 out of 40 seats to NDA and the RJD itself drew a blank.

He was ridiculed, by the then ruling JD(U)-BJP combine, as an 'ill prepared student afraid of facing exams' when he demanded that the assembly elections be deferred in view of the global pandemic.

However, once the poll schedule was announced, the fire in his belly was there for all to see.

Tejashwi displayed ruthlessness in shunning dissenters and guile in winning over allies, including the Communist Party of India-Marxist-Leninist which has been bitterly opposed to the RJD especially since former Jawaharlal Nehru University president Chandrashekhar was gunned down, in the early 1990s, allegedly by henchmen of the local MP Mohd Shahabuddin.

Naysayers may think that he has short-changed himself, meekly accepting a deputy's instead of waiting it out till the Chief Ministership could be up for grabs.

Supporters will, however, be on a roll in their belief that he has given it back to the Bharatiya Janata Party which had snatched power from the RJD through a 'backdoor entry' five years ago.

Nachiketa Narayan
Source: PTI© Copyright 2022 PTI. All rights reserved. Republication or redistribution of PTI content, including by framing or similar means, is expressly prohibited without the prior written consent.
Print this article 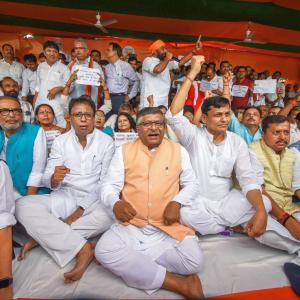 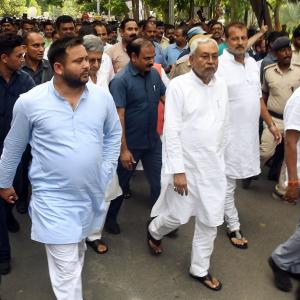