In a fiery "point-by-point" rebuttal to Congress's charges on the Rafale deal, Defence Minister Nirmala Sitharaman on Friday accused it of spreading "falsehood" on the issue and said while the Bofors scam brought the party down, Rafale will help Prime Minister Narendra Modi retain power. Wrapping up a rancorous debate in Lok Sabha, Sitharaman, in her over two-hour speech, also accused the Congress of stalling the contract during its rule because it "didn't get the money", asserting that there was a difference between a defence deal and dealing in defence.

Immediately after she began her reply, Congress leader Mallikarjun Kharge demanded that the prime minister should come to the House and respond on the issue. Speaker Sumitra Mahajan, however, rejected his demand and said only "she will reply".

"Bofors was a scam, Rafale is not. Bofors brought you (Congress) down. Rafale will bring Modi back to (power) to have a new and transforming India and remove corruption which is stinking around the Congress," Sitharaman, the first full-time woman defence minister of India, said.

Forcefully rejecting charges of corruption in the Rs 58,000 crore deal for procurement of 36 Rafale jets from France, she also said, "Defence Ministry has been functioning without dalals (middlemen) during five years of (Prime Minister Narendra) Modi. Rafale is a decision in national interest."

The Congress has been targeting Modi on the deal alleging that price of each aircraft was sharply hiked from around Rs 526 crore, negotiated under deal during UPA, to Rs 1,600 crore and that the contract will help Anil Ambani get Rs 30,000 crore benefit through offset contract.

Sitharaman blamed the UPA of 'ignoring' the country's defence needs and doing nothing at a time when neighbouring China and Pakistan were strengthening their respective air forces.

She said while the decision to acquire fighter aircraft was hanging fire, the neighbouring countries were adding modern aircraft to their fleet.

"I would want to give you the picture of how we stand precarious sometimes in decision-making and it is requirement for the leadership to take that call.

"How was our neighbourhood developing in the last 10 years? China added 400 aircraft between 2004 and 2015. Fourth generation fighter aircraft like J-10, J-11, J-16, Su-27, Su-30 were all being added to the Chinese arsenal. Even fifth generation stealth fighters were being added," she said.

She said Pakistan too increased its total number of aircraft by more than double.

They had bought in F-16s and JF-17 class Chinese aircraft to their force, the minister said.

Sitharaman also slammed Congress President Rahul Gandhi for accusing Modi of "lying" on the deal and alleged that the procurement procedure for 126 Rafale negotiated under the UPA government did not fructify as "it didn't suit" Congress and it "didn't get the money".

"The Congress is spreading falsehood on Rafale," she said and even referred to the Supreme Court's ruling last month giving a clean chit to the government on the decision-making process of the deal.

After Sitharaman's address, Gandhi said she gave a long speech but did not answer any of his questions on the deal and "ran away". He said if the Congress comes to power in 2019, a criminal investigation will be launched into the deal and those found guilty will be punished.

In her speech, the defence minister said, "The Congress did not intend buying the jets. For every 'AA' there is a 'Q' and 'RV'," apparently referring to Robert Vadra and also Ottavio Quattrocchi, the alleged middleman in the Bofors scam. Gandhi has been referring to Anil Ambani as 'AA'.

Taking a jibe at the Gandhi family, she also said, "I do not have the benefit of the 'khandan tag'" while invoking her humble middle class background as well as of Modi's poor economic past.

"Nobody has a right to call me or the prime minister a thief and a liar," said a visibly angry Sitharaman.

She also accused the Congress of shedding "crocodile tears" on the HAL (Hindustan Aeronautics Limited) not getting the offset contract from Dassault Aviation, the maker of Rafale jets.

Countering the Congress's charge, she said that it was the Indian Air Force which suggested that the government buy two squadrons or 36 Rafale jets in fly-away condition instead of 18, as was planned to be purchased under the Congress-led UPA government.

She accused the Congress of compromising with national security in the interest of the party's "treasury" while deciding on buying 126 fighter jets.

Under the deal finalised by the NDA government, the delivery of first Rafale will happen in 2019, while the last of 36 jets will be delivered in 2022, the minister informed the house.

On pricing difference, Sitharaman said there was no formal price noting by the Congress of Rs 526 crore as the deal price. But the price negotiated by the NDA government is nine per cent lower than what was negotiated by the UPA.

"Comparing the cost of Rs 526 crore with Rs 1,600 crore, is like comparing apples to oranges. The cost quoted in 2007 will it remain the same in 2016, because there is escalation cost and there is exchange rate variation," she said.

Referring to negotiations of the Rafale deal during the rule of the Congress-led UPA, the minister said, "You stopped the deal, forgetting Air Force was suffering.

"You didn't conclude the deal, because it didn't suit you. The deal didn't get you money," she alleged.

"They did not intend to buy the aircraft till something else was done. There is something different between defence deal and deal in defence," she said, asserting that the Narendra Modi-led government gave priority to national security.

"You are misleading the country by saying the NDA government reduced 126 Rafale jets to 36. The Congress was supposed to buy 18 in fly-away condition, the NDA raised that to 36," she said.

Talking about ADAG group, which got the offset contract for the fighter jet deals, the minister said the company obtained 53 waivers and concessions during the Congress-led UPA regime.

While countering Gandhi's claim that a French leader had told him that there was no secrecy clause in the deal, Sitharaman asked the Congress chief to authenticate his claim on the floor of the house.

Defence minister 'ran away' from my questions on Rafale: Rahul

Congress president Rahul Gandhi said defence minister Nirmala Sitharaman gave a long speech in Parliament but did not answer any of his posers on the Rafale deal and "ran away".

Gandhi's assertion came after Sitharaman gave the government's reply on the Rafale fighter jet deal issue in the Lok Sabha.

"The defence minister did not answer any of the questions I asked on the Rafale deal. She did not even take the name of Anil Ambani," Gandhi told reporters outside Parliament.

Gandhi said he put two questions to the minister towards the end of the debate and asked her to reply in yes or no.

"I asked that after a long negotiation process, those people who participated in that negotiations -- Air Force chief, defence minister, secretaries, Air Force officials -- when the prime minister did a 'bypass surgery'... did the Air Force people object, yes or know," Gandhi said.

"And you saw that instead of answering this, the defence minister started doing drama that 'I have been insulted, I was called a liar'," he said.

Addressing the country's youth, Gandhi said the minister was attempting to mislead them.

It was a straight question and without answering that she "ran away", the Congress chief said.

"The PM cannot come (to Parliament), and the chief minister of Goa is saying I have a file and I will get back at the PM. She gave a two-and-a-half hour speech and did not answer any questions," Gandhi said. 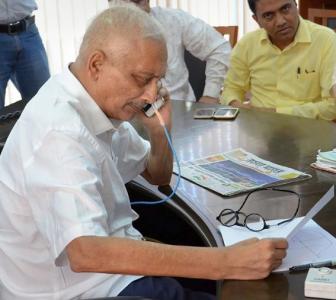 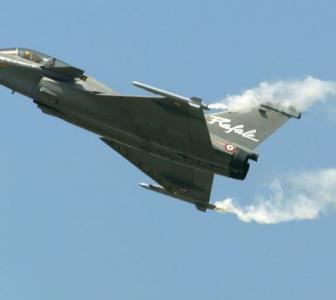 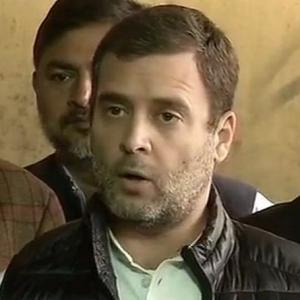 Criminal probe in Rafale scam if we come to power: Rahul